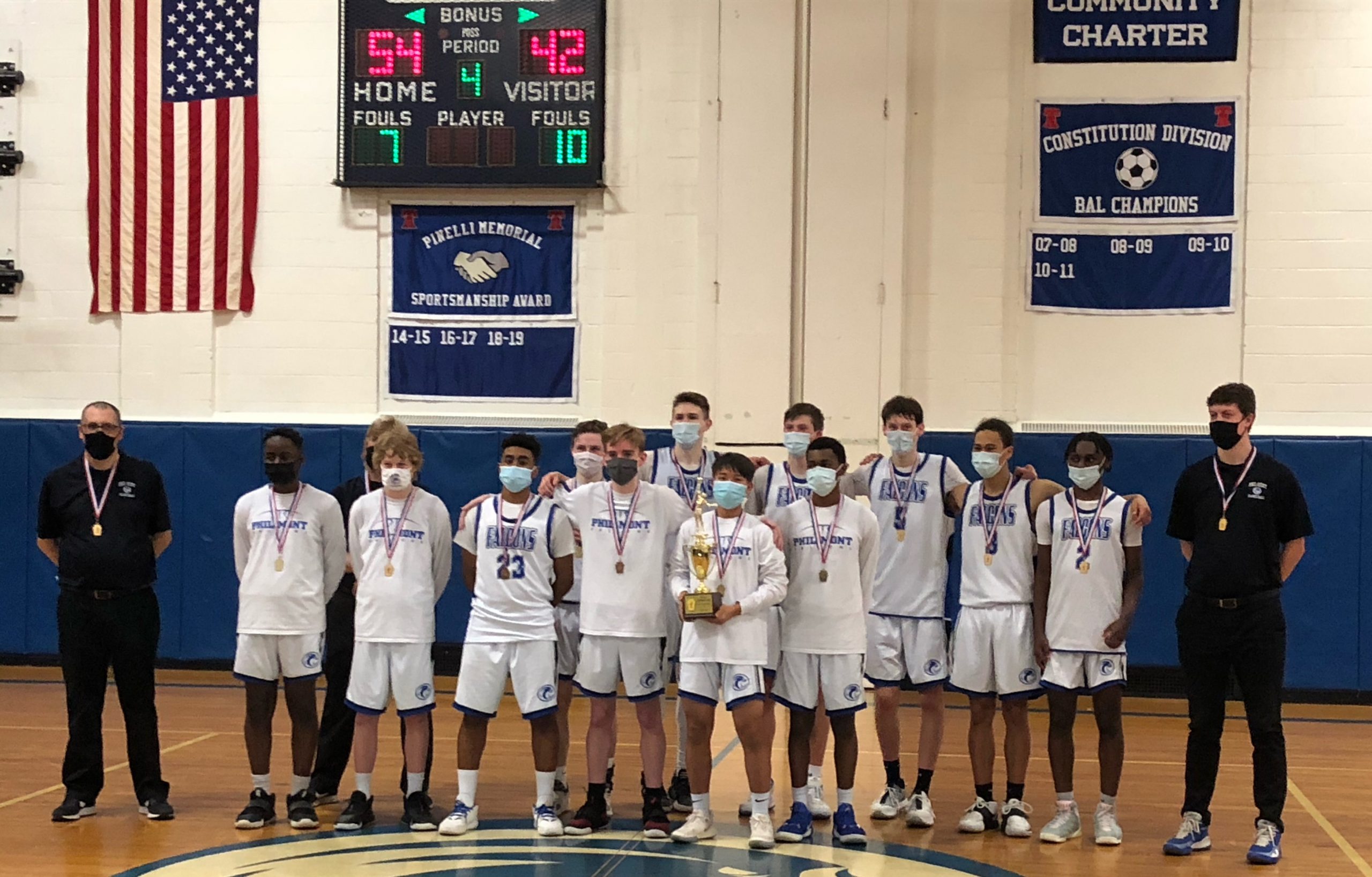 SPRINGFIELD >> Instead of giving a rousing pregame talk, Phil-Mont Christian Academy boys basketball coach Glenn Dolton let his players decide what their keys to the game would be.

Facing No. 2 seed Jenkintown for the third time this winter and with a District 1 Class A title and trip to states on the line, the No. 1 Falcons not only outlined their path to victory but went out and followed it.

A hot shooting start and strong second half by junior David Olinger helped the Falcons win their first district title since the 2015-16 season, defeating the Drakes 54-42 on Thursday.

“I told them ‘I talk to you about the same stuff all the time,’ and asked them what it was they wanted to accomplish tonight,” Dolton said. “They did a lot of the stuff they were talking about in there, so I’m proud of them. They know what they’re supposed to be doing and stay within their roles.”

The teams split their regular season meetings with each defending their home court and a quick start playing an important role in those games. Thursday, the Falcons emphasized that again and couldn’t have asked for a much better opening stanza.

Thom DeHeer came out looking to be aggressive and did so with nine early points as the Falcons opened up a 13-6 lead with 2:32 left in the first. Phil-Mont shot 6-of-7 from the floor in the first quarter with a smooth 3-pointer by Trevor Tipton giving the top seed an 18-8 advantage after one.

Jenkintown, playing in its first district final since 2015, got a little sped up on offense early while Phil-Mont was crisp in its execution.

“We started in a hole and kept fighting back but it seemed like every time we had a little spurt they would make a play to get the momentum back,” Drakes coach Wes Emme said. “That’s a credit to the leadership on their team and their coaching staff. That’s how it goes and we got beat by the better team tonight.”

Phil-Mont didn’t keep up its torrid shooting pace but still executed well enough to take a 27-17 lead at halftime despite a buzzer-beating 3-pointer by the Drakes’ Emmet Tweh.

With Jenkintown focusing its defense on Tipton and Nathan Blackburn, things opened up for Olinger to take over in the third. The 6-foot-4 junior played a terrific game with a team-high 19 points on 8-of-10 shooting to go with 11 rebounds and was a matchup problem in the post.

“I never know how I’m going to get those layups on offense, I just go with whatever’s open,” Olinger said. “I’ve always had Trevor on my team, he draws a lot of attention but it comes down to the connection we all have.

“There was a play where Thom DeHeer was on the wing and he didn’t even look at me, but I knew the pass was coming. We practice so much, most of these guys have been together since we were on the middle school team here so we’ve been building that up.”

Olinger scored eight on a perfect 4-of-4 shooting in the third but he was also a big factor on defense, grabbing a quartet of rebounds, blocking a shot and turning a steal into a layup. As a freshman, he and Tipton were on the Falcons team that lost a four-overtime heartbreaker in the district semis against Faith Christian, something that’s motivated them ever since.

Tipton still had a productive game, scoring 17 points while Blackburn had nine. Dolton also cited the play of Calvion Brown, who didn’t score but played excellent defense that helped get the Drakes out of sync.

“We always talk about finding a way,” Olinger said. “I’m often surprised by how some of these guys do it while keeping on top of their school work. Coach Dolton, we know how much work he puts in to let us have these opportunities together so it just encourages us to work even harder.”

The season ends for Jenkintown and its six seniors a win short of the state playoffs they had so hoped to reach, but their impact is undeniable. Emme admitted he was already fighting emotions to talk about the seniors – Tweh, Jadan Welsh, Sean Mizzoni, Cole Krinvic, Will Krinvic and Roan McCall – but couldn’t have asked them for anything more.

“They were a part of changing the culture back and that’s how I’m going to remember this team,” Emme said. “They helped turn things around. In small-school basketball, one person makes that big of a difference and this year we had a group that made that difference. I feel strongly about each and every one of them and the path they’ve taken to get here and I wanted them to play in the state tournament.”

Emme has competed against Dolton as a player and now a coach and after the Falcons took their team photo with the district trophy, the coaches shook hands as Emme wished Phil-Mont luck in next week’s PIAA opener. Dolton called every game with Jenkintown a “war” and felt his team had to play as well as it did Thursday to get past the Drakes.

After a couple of agonizing losses in the postseason since their last title in the 2015-16 season, the Falcons got to hoist the district trophy Thursday and now get a chance to continue their season.

“They’ve been terrific with their focus,” Dolton said. “They were on Zoom workouts, they were out in their driveways doing stuff, I’m so proud of them because they were so committed to the program and they’re just terrific kids.”

District Tournament heating up: A look at the remaining matchups
Lower Merion holds off Cheltenham in District 1-6A quarterfinals