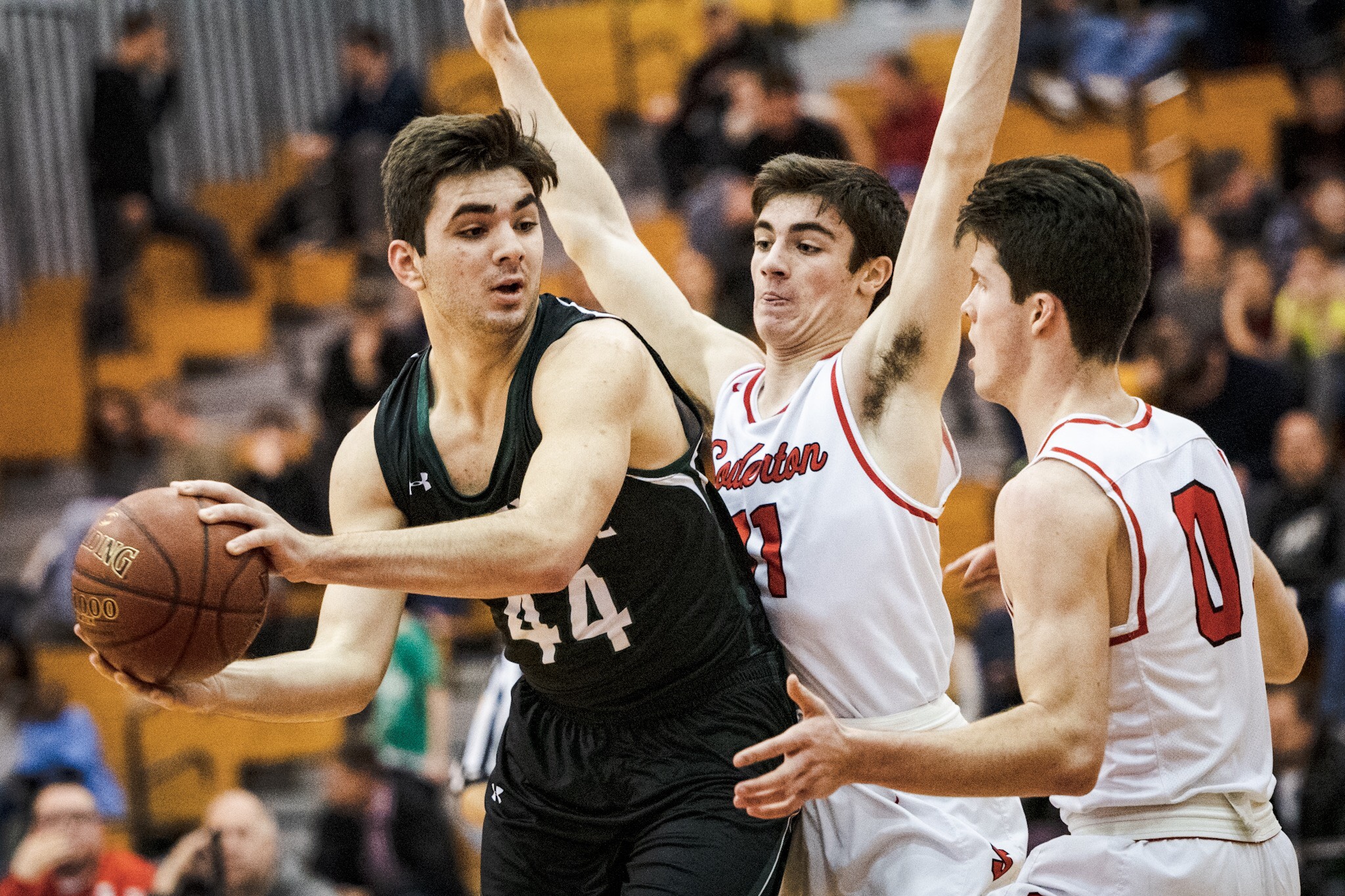 FRANCONIA >> Pennridge boys basketball coach Dean Behrens has been looking to see if the Trent Fisher could make a more forceful stamp on games.

“Sometimes it’s just like be a little more assertive,” Behrens said. “Be assertive. He’s a big, friendly guy, he’s a friendly guy. I want him to have a little bit more of a mean streak, not in a negative sense but really fight under there.”

Friday night, the 6-foot-6 junior forward came out and made an early impact, helping the Rams start fast in their first game in a week.

Fisher provided nine points in the opening quarter — including knocking down a 3-pointer — as Pennridge jumped out to a 21-10 lead over host Souderton after the first eight minutes of their Suburban One League Continental Conference matchup and rolled from there for its 12th win in a row, topping the Indians 68-40.

“I’ve been working on my shot a lot,” Fisher said. “Coach has been telling me to shoot the ball and be more comfortable shooting the ball. It was working for me tonight.” Fisher finished with 11 points as the Rams (16-2, 8-1 conference) returned from a seven-day break to maintain its spot alone atop the Continental. Pennridge last played Jan. 25 — edging Central Bucks West at home 51-50 — and was set to host Central Bucks South Tuesday but snow postponed that contest to Monday.

Sean Yoder had a game-high 15 points while Jon Post added another 11 points for Pennridge, which took firm control with an 18-2 run in the third that put it the Rams up 51-25.

“We were ready,” Fisher said. “We had two great practices back-to-back days and then we came out here tonight and took care of business.”

Friday was the start of the schedule getting busy again for the Rams, who finish the regular season with a five games in seven days sprint. Pennridge is back in action Saturday hosting District 3 power Reading at 4:30 p.m.

BOYS #BASKETBALL: @PennridgeSports’s Trent Fisher with a block on the one end which leads to a 3️⃣ from @jonathan_post_ on the other 1Q vs. Souderton. pic.twitter.com/q5zT4KMjGT

“We wanted to play CB South, that was a big game,” Behrens said. “But obviously they played on Wednesday cause they already had a game scheduled so we couldn’t do that so the next game was Souderton. So we actually got two practices, we practiced on Wednesday and Thursday to prepare for this.

“So our motto is was we got a seven-day journey. Five in seven, so now we’re four in six. So we’re going to play Reading tomorrow, which is going to be awesome to bring them to our gym.”

“Obviously things weren’t going our way, they were making a lot of shots and it’s just got to come down to the defensive end of the floor,” Vince said. “Just defensive intensity, I think. That was just the big problem, it just wasn’t there tonight.”

“We really were just focusing on shutting down Yoder, doubling him whenever we can, blitzing screens, just shutting him down,” Vince said. “I think that started to play a factor in the second quarter but just their other role players like Fisher hitting key shots that really kept them flowing and kept them in the game.”

Souderton looks to finish its season on a high note Thursday when it hosts Quakertown at 7 p.m. “All you can do is give it your all every single game,” Vince said. “We’re really doing that pretty well it’s just when you’re playing in a league like this it’s very tough. But to get those wins it’s really about focus in practice.

“I think definitely next year we’re going to have a lot of guys returning, only graduating two seniors so I think we gained a lot of experience this year and just keep that mentality and keep it going for the next year.”

The Indians scored the last three points of the first half to get within 35-21 while Mekhi Williams’ two free throws at 6:55 in the third had Big Red’s deficit down to a dozen.

Pennridge, however, proceeded to doubled its lead by collecting the next 12 points — six coming from Post, the senior Eurostepping in transition for a left-handed lay-in for a 47-23 lead.

“Our legs were rested,” Behrens said. “We had two good practices. We haven’t been going quite as hard or as long. Looking at a little bit more film, trying to keep some of our guys healthy and it’s paid off. And our kids have been focused, which is awesome, so we talk about being mentally and physically prepared.”

BOYS #BASKETBALL: @PennridgeSports’s Christian Guldin banks in a runner and is fouled 2Q vs. Souderton. Guldin made the free throw to complete the 3-point play. pic.twitter.com/kWYPEyxSKu

The Rams extended their lead to 26 at 51-25 before ending the third quarter up 51-28. Seven straight points to start the fourth gave the Rams its biggest lead at 58-38 which they matched again 68-38 in the game’s final minute.

In the first quarter, Zach Thatcher scored off a drive to pull Souderton with 13-9 but Fisher and Post knocked down back-to-back 3-pointer to put Pennridge up 10.

“I love shooting from the top of the key and the corner,” Fisher said. “Trying to just keep in rhythm and keep that consistent for the season.”

A John Dominic basket made it 21-19 before a Brian Reiner free throw at 26.4 seconds had the margin at 21-10 entering the second quarter.

After Yoder’s jumper gave Pennridge a 13-point advantage, Souderton had the margin down 23-16 when Vince connected on a jumper. Jack Gillespie’s three to make it 26-16 Rams was answered by a Dom Natale drive but Christian Guldin’s 3-point play on a runner at 3:03 was the start of nine straight points for Pennridge, giving the visitors their biggest lead of the first half at 35-18.