Pennridge getting early start thanks to Dock summer league 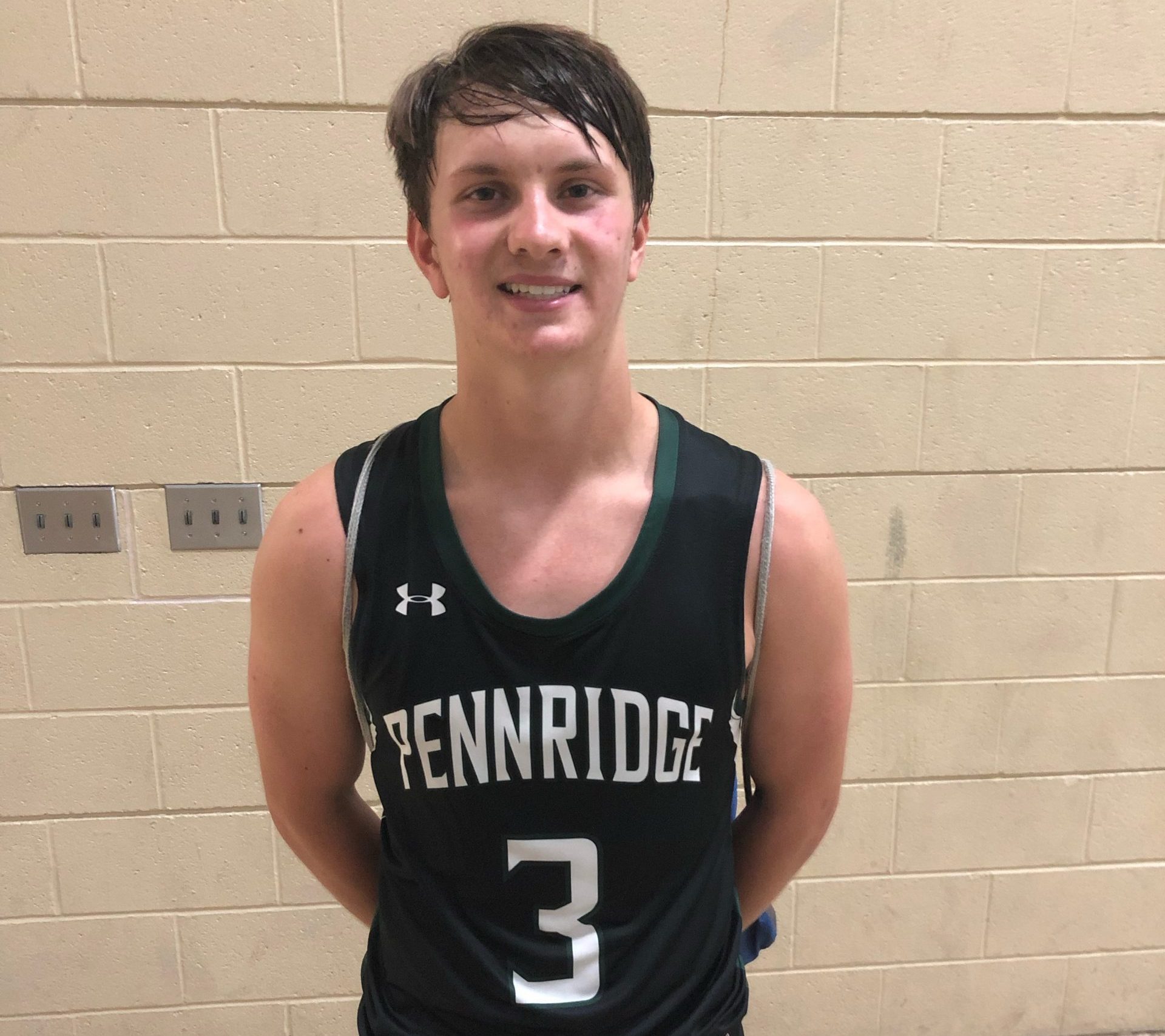 Pennridge senior Justin Nichols and the Rams are getting some offseason work in at Dock Mennonite's summer basketball league. (Andrew Robinson/MediaNews Group)

TOWAMENCIN >> Dean Behrens was back in his element.

It was the second game of a summer league back-to-back, but the longtime Pennridge boys basketball coach was as animated as ever on the makeshift sideline. After last year, every opportunity to be in a gym is anything but a given and with a team that’s short on experience but brimming with enthusiasm, Behrens wasn’t going to tone it down.

Pennridge is one of many teams getting a jump-start on the 2021-22 season at Dock Mennonite’s boys basketball summer league.

“This time last year, I was sitting around doing nothing, so it’s very nice to be back,” Behrens said. “(Tuesday) we have a workout with the boys in the weight room, our JV league Wednesday and then back in the weight room so we’re starting to get ourselves back into this. The whole idea here isn’t winning everything, but to evaluate what we have on the floor.”

The league is in its fourth year (there was no 2020 league due to COVID-19) and is more popular than ever, with Dock coach Mike Fergus expanding from one night per week to two and upping the total membership to 18 squads. With teams from the SOL, BAL and PCL, there’s a nice mix of schools from different classifications, styles and experience.

Pennridge, which went 13-6 overall and 6-4 in the SOL Colonial this season, was able to endure the lack of a true offseason last year thanks to a veteran returning core. That’s not the case this year, with the Rams needing to replace three All-SOL graduated starters in Luke Yoder, Colin Post and Colin Monahan.

So, being back in the gym for some summer reps is a major, major plus.

“We need this,” Behrens said. “It’s a good group, a fun group and they’re excited. When we would score, the bench was excited and there was a lot of energy. It’s going to be an interesting year for us, we don’t have a lot of experience but we’re looking forward to this team getting better each time we’re with them.”

Rising senior Justin Nichols is one of the few returners with significant varsity experience and he used most of his minutes on Monday to run the show. Behrens called the guard an extremely coachable player, but also a reliable one and the guy he usually points younger players to when they need to be put on the right path.

Nichols, who made some nice passes and hit a couple jumpers in the team’s second game Monday, said he likes the chemistry and energy the group is showing this offseason. The Rams had solid attendance with 12 players on Monday for games against Phoenixville and Central Bucks South and even if it did make rotations a little tricky, everyone got some run.

“It’s super-important for us, we know we’re the underdogs this year,” Nichols said. “We don’t have much size, but we’re going to come out and fight every single game and we’ll be ready. Last year, we didn’t have anything then we the season started, it got cancelled for a few weeks so having this back is huge for getting us prepared.”

The Rams have been a part of the league since Fergus started running it in 2017 and they’ve benefited from it quite a bit over the years. Aside from putting different potential lineups together and the reps, Pennridge has unearthed a few gems that would go on to make an impact in ensuing seasons.

Notable among them were John Dominic, Pat Gillespie and Jack Gillespie, who were integral role players when the team reached the PIAA 6A title game in the 2018-19 season.

“We’re not reloading all the time, we need the guys who play a lot on JV and their senior year, they blossom,” Behrens said. “We’ve lived off of that. I mean, the team that went to Hershey, I had three kids in that varsity lineup that never played as juniors and a lot of it was, they played well here and that’s what opened my eyes.”

The Rams may have a few contenders lining up for those spots already. Nichols cited junior Matt Campione, a perimeter sniper and the other returning experienced player and Jack Buesing as two standouts early in the summer. Behrens added forward Jude D’Agostino and guard Justin McCormick, both rising seniors, as two players who have stepped up since offseason workouts began.

Even in a season altered by COVID-19, the Rams qualified for the District 1 6A playoffs before dropping their opening game in a tight contest against Perk Valley. While they’re far from a finished product as July approaches, if they keep trending the right way, the Rams figure to be in the postseason hunt come next winter as well.

“Just play with confidence,” Nichols said. “For all high school players, that’s a huge thing. We have really good chemistry, we know where our guys are going to be and we’re always ready to help each other out.”

Dock’s league runs Monday and Wednesday nights through the final week of July.