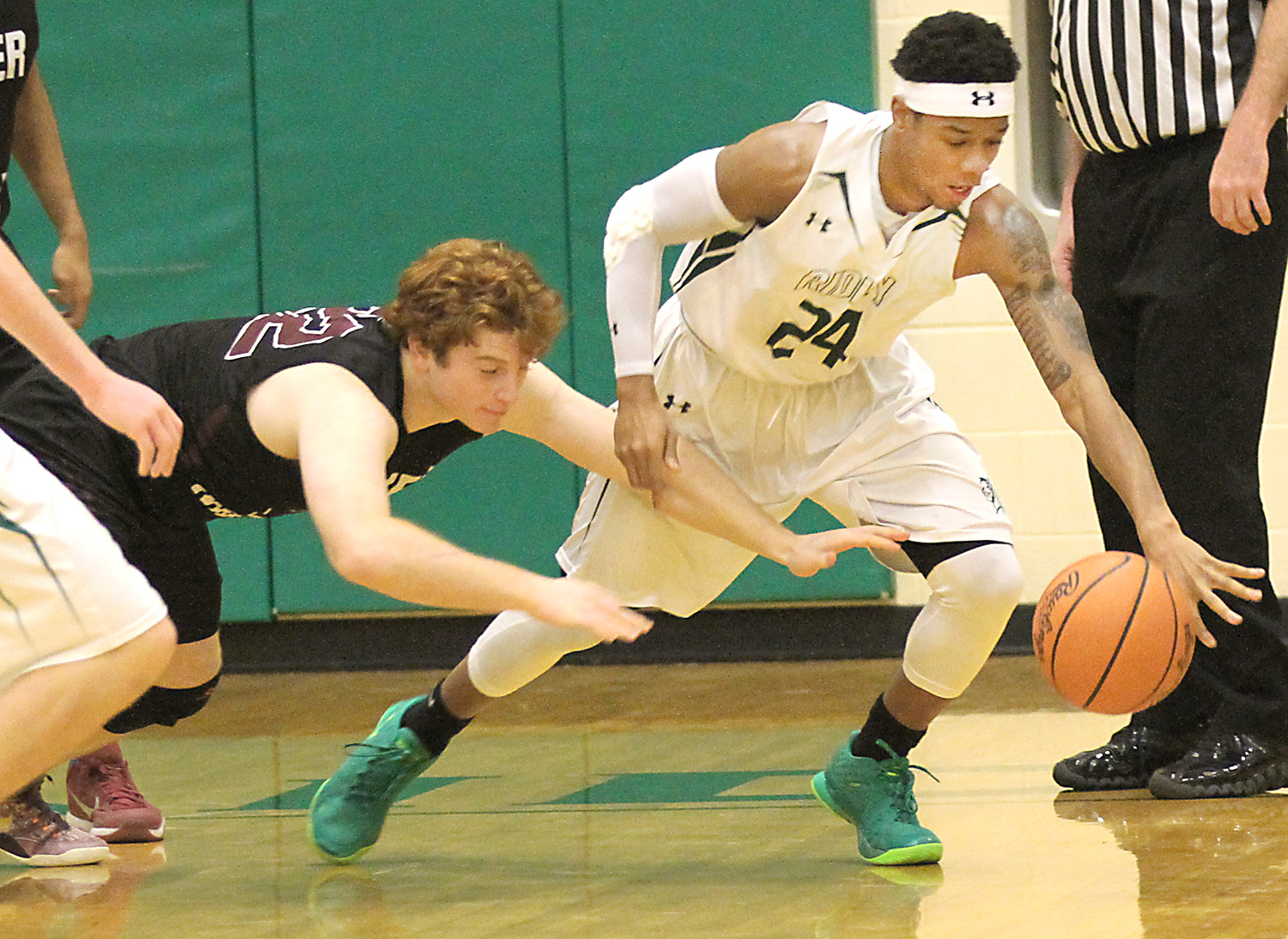 RIDLEY TWP. >> When you ask Ridley’s Mike Patterson how tall he is, the senior forward will offer a 6-foot-4, before sheepishly covering with, “or, maybe 6-5.”

In contrast to Patterson’s unassuming height, there was no doubting the vertical credentials of his opponents Friday, Lower Merion’s tandem of 6-9 Jeremy Horn and 6-6 Dion Harris, with his outsized leaping ability.

Yet by the time Patterson marched to the bench to a grateful ovation with 3:21 remaining, making way for the subs to play out a 61-40 demolition by the Green Raiders, there was no doubting that Patterson stood tallest.

The senior collected a career-high eight points — heck, he’d scored 12 combined in 10 appearances this season — but saved his best efforts for the defensive end, completely muzzling Horn and Harris.

“When you go up against a guy that big, you want to make sure you’re lower than him,” Patterson said. “It’s hard to defend against him, but you have to go hard and give 110 percent. That’s what coach always preaches.”

Paradoxical as it may sound, Patterson’s approach withstood a hearty test to keep the Green Raiders (11-0, 7-0) unbeaten and with a stranglehold on first place in the Central League.

Horn, coming off a 23-point performance against Radnor, was nonexistent on the offensive end, scoring three points and not attempting a shot after the first quarter thanks to Patterson’s persistent hounding. Horn grabbed four rebounds, same as Patterson, as the Aces (9-3, 5-2) were throttled on the boards, 34-18. The center spent the fourth quarter as a spectator as Lower Merion heaved up 3-pointers in a futile attempt to get back in touch.

Harris had eight points, but the inability to feed the post to consistently generate offense prevented the Aces from finding any semblance of rhythm.

That wasn’t an issue for Ridley, which went with the flow forced by the myriad looks assembled by Gregg Downer’s constantly shifting defense. When the Aces went zone, the Green Raiders shot over it, hitting eight of 13 looks from 3-point range in the first half. They used excellent ball movement (nine assists on 14 made first-half buckets) to exploit soft spots.

All that early hot shooting wasn’t a reason for halftime celebration, even if a wave of momentum accompanied the Green Raiders into the locker room when Brett Foster nailed a buzzer-beating triple to stretch the margin to 10 points, Foster’s fifth make out of five attempts.

Brett foster does not care for your defense! To the half, Ridley 37, Lower Merion 27 https://t.co/JwrY8hrmkW

Instead, the trifecta was held up as a cautionary tale.

“We definitely don’t want to rely on the 3-ball too much,” said Ryan Bollinger, who finished with 13 points. “We’re told not to fall in love with it. We took a good amount, but we made them.”

“That’s always a tough dilemma for high school kids because sometimes we make some 3s and we fall in love with it and we keep shooting them and shooting them,” Ridley coach Mike Snyder said. “… The 3-point shot can become your enemy also. We need some drives, some short pull-up jumpers and some layups, too.”

After halftime, the Green Raiders pivoted again. They took three and a half minutes to score, allowing Lower Merion to inch to within five, powered by Terrell Jones’ 14 points. But Bollinger chose his spot and hit a quick 3, spurring a 16-4 run that closed matters.

For all the attention paid to Foster, who scored 22 points, and Julian Wing (11, all in the first half), the third-quarter distancing came on the back of the role players. Foster scored just one point; Bollinger had seven, Patterson added four.

“Brett and Julian are the main focus for other teams,” Bollinger said. “It gives all the other guys opportunities to get open and make their own plays.”

The last of those was the most apropos of the night. After Foster missed a free throw with two seconds left on the clock, Patterson spun out of a sandwich of Aces in the low block and tipped in a rebound as the buzzer sounded, a play that typified the hustle of the effort and sent the Aces back to their huddle mystified.

“I saw the guy come in to me, so I gave him the spin because he was leaning in to me,” Patterson said. “I just kind of went up and tipped it in. Just hustling.”

Four minutes later, with the Aces stuck at a whopping nine second-half points, Downer signaled his reserves off the bench, formally ending an affair that not only illustrated the distance between the teams but the totality of Ridley’s effort.

“I said we’ve got role players, and role players have got to come through when they’re needed,” Snyder said. “(Patterson) came through when he was needed tonight. I told him, ‘you’re going to have a tough job guarding their big guy. … If we can’t defend him, we’re going to be in trouble.’ And he did a great job.”