Parks, Greer get Delco Christian going in win over TCA 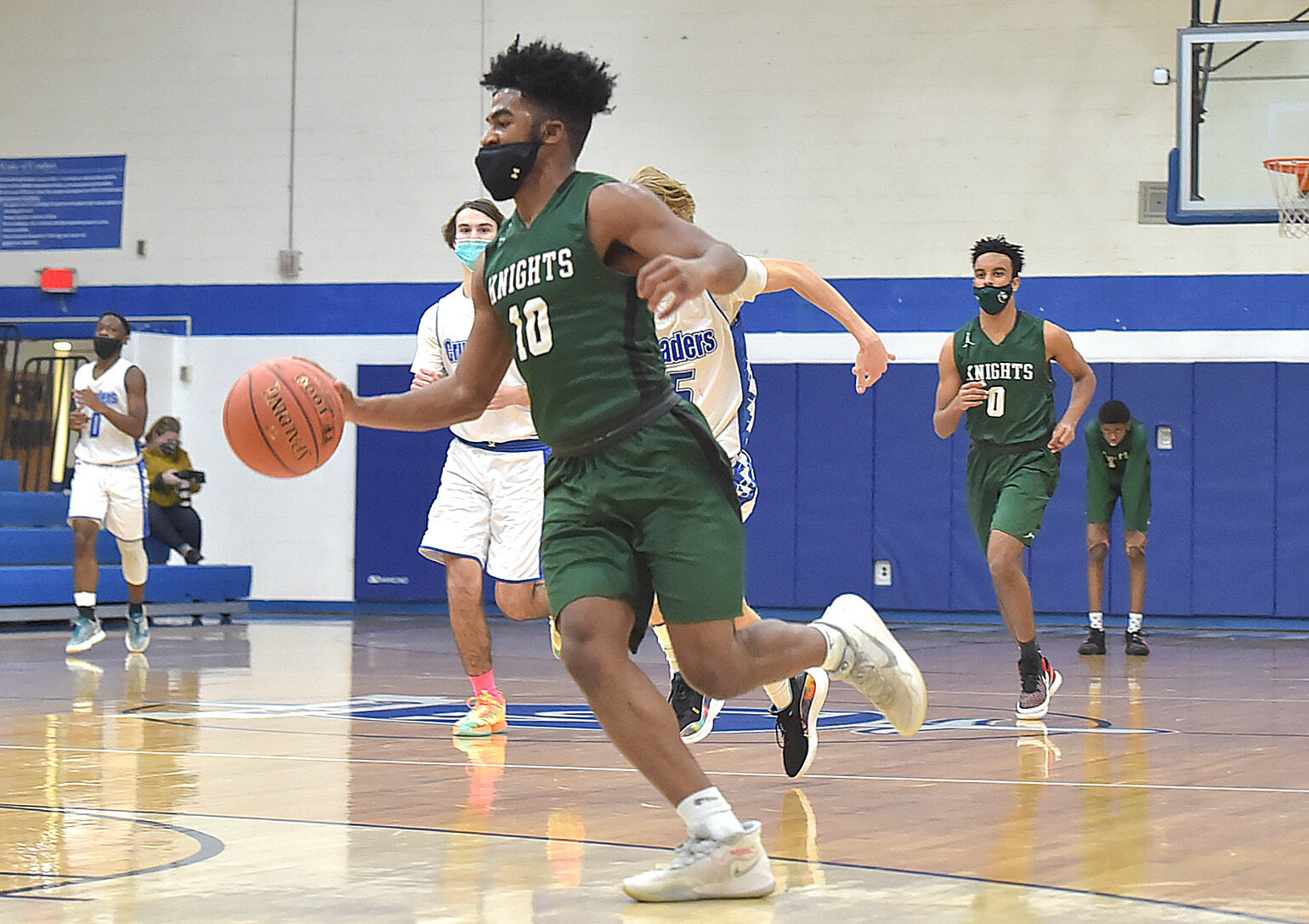 Delco Christian's Jordan Mitchell goes to the basket in the second quarter against The Christian Academy. Delco Christian won 68-56, Mitchell had 19 points in the victory. (Pete Bannan/MediaNews Group)

BROOKHAVEN — The call from the Delco Christian bench, time and again in the second half, was “whatever you want.”

Less a set play than a verbal shot of confidence from coach Reggie Parks, the instruction to his players was to read and react. To junior guards Josh Parks and Earle Greer in particular, the aim was clear: Follow your instincts, and run the floor.

Whatever they wanted was what Delco Christian got in the second half, overturning a halftime deficit at The Christian Academy on the way to a 68-56 victory over the Crusaders.

The surge was built on a 22-7 edge in the third quarter, with Parks scoring 10 points in the frame.

“It’s nice because I know he has trust in me,” Josh Parks said of Reggie, who is both coach and father. “He’s been our coach for a while. And also the trust of my teammates, because they know I’m not going to do anything stupid. It’s good to take their trust and make something out of it.”

The rally had to start on the defensive end, where TCA (2-6, 1-5 Bicentennial) got all it wanted in the first half with beautifully executed offense. But Delco Christian (6-3, 6-2) responded with a full-court, trapping press. As the Knights turned the screws, TCA coughed the ball up 18 times, the lanky arms of Parks, Greer and Jordan Mitchell constantly in passing lanes.

After getting baskets from eight players in the first half – and going into the locker room on the strength of Noelson Cherry’s buzzer-beater for a 36-31 edge – TCA committed six turnovers in the third quarter against just eight field-goal attempts, continuing a bugaboo of theirs all season. And Delco Christian pounced.

Delco Christian tied the game at 36 inside of a minute, Parks splashing home a 3-pointer. The Knights hit on six of their first eight field-goal attempts after the break. A Greer stop-and-pop from 16 feet, the second straight possession where he drained such a shot, midway through the third put DC up for good at 42-41. And the Knights capped the frame with a 9-0 run, Parks supplying seven points, including an unimpeded blow-by to the rim to cap it.

“It’s amazing to just play basketball, do whatever you’ve got to do to get the bucket,” Greer said. “… I’ve been working on that for so long, it just comes naturally.”

The first half had been a different story. TCA committed 10 first-half turnovers. But it atoned with crisp half-court execution, screening and back-cutting to open shots and a lead that stretched as large as seven points. Cherry hit all three of his first-half 3-point attempts, and the Crusaders were 5-for-12 from deep in the first half.

But they couldn’t sustain that pace.

Noelson Cherry bombs one (see what I did there?) at the buzzer.
TCA 36, Delco Christian 31 at the half pic.twitter.com/Uy4a8NWWQl

Cavacini scored 16 points to go with seven rebounds and five assists, all team-highs. Cherry added 12 points and Evan Sareyka hit three triples for nine points. From eight scorers in the first half, only four tallied after the break, though the Crusaders still managed 17 assists on 23 made baskets.

Mitchell had an outsized role in keeping DC in touch early. He scored 15 points in the opening half, doing much of his damage off his dogged determination on the boards. He finished with 19 points (on 9-for-12 shooting), nine rebounds and four steals.

“Every night, I know Jordan’s going to have the energy,” Parks said of Mitchell. “He’s one of our bigger energy and effort type of players. He’s always there, so we can rely on him until we get our shots back and build from there.”

Parks tallied 23 points, five rebounds, four assists and four steals. He was 3-for-5 from beyond the arc. Greer paired 16 points with eight rebounds and three steals. DC shot 55.6 percent (30-for-54) from the field.

When it was time for that pair to take over and assert themselves, they needed only the barest of instructions.

“It goes with the matchups,” Parks said. “I know my role. I know what I’m supposed to do.”

Germantown Academy 69, Haverford School 68 >> Jordan Longino hit two free throws with 9.6 seconds left in the second overtime to give the Patriots the lead for good. Longino led GA with 18 points.

Jameel Brown scored 11 of his game-high 29 points in the two overtimes for the Fords. Isaiah Boyd chipped in with 16 points.

Kevin McCarthy led the Churchmen with 16 points. Will Delaney added 15.

Strath Haven 75, Harriton 56 >> Luke Edwards and Matt Shuler combined to score 37 points and go 11-for-16 from the free throw line to lead the Panthers.