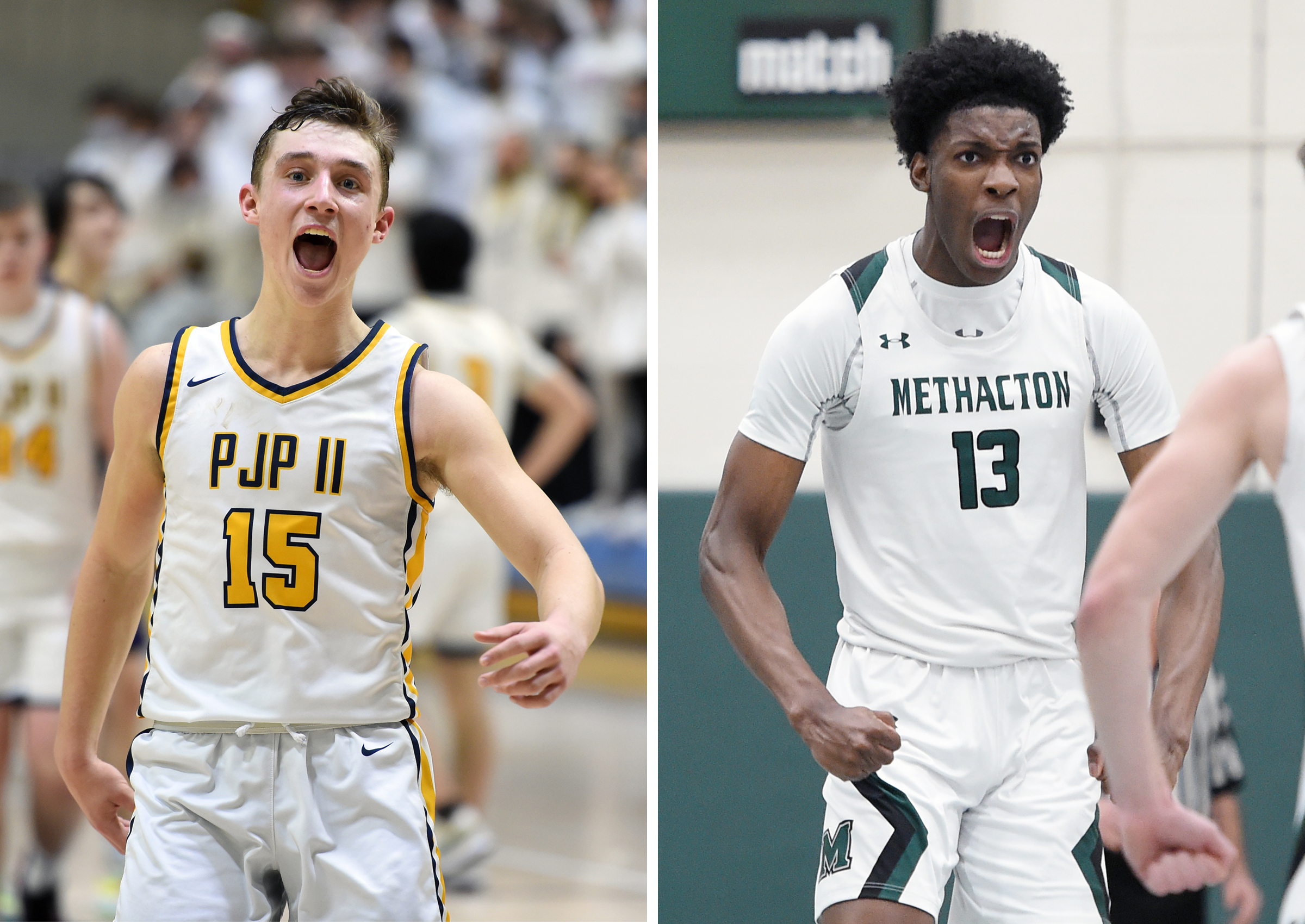 The Pioneer Athletic Conference’s most recent league winners will meet at Spring-Ford High School on Tuesday night to determine the next PAC champion.

Liberty Division winner Methacton, the winner of three straight PAC titles from 2018-20, and Frontier champ Pope John Paul II, who dethroned the Warriors last season, will play at 7 p.m. It’s a rematch of the league’s most recent championship game matchup in 2020.

Here is a look at Tuesday’s championship matchup:

Head-to-head >> Methacton defeated Pope John Paul II, 55-51, in a Jan. 20 meeting behind a 21-point night from senior Cole Hargrove. The Warriors led 31-22 at halftime before having to rally from a 36-35 deficit heading into the fourth quarter. PJP senior J.P. Baron scored 20 points in the loss.

How they got here >> The two division champions had byes in the first round of the PAC playoffs. Methacton used a six-point advantage in the third quarter to grind out a 47-42 win over Norristown in one semifinal as seniors Brett Byrne (12), Cole Hargrove (11) and Colin Meyer (11) led the way offensively. Seniors J.P. Baron (19), Jaden Workman (11) and Dylan Russ (10) all reached double figures as Pope John Paul II took down Phoenixville, 55-43, in a wire-to-wire win.

On Methacton >> With a win over West Chester Rustin on Saturday, Methacton matched the regular-season record (20-2) of its dominant 2019-20 squad that won a third straight PAC title, and the program’s first District 1 championship before continuing that run into the state tournament. This year’s Warriors have been at the top of the PAC and District 1 power rankings all season, not dropping a game until a 51-48 loss to Spring-Ford on Feb. 1. They are earning their victories in a more grind-it-out fashion as highlighted by last Friday’s semifinal win over Norristown. Methacton’s defense leads the PAC, holding opponents to just 42 points per game. Senior Cole Hargrove leads the team in scoring (15.5 ppg) and is the anchor of the defense as a dominant shot blocker. Senior guard Brett Byrne (13 ppg) is the only other Warrior who was part of the 2020 PAC champion rotation and made some big plays late in the Norristown win. Junior guard Matt Christian (9.1 ppg, 47 3s) has a 3-point make in six straight games, including two against Norristown. Senior forward Colin Meyer, who had 11 points in the semifinal win, and junior guard Cameron Chilson (7 ppg) make up the rest of the Warriors’ starting lineup as seniors Matt Blakemore, junior Jason Lagana and sophomore Anthony Daddazio also saw action in the semifinal.

On Pope John Paul II >> The Golden Panthers are the league’s reigning champions, looking to win consecutive titles for the first time in program history. Only Methacton (2018-20) has accomplished the feat in the two-plus decades since Spring-Ford won consecutive PAC titles in 1999 and 2000. Pope John Paul II boasts the league’s top offense at 56.6 points per game (Methacton ranks second at 56.1 ppg) led by the PAC’s top scorer, senior J.P. Baron (17.9 ppg, 40 3s). Baron and classmates Jaden Workman (13.2 ppg) and Kevin Green (10 ppg) were all big parts of the PAC runner-up squad in 2020 and PAC champion squad in 2021, while the other members of the Golden Panthers’ rotation are seeing big minutes on the postseason stage for the first time. Junior Trey Rogers (6.2 ppg, 30 3s) and Dylan Russ, who scored 10 in the semifinal, make up the rest of the starting lineup, while seniors Luke Sykes and Aidan O’Brien are others in the rotation.

Breakdown and Prediction >> Having the two most recent league title winners meet up in the championship game with student sections sure to provide a terrific turnout should make for a good one on Tuesday night. Both teams have experienced cores, so neither really has an advantage in that department. Hargrove (6-foot-8) provides the biggest advantage for either side as Russ (6-0) and O’Brien (6-1) lead the Golden Panthers’ front court. A few weeks ago Methacton looked ready to roll its way to a fourth league title in five years. The end of the regular season showed the Warriors’ aren’t invincible, but as Norristown found out last week, Methacton does have a different gear. PJP has the firepower and toughness to potentially knock off the Warriors, but the league’s preseason favorite should squeak another one out. … Methacton 57, Pope John Paul II 53