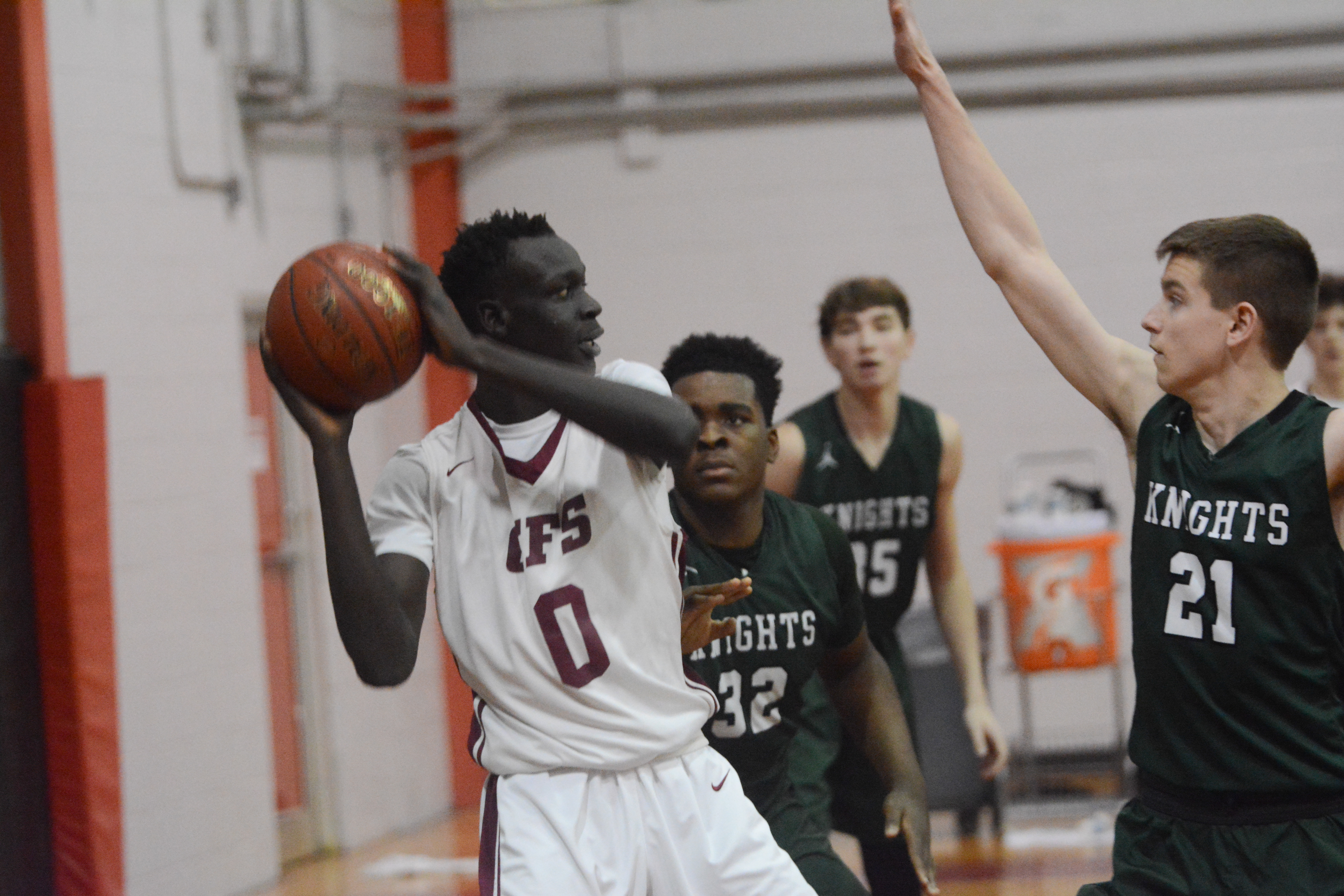 NEWTOWN SQUARE >> The conversations in the Delco Christian locker room at halftime Tuesday night weren’t overly pleasant. Not after a second quarter in which the Knights scored just six points and surrendered the final six of the half to visiting Morrisville.

But the message that emerged from the summit was well imparted.

“Effort was the main key of our success in the second half because the first half was very sloppy,” DC forward Obinna Nwobodo said. “I think that we all just needed to give effort and it had to come from someone, so I thought, why not me?”

At times in the second half, Morrisville was probably thinking, how about someone — anyone — other than Nwobodo for a change?

He scored 15 of his 16 points after the break and added 13 rebounds as the Knights dominated the boards in a 59-50 Bicentennial League win, their fourth straight victory.

Nwobodo from Piotrowski then what a buzzer beater by Flavian Perez!
After 3, Morrisville 42, Delco Christian 40. pic.twitter.com/BC1FvjbvUq

Nwobodo scored 10 points in the third quarter as Delco Christian (12-8, 8-7) made a concerted effort to pound the smaller Bulldogs in the paint. DC redoubled that pursuit in part out of necessity from a frigid shooting night from Tyler Penley and in part through foul trouble for Morrisville forward Luis Colon, who picked up his fourth midway through the third quarter and fouled out in the fourth.

The end product was a 37-22 edge on the boards. DC outscored Morrisville, 19-8, over the final eight minutes, starting the frame with a 7-0 run and ending with 10 of the game’s last 12 points.

The offense materialized thanks to spacing created by Nwobodo’s distorting effect in the post, which allowed Penley and Jackson Piotrowski ample room to create off the dribble. Six of the Knights’ seven fourth-quarter baskets were assisted on; for the day, DC dished 13 assists on 20 field goals.

Piotrowski led the way with eight assists, augmenting 16 points and eight rebounds. He hit his only 3-point attempt to put DC up for good at 45-42 with 6:50 to play. Penley tallied 10 points (albeit on 1-for-8 shooting from 3-point land) and eight rebounds, while Jacob Bronkema chipped in eight points.

Nwobodo from Piotrowski. He has 10 this quarter. DC back up 1. Late third. pic.twitter.com/VlJi6zJVZ7

The biggest contribution in the fourth came via Tylan Thornton, who’d played sparingly in the first three quarters. With deep threats sparse in the DC backcourt, Thornton scored all six of his points in the fourth, canning jumpers near the elbow on consecutive possessions to build out the lead to 53-48.

“I was looking for the bigs,” Thornton said. “And since (the defense) dropped down to the bigs, I figured just open up and if I did miss, there’s bigs there to get the rebound. It benefits the team either way.”

The game wasn’t always trending in that direction, thanks to the hot shooting of Morrisville. Six Bulldogs hit nine total 3-pointers, including five in the first half. Led by Isaiah McDavison, who distributed eight assists, the Bulldogs adapted to their height disadvantage with aplomb.

“We’re not really a shooting team, but when we’re hot, we’re hot,” McDavison said. “We were just out there playing our game, playing as a team, swinging the ball around. We were working the ball to get our shots in the offense.”

Morrisville carried a 29-24 lead into the break. It led 42-40 after three when, after Piotrowski’s crisp baseline feed found Nwobodo for a lay-in, Favian Lopez nailed a running 35-footer at the buzzer.

But the Bulldogs came up short in the same areas that Delco Christian excelled in the fourth. They committed six of their nine turnovers in the second half. And while Morrisville dished 15 assists on 19 made baskets, the height of Nwobodo and company just wore them down.

“We were getting the shots that we wanted,” McDavison said, “but it was just a matter of stopping the big guys down low.”

Isaiah McDavison a silky floater. At the half, Morrisville leads Delco Christian 29-24. pic.twitter.com/TZJelGuiz9

Nwobodo made sure that was exceedingly difficult. And for a Knights team that appears to be peaking at the right time, it has him and his teammates excited. Two home games remain this week, for the BAL playoffs, for the District 1 Class 2A tournament and perhaps beyond.

“That’s what we started doing these last couple of games, using our height,” Nwobodo said. “I think that’s why we’re on this run right now, and I’d like to go to districts and keep it going.”

Also in the Bicentennial League: