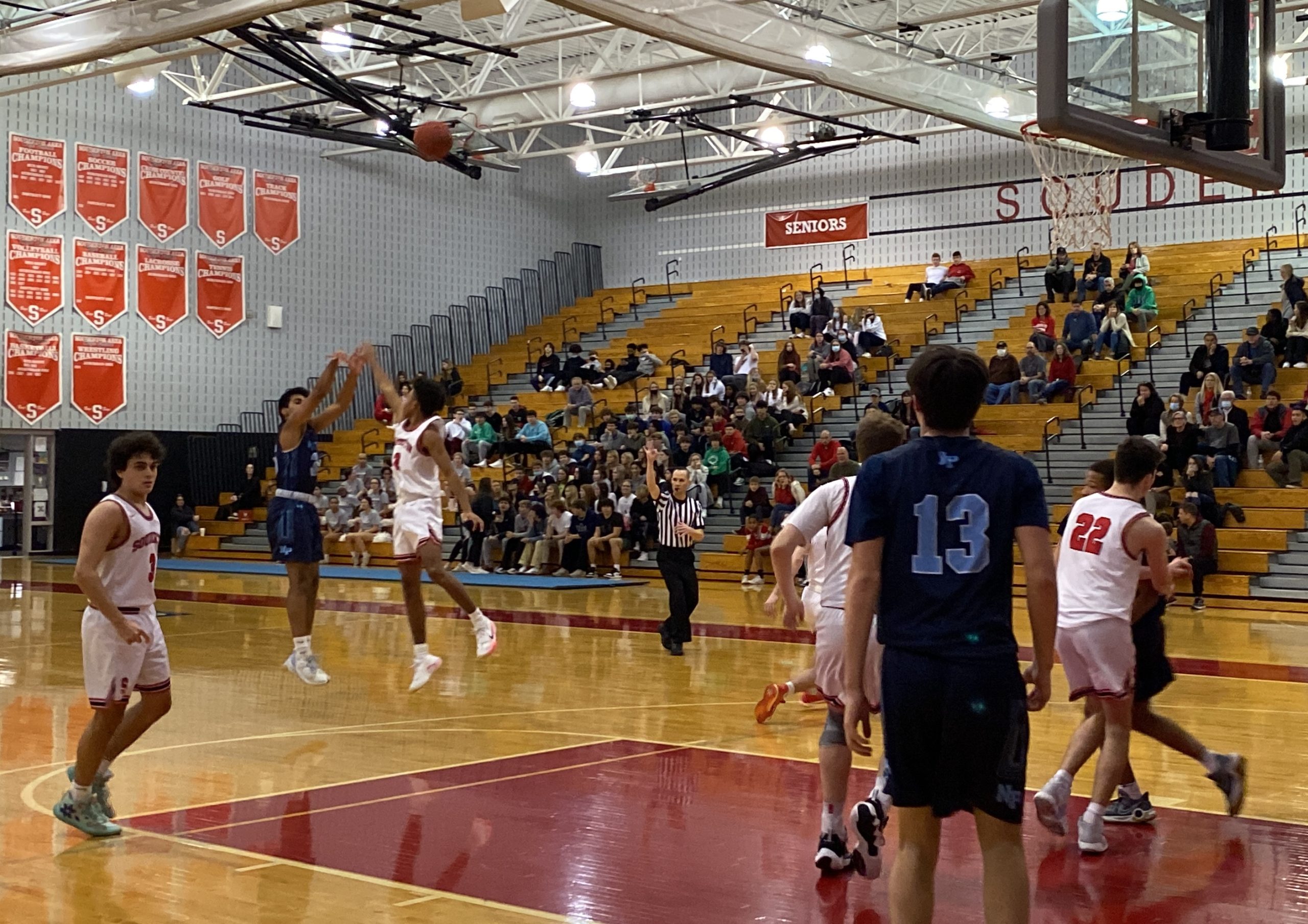 FRANCONIA >> Milind Pulugura took a pass from Joe Larkins and let off a shot from beyond the arc, the ball knocking around the rim  before dropping through for the opening three points of the third quarter.

After a first half in which not much was falling in for the North Penn boys basketball team, the senior getting some fortuitous bounces seemed like the break the Knights’ needed to get their offense going against host Souderton Friday afternoon.

“I just knew that if I kept shooting –  I was trying to just build momentum for our team,” Pulugura said. “So I did whatever I had to do.”

Pulugura followed with another three, the six points the start of an 11-0 run to begin the second half and give North Penn a 26-24 lead in the SOL Colonial Division contest.

“We know our shots would fall and we needed the spirit, the momentum to keep going,” Pulugura said. “Cause we can’t keep digging out of a hole, we needed a lead and I think the 11-0 run gave us what needed energy-wise.”

The Indians answered with a strong finish to the third to take a 39-33 advantage into the final quarter. But North Penn put together another burst, scoring the fourth’s first 10 points then pulled away by hitting from the foul line to top Souderton 59-45 and give a boost to its District 1 playoff hopes.

“We really didn’t make a tremendous amount of adjustments, I thought we played really well, we just couldn’t throw the ball in the ocean,” Knights coach John Conrad said. “But I thought we got good shots, I thought we shared the ball well and then it was a tale of two halves, in the second half things started falling.”

Aleks Smith’s hook shot in the lane had Big Red back within a point but with the Knights spreading out the Souderton defense Sgro drove down the lane for a layup and a 47-44 lead at 1:36. North Penn then sealed the win from the line – hitting 12-of-14 free throws over the last 67 seconds.

“I think just keeping the same intensity,” Pulugura said. “And we knew our shots were a little off, a little short throughout the beginning of the game and we just knew that if we stuck with the shots it would start falling.”

Down six entering the fourth, Larkins hit two foul shots at 7:31 while Sgro found Ryan Zeltt for a corner three, slicing Souderton’s lead to 39-38. Ryan Deininger put the Knights ahead for good by hitting both ends of a 1-and-1 with 6:02 left with Pulugura’s three pushing the lead to four.

Deininger was 11-of-12 from the line in adding 16 points for North Penn, which now sits 18th in the District 1-6A rankings with the top 24 teams earning spots in the tournament field. The Knights have won five of their last six, bouncing back after Tuesday’s loss to Pennridge ended their four-game win streak. NP is at Central Bucks South 7 p.m. Tuesday.

“That was really big and again that’s Joey and Mil and Terhan (Wright) our seniors, I think did a nice job to make sure we stayed the course,” Conrad.

Bonnet hit four 3-pointers in scoring a team-high 16 points while Smith added 11 points as Souderton lost its second straight. The Indians, who are 15th in the District 1-6A standings, visit Pottstown in a nonleague matchup at 6:45 p.m. Monday.

North Penn registered just two points in the first quarter, those coming on a Pulugura jumper that made it 4-2. Souderton finished  the period with an 8-0 run on back-to-back Paul Vince threes and two Bonnet free throws at 1:42 to hold a 12-2 lead.

After Levi John’s putback had the Indians up 14-6 the Knights twice cut the margin to five, the second time at 15-11 on a Wright basket inside. But North Penn could not get any close before halftime with a Bonnet trey giving Big Red a 24-15 advantage at intermission.

Pulugura, however, drained consecutive triples to pull the Knights within 24-21 early in the third. Zeltt scored the next four on a putback and a basket inside off a Deininger assist to give NP its first lead of the game at 25-24. A Pulugura free throw at 4:45 made it 26-24.

Bonnet’s jumper and a Smith basket had Souderton back ahead 28-26. The Knights knotted things twice before a Smith three-point play at 2:13 made it 34-31 Big Red. Vince’s putback extended the lead to five.

Two Deininger free throws at 1:48 had North Penn down 36-33 but Bonnet buried a 3-pointer from the left wing off a Chris Towsen assist to send Souderton into the fourth up six.