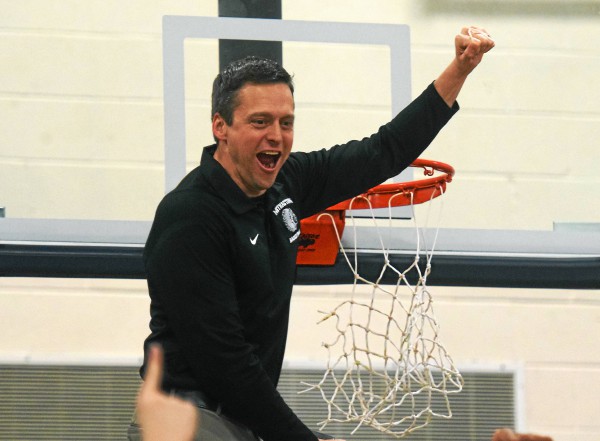 Methacton head coach Jeff Derstine raises his piece of the net during the postgame ceremony after Methacton defeated Spring-Ford in the PAC championship game at Pottstown. (Austin Hertzog/MediaNews Group)

A decade of consistency on the Methacton High School boys basketball bench is over.

After 10 years, Warriors’ head coach Jeff Derstine has announced that he is stepping down from his position in the program as he plans to devote more time to his wife and his kids, who are soon to be 11, 12 and 14.

“I want to make sure to share the appreciation I have of my wife who has supported me over the years with this,” Derstine said. “Certainly coaching has always been a passion of mine. I think everyone understands the massive time commitment that it is and everything we do in season and out of season. I’m so glad for her support of that passion and really holding down the fort with out kids. My reason for making the decision is I want to devote more time to my family … It’s been really a challenge the last couple years as they’ve gotten older and gotten involved in more things of balancing the schedule and all of those commitments.

“I loved my experience. I loved what I did. I’ve had incredible kids to coach, so it’s certainly not an easy decision to make, but it is the right time and I’m confident that it’s the right time for me and my family.”

One of the best in the business. I’m glad I got to be a part of his last season. Great coach and an even better person https://t.co/SdfdgzzV7f

Derstine who was previously the head boys basketball coach at Christopher Dock and the athletic director at Pennridge became the Methacton head coach in 2010-11 after spending a season as an assistant. He led his Warriors teams to a winning record in eight of his 10 seasons at the helm, guiding them to a combined 184 wins.

In 10 years at Methacton, Derstine led the Warriors to five Pioneer Athletic Conference championships, the first coming in 2012 and the most recent coming this past season to cap a stretch of three straight league titles — becoming the first PAC program to accomplish the feat since Pottstown in the 1990s.

Derstine was the Mercury’s All-Area Coach of the Year in 2012, 2015 and 2019. He led the Warriors to their first ever state playoff trip in 2013 and guided them back to the state playoffs three more times in 2015, 2019 and 2020, advancing to the quarterfinal round for the first time in program history.

“It’s been a really fun journey,” Derstine said. “We’ve had incredible kids who have come through and been a part of the program.”

I owe a lot to Coach Derstine and @MHS_BoysBBall. I would not be where I am today without him or this program. Thank you for everything coach!! https://t.co/Po7voCDw8X

Methacton finished with a 28-2 mark this season (the most wins in program history), won its first District 1 Class 6A championship and had hopes of advancing deep into the state postseason before having its season cancelled in the PIAA quarterfinal round.

“Any time you make a decision, you feel like while you see one class through probably the hardest part is the kids who are returning,” Derstine said. “Part of building a program, you want to help them grow during their four years and then move on from there. While it’s nice to be able to see that senior class through, one of the hardest things for me is to look in the eyes of the guys coming back and know that I’m not able to work directly with them and see them through their four years.”

Coach Derstine has been the staple for @MHS_BoysBBall since I’ve been teaching @Methacton. His tenure and resume speak for itself. Class act of a coach and person, and it’s reflective in the young men that he has worked with all these years. Those will be huge shoes to fill!

Derstine gave credit to his players for the success of the Warriors during his tenure. Brendan Casper (2013), Jeff Woodward (2019) and Erik Timko (2020) were all Mercury All-Area Player of the Year.

“That’s been such a huge piece of our success,” Derstine said. “We’ve had some incredible kids and they’ve worked hard. They’re unselfish and that’s been incredible, but from a coaching standpoint, having that assistant coaching staff has just been huge I think for our success.”

“I’m still teaching, still planning on getting out to check out some games,” Derstine said. “I’m just going to be investing a little bit more of my coaching time into youth sports at the younger levels with my kids.”