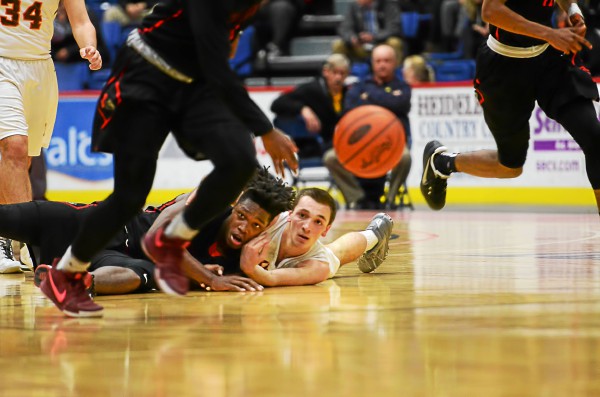 Outlook: The Bears missed the postseason for the first time in three seasons last year. Boyertown returns four starters from that squad, including Kapp at guard, who averaged 22 points and led the team in all major statistical categories. “After a solid offseason of work the team is looking to compete for a PAC playoff berth and a return to District play,” said Ludwig. “The guys have put in a lot of time individually and as a team and real improvements can be seen on the court. With four return -starters and a couple new-comers, the coaches feel this team can compete with anyone in our league.” Expect the 2017-2018 season to shake out much different for Boyertown.

Outlook: Experience won’t be on their side as the Blazers graduated 10 members of last season’s squad, including leading-scorer Ryan Okuniewski. Never an easy division to play in, Boone finds itself matched up twice apiece against traditional Berks powers Reading (PIAA-6A champ), Wilson and Governor Mifflin. Johnson comes off a solid sophomore season where he averaged just over 11 points per game. Defense will prove key for Boone’s young squad, explains Sands: “Offensively, we want to share the ball and grind down defenses until we find the exact shot we want. Defensively, we want to improve upon the 60 PPG we gave up last year and fully understand that the amount of success we have this year will be a direct result of our defensive performance.”

The Hill School’s Chase Audige (15) dribbles past Taft’s Moses Polking in transition in the first round of the Mercer Invitational Tournament. (Austin Hertzog – Digital First Media)

Outlook: The Blues graduated eight seniors from last year’s team that made a deep run into the PA Independent Schools Athletic Association (PAISAA) playoffs last season. Hardly a worry, though, as they return leading scorer Audige (William & Mary commit) and Morris, along with a pair of new faces in post-grads Alikakos and Maxwell, who along with Mayo should be a presence in the paint. “We have a very talented group that could go deep into the post-season if we are able to stay healthy and build chemistry throughout the year,” said Canosa, stepping in for Seth Eilberg who is on sabbatical. “A very competitive non-league schedule should help prepare us for a strong MAPL that has improved from top to bottom.”

Outlook: The Warriors could have their work cut out for them this winter as their varsity roster boasts just two seniors in the wake of the departure of eight seniors from last year’s program. Sophomore center Jeff Woodward logged quality time last season and provides promise in the paint simply based on his height while Duda looks to build off a strong sophomore campaign. “The trio of David Duda, Jeff Woodward, and Noah Kitaw gained valuable experience last season and look to provide strong leadership this season,” said Derstine. “As always, we expect the PAC to be very tough and we look forward to challenge of a competing against strong competition all season long.”

Outlook: For the first time in quite a while, things are trending upward in Bucktown this winter. The Wildcats return a team stacked with seasoned vets headed by All-Area Honorable Mention Stuart. That said, Kirby was quick to note that OJR will have plenty of challenges ahead. “Our schedule is very difficult, as we will play 17 games against playoff teams from last year, including eight games against teams that played in the state tournament. And I think that the PAC will be as deep as ever. If we can work hard at the defensive end, hopefully we will be playing meaningful games in February.”

Outlook: The Panthers picked up a win in the opening round of the PAISAA playoffs — their first since the 2014 season. Now, they’ll look to take it a step further. Guadarrama spent his summer playing with the U19 Puerto Rican National Team, and is back for his senior season along with Brooks and James, both of whom are threats to score all over the court.

Outlook: The Vikings set the bar in 2017 — earning the program’s first PAC title since 2013 and eventually winning their first state playoff game since 1972. How will this year’s crop of players back it up? With a little depth of course. Light and Strechay logged quality minutes during PV’s state playoff run last season, led by Justin Jaworski (Lafayette), Sean Owens, Hogan Millheim and Axel Lopez, all lost to graduation. “Graduating three starters would be a large deficit to overcome,” said Poysden. “However in both the junior and freshman class there is a considerable depth of talent. Senior leadership in (Kevin) Bernabe, Graves and Light as well as the experience gained last year by Strechay will be an integral part of our success.”

Outlook: The Phantoms graduated seven seniors from last year’s team, but appear to have plenty of reinforcements at the ready. Jenkins and Brown logged meaningful minutes last season as Phoenixville was just narrowly edged out by Upper Merion for the Frontier Division’s No. 2 seed. “Although we don’t have a ton of returning playing experience, we believe we have what it takes to compete in the league on a nightly basis,” said Burnett.

Outlook: Rafferty took his lumps in his first season with the Golden Panthers, who finished winless in the conference and ended the season on an eight-game losing streak. This year’s team lists all seniors — dealing only with the departure of Fran Interrante. “We are competing every day to win the day,” said Rafferty. “Whether it is in practice or a game, our sole focus is to win the day. We know the league will not be easy because of the great coaching and talented teams that the PAC has.”

Outlook: The Falcons just missed a berth in the PAC’s Final Five playoff with a season-ending loss to Upper Merion in a game that would have forced a three-way tie at the top of the Frontier Division. Now the team looks to bounce back following the graduation of six senior contributors including Nik Curnew (13.8 ppg). Salata logged steady minutes as a junior last season and finished with just under eight points per game. “We are committed every day to learn how to work hard together, work smart together, and play together,” said Flanagan. “The PAC is shaping up to be competitive every night … every team will battle for one of the coveted spots in postseason play.”

Outlook: Challenges will await the Trojans as the team’s two leading scorers from last season — Larry Wingo (Reading) transferred away from Pottstown. Dashiell led the team in 3-pointers made (23) last season and Brown proved to be a plenty reliable scorer. The offense should play through the pair during the season.

Outlook: Talley will put a lot of weight on the shoulders of his upper-classmen this season, namely three-year starter Diaz as well as Hokanson and Baker as the Rams will look to rebound from last year’s loss in the PAC championship. Hokanson provides a presence in the paint while Diaz is a scoring threat both from the outside as well as through traffic. Step one will be getting the newcomers up to speed. “The challenge every year is getting the incoming sophomores and JV players acclimated to the speed of the game,” said Talley. “Our goal is to compete for a league championship and qualify for postseason play.”

Outlook: Last year was a pleasant surprise as the Vikings strung together a bunch of upsets all the way into the District 1-5A championship game and to the second round of states. The bad news, though? Upper Merion doesn’t return a single varsity minute from that team’s roster. “This crew is composed of a young nucleus but there are some talented, hard working, senior leaders that will allow this team to compete on a night in/night out basis,” Quenzer said. “The more game experience that these guys get, the more they will grow up and gel.”

Upper Perkiomen’s Ryan Kendra drives past Pottsgrove’s Steve Hein before dishing it off to Will Walker in the post for the bucket.

Outlook: My, how things can change in the span of a season. Last year, the Tribe entered the season in the midst of a 72-game losing skid within the PAC. Now, they’re poised to do some serious damage in the conference. Upper Perk returns six seniors, including Kendra, a First Team All-Conference selection from last season who is just 63 away from joining the 1,000-point club. Liam Boyle (12 ppg) and Walker (nine ppg) are looking to build off strong junior seasons where they each earned postseason accolades. “Our chemistry, athleticism, and dedication to defense will be integral to our success this season,” said Krupp. “Our goal, as it has always been, is to compete and improve on a daily basis. With this mindset in place, we feel that we possess the talent, work ethic and determination to make a run in both the conference and district playoffs.”