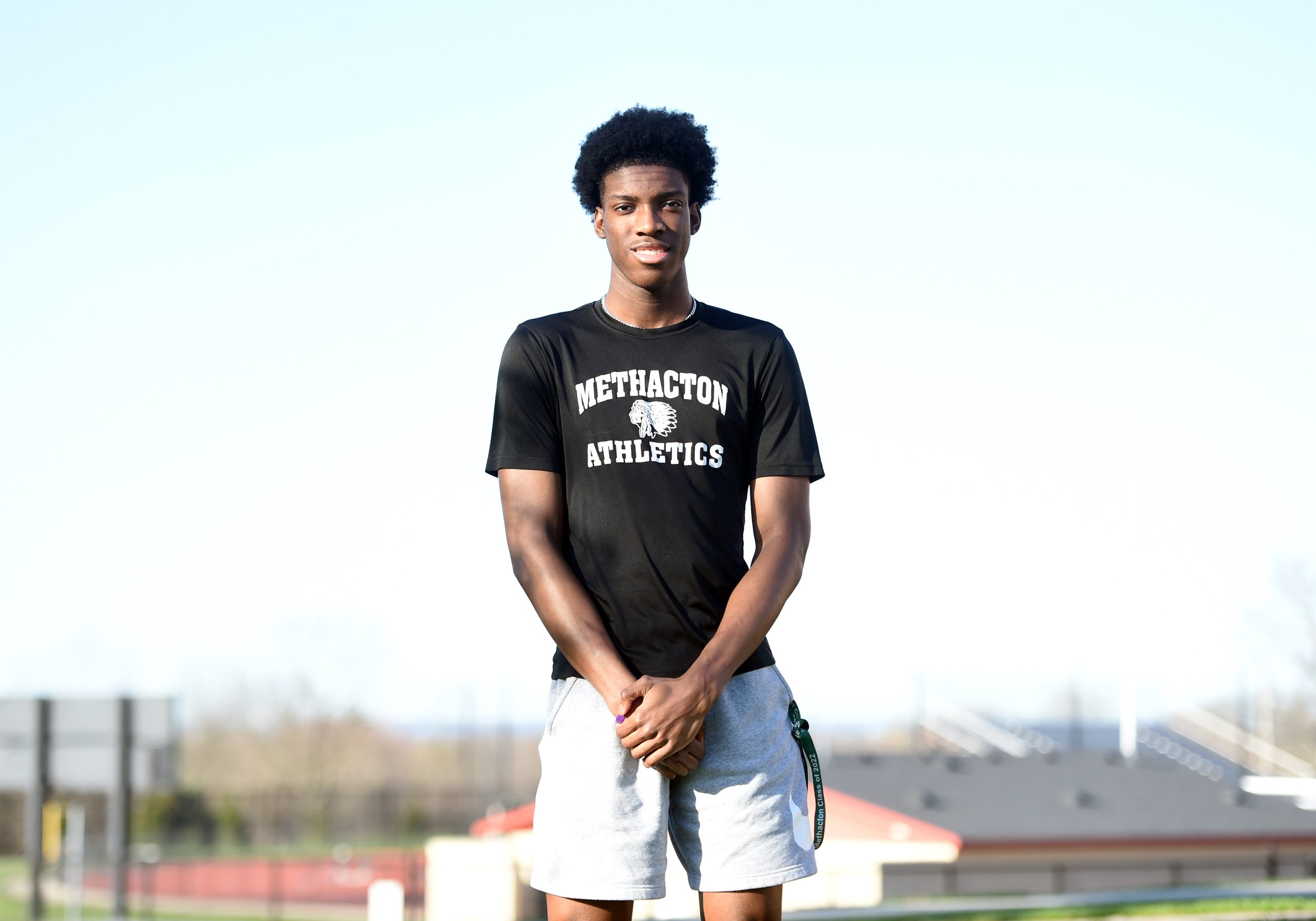 As the Methacton boys basketball program rolled to a District 1 championship in 2019-20 behind Colgate-bound big man Jeff Woodward, the star of the next great Warriors’ basketball squad was developing in practice on a daily basis.

Then a 6-foot-6 sophomore, Cole Hargrove came off the bench to help the Warriors in their banner season, but he also matched up with the 6-foot-10 Woodward each day in practice in what was an eye-opening experience for someone used to always being the biggest player on the floor.

“It definitely was a mindset change just knowing that there’s going to be guys bigger than me, not just from a height standpoint,” Hargrove said. ‘That really propelled me to just start working out, going to the gym and get bigger. … He was really pushing me around. He was still pretty dominant, but (by the end of the season) I would say I was way better than at the start trying to guard him.”

Though Woodward held the upperhand, it wasn’t hard to identify that Hargrove could be similarly dominant some day.

Hargrove, now listed at 6-foot-8, rarely matched up with anyone over the past two seasons who could match up with him physically. It just took a little while for him to figure that out. But once he did, the Methacton boys basketball program had a dominant frontcourt player terrorizing opponents on both ends in the paint once again.

This past season as a senior, Hargrove helped his team win a Pioneer Athletic Conference championship, reach the District 1-6A semifinals for the second time in program history and get back to the PIAA postseason after a one-year hiatus, playing the starring role in his team’s biggest victories of the year.

“The biggest thing with Cole was his confidence level quite honestly. It was exciting to see him really grow and get confidence in his abilities,” Methacton coach Pat Lockard said. “We kept telling him that he needed to be the best player on the floor because he is the best player on the floor in most of our matchups. When he bought into that and the team bought into that, you could really see the success that we were having really grow into that.”

It’s not an easy thing to do following greatness.

Hargrove had the task doubled as he followed in the footsteps of quite possibly the best player to ever come through the program in addition to the best Methacton team of all-time.

He and classmate Brett Byrne were tasked with upholding the level of the program when they suddenly went from role players on a District 1 championship team as sophomores to the go-to guys as juniors the next season.

There was a learning curve, and though the Warriors put together a solid campaign in 2020-21, advancing to the District 1-6A second round, it didn’t reach the bar previously set. They were waiting on their big man with big potential to figure out his fit.

“I feel like I really found that click in the middle of my junior year,” Hargrove said. “I was pretty passive at the start of the season. I wasn’t really that leader that I thought I’d be. I really had to step it up and be more vocal. Even though I wasn’t a captain, I still felt I was a leader on that team and I was pretty disappointed in myself, but I picked it up.”

“I was physically prepared for it practicing against Woodward my sophomore year, but it was mainly more just an X and Os type of change,” he added.

A 20-point, 20-rebound performance in a District 1 playoff victory in the second-to-last game of his junior season, displayed that ‘click’ and showed a glimpse of the kind of dominance in store for his senior season.

“I always told him there’s a monster in there that we need,” Lockard said. “You’d see flashes of it. Last year in our first district game, when he had the 20-20 game, I said, ‘Cole you pretty much have the ability to do that every game we play.’ He’s an unselfish person. He’ll set that flare screen, he’ll swing the ball for the extra pass and our team needed him to be selfish and that was a little out of character for him, but he was determined to do what the team needed. Once I kind of convinced him, showed him, he bought in.”

Hargrove averaged a double-double with 15.6 points and 11.2 rebounds per game this season and also set a program record with 90 blocks.

His play became louder throwing down emphatic dunks and blocks, but so was his voice in guiding the Warriors — something a little out of character for the sometimes soft spoken Hargrove.

Hargrove led the Warriors to a 19-0 start, a fourth PAC championship in five seasons, the program’s second-ever District 1 semifinal trip and PIAA berth — all accomplishments that would have been eye-brow raising if not for the historic accomplishments of two seasons ago.

“We just had to figure out who we were as a team after that, just try to find our identity on the court,” Hargrove said. “I feel like we were on a roll … and really made a stamp at what this brand of basketball is in future seasons.”

That brand of basketball Hargrove spoke of us was a gritty, grind-out style that intimated opponents on the defensive end. By the end of the first quarter, Hargrove usually had at least one blocked shot to dismay opponents from coming into the lane for the remainder of the contest.

Hargrove’s defensive ability goes beyond his physical gifts. Lockard recalls watching film of him as a sophomore naturally making switches and reads. At the back of the Warriors’ zone this season he barked out orders to his teammates as he surveyed the floor.

“People kind of overlook defense as just steals and blocks, but it’s basically just making the right read and knowing where to put your body to make the right play,” Hargrove said.

Of course Hargrove also gave opponents fits on the offensive end of the floor defenses sending two or even three payers to try to sop at him at times. He finished second in the PAC in scoring (behind only Pope John Paul II’s J.P. Baron), while shooting a remarkable 71.6 percent from the floor, including 78.4 percent on his two-point attempts.

His impact on both ends was felt significantly in the team’s biggest wins of the season.

There was a 22-point effort in the league championship game as the Warriors dethroned PJP to reclaim their spot atop the league. An emphatic block followed by seven consecutive points from Hargrove changed the game and triggered the Warriors’ 55-42 win.

He paired a dominant defensive effort with multiple highlight blocks and 15 points helping turn a close contest into a rout in the District 1 opener against Penn Wood.

In the following round, Hargrove put the Warriors on his back scoring 10 of his team’s 14 fourth quarter and overtime points to stave off a potential upset by Garnet Valley and send the Warriors to their second-ever District 1-6A semifinal.

The Garnet Valley win was one Hargrove was especially proud of.

“I really just kind of had to be a leader in that part to win that game for us in districts,” Hargrove said.

The season ended with three losses. In their fourth matchup against Methacton on the season, Norristown finally figured out how to slow Hargrove on the offensive end and pull him away from the paint on defense.

Despite respective 20- and 18-point games from Hargrove the Warriors finished off a terrific season with a loss to Cheltenham in the District 1 third place game and a loss to Northampton in the opening round of states.

The finish did not diminish the accomplishments of Hargrove or his teammates, particularly with some of the adversity they faced over the past two seasons.

Hargrove’s best is still to come. Drexel, UMBC and Delaware State are among the colleges he is communicating with, and he is still playing AAU this spring to boost his profile while he considers his options. He recently stood out during an event in Indianapolis, which his father said sparked interest from a few more schools.

He has the physical traits to hang down low at the next level, a capable shooting stroke (29.7 3-point percentage, 67.4 free-throw percentage) and an unteachable IQ and unselfishness that will make him easy to fit in wherever he ends up.

Maybe he’ll run into Woodward again at the next level and get some revenge for some of those practice battles two years ago.

“To see him grow into that confidence and physically grow into the size that he was and then mentally and emotionally see him grow to where he’s at right now, it’s been something that’s very special that I definitely did not take for granted,” Lockard said. “When college coaches call me to ask about Cole, I always tell them it’s easy for me to do that. His versatility, his attitude, his grades, there’s nothing more that I would want out of a player.”