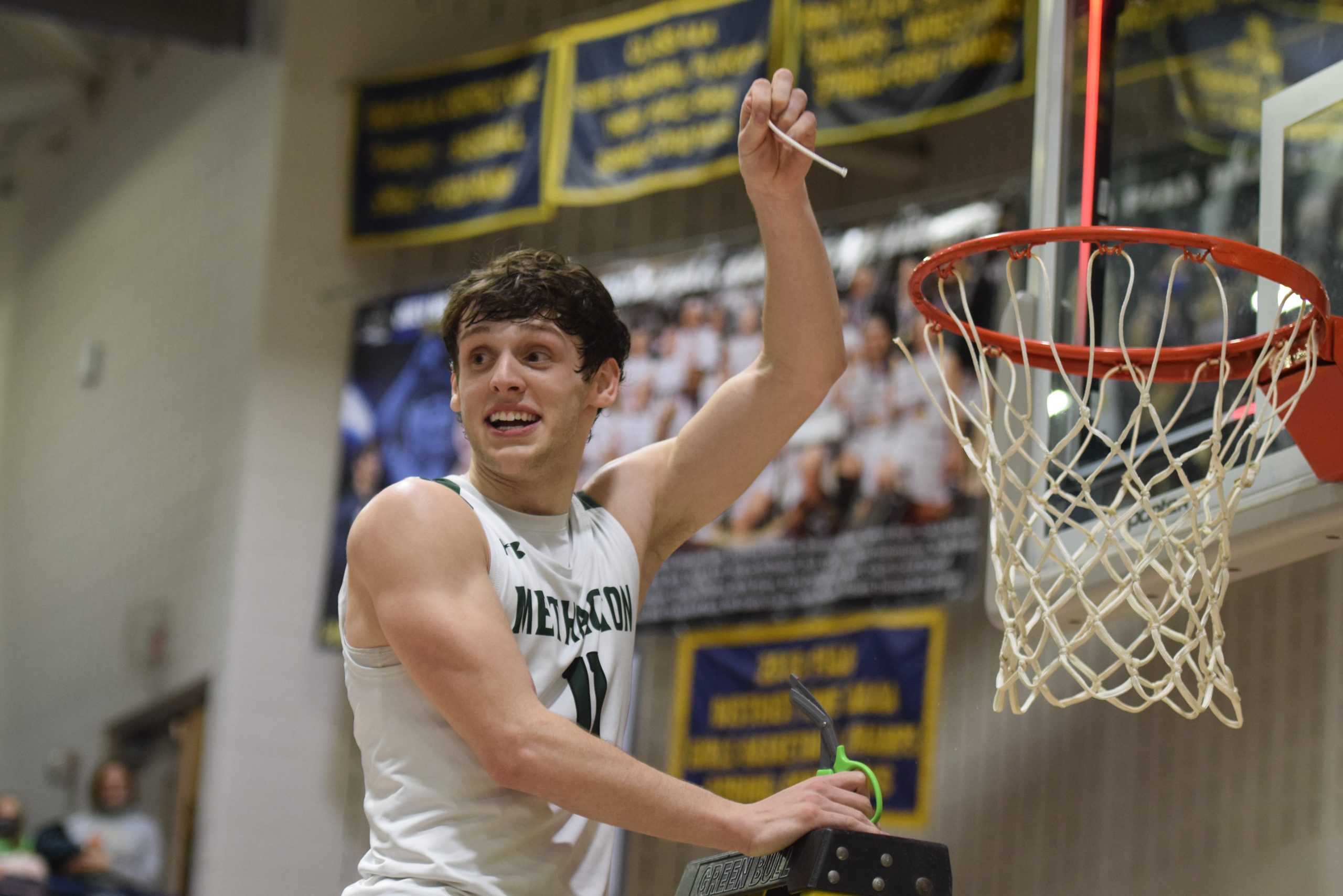 ROYERSFORD >> The Class of 2020 raised the bar for the Methacton High School boys basketball program.

Followed by the departure of longtime coach Jeff Derstine and four spectacular seniors, it was a level that appeared mighty difficult to reach again.

Two years later, the Warriors are atop the area’s basketball landscape once again, claiming a fourth Pioneer Athletic Conference championship in five seasons with a 55-42 win over Pope John Paul II in Tuesday’s league championship game at Spring-Ford.

“It was exciting,” Warriors’ second-year coach Lockard said. “I was looking forward to the opportunity. I know Coach Derstine did a great job laying the foundation for all of the character stuff, the good team building stuff, the intangible stuff.

“From a transition standpoint, I didn’t have to do a whole ton of work from there. It was more the Xs and Os, and the kids are great. It was really easy to coach them and ask them to do things that we want them to do. I was looking forward to the opportunity, and I was happy for these kids. They earned it tonight.”

Lockard had two holdovers from that 2020 group in guard Brett Byrne and forward Cole Hargrove to help the program reset.

Both watched mostly their freshmen seasons when the program won a PAC title in 2019. They became the two main role players as sophomores on a team that went 28-2, won a third straight PAC title and the program’s first-ever District 1 crown.

“Obviously there’s pressure because they set the bar high,” Byrne said of the 2020 group. “They were such great players and everything. Me and (Cole), we had to fill a void.” Hargrove and Byrne helped lead the team to an 11-7 season in Lockard’s first year, when they finished second in the Liberty Division and tied for fourth overall in the PAC to break a string of three straight league titles.

They returned as seniors hoping to get back to the heights of their freshmen and sophomore seasons.

“We talked about being leaders our sophomore year and having our class of 2020 leave with Jeff (Woodward) and Brett (Eberly) and them,” Hargrove said. “We took a thought and said, ‘Hey, we need to be leaders in years to come to be able to win the PAC.’”

The Warriors leaned on their veterans in Tuesday’s win as Hargrove scored 22 and Byrne had 18. The two combined for 14 of the team’s 19 points in the fourth quarter to help Methacton pull away.

“It’s definitely a special one because we never got to experience a PAC atmosphere with us being the guys,” Byrne said. “It’s amazing with us as captains in a new role that we were able to come out on top again.”

“It feels good playing in this program and playing every role from playing on JV to playing a rotational guy to being a starter and a leader,” Hargrove said. “It really feels good to win PACs as a senior.”

Lockard’s program has also churned out players like seniors Colin Meyer and Matt Blakemore and juniors Matt Christian and Cam Chilson to complement Hargrove and Byrne.

The group also waited their turn to pitch in on a title team like the ones they watched as young players in the program.

“We were prepared to go and do it and be ready to follow their steps,” senior Colin Meyer said. “There’s obviously pressure, but we knew how to do it and we completed it. We won the PAC this year.” Methacton went 20-2 in the regular season, matching the same record the 2020 group brought into the postseason. With another league championship under their belt, the Warriors also enter the District 1 Class 6A tournament as the No. 1 overall seed.

“I call it my own, but it’s my coaching staff’s, the players, the whole nine yards, the administrations’s great,” Lockard said. “It’s tough to describe the feeling, but it’s pure happiness right now.”

Byrne saw the floor in all three of the Warriors’ championship wins over his four seasons, dribbling out the clock in a blowout win his freshmen year.

He appreciated the unique opportunity he’s had and the level of success he helped maintain in a program that now has six league titles in the last decade.

“Not many people can say they’ve been a part of three PAC championships,” Byrne said. “I’m lucky to be a part of a program where the winning bar is expected and everybody gets what they want in the end basically.”