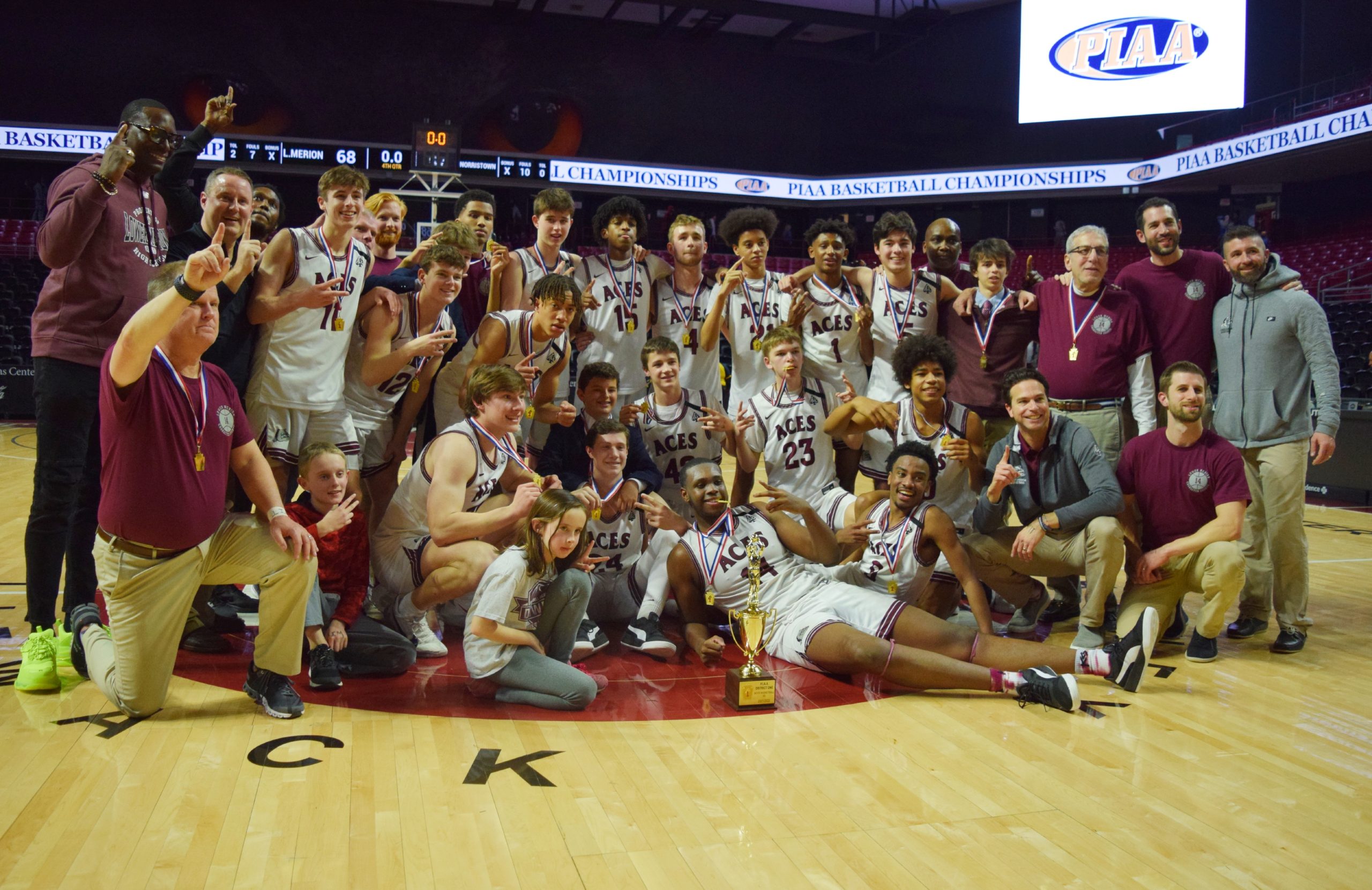 The Lower Merion boys basketball team poses with the District 1-6A championship trophy after winning the title over Norristown on March 5 at Temple University. (Austin Hertzog - MediaNews Group)

PHILADELPHIA >> Demetrius Lilley earned this one.

The Lower Merion senior had earned the dunk he threw down, and to be fair, the second one too, as the capstone on Saturday’s District 1 6A championship. He had earned it because he and the rest of his Aces teammates had earned it while taking the full broadside of every bit of heart, grit and fight Norristown had put on them on the court at Temple’s Liacouras Center.

When it most needed it, Lower Merion’s poise prevailed as the No. 2 Aces topped the No. 12 Eagles 68-57 to win their second straight district title. For a quarter, it didn’t look like it would be much of a game. Behind Lilley, the Aces put the throttle down off the starting line and had a 17-2 lead before it felt like anyone on the Norristown side even had time to blink. When that extended to a 23-6 lead off a Lilley stick-back to open the second quarter, it could have been the bell on the Eagles’ dream postseason run.

Could have been, but wasn’t.

All season, Norristown has fought and Saturday would be no different. It wasn’t going to come all at once, but put together a senior-laden team of prideful players like DJ Johnson, Righteous Mitchell, John Dinolfi and the rest, and they’ll take what they can get as they get it.

“We showed we shouldn’t have been the underdogs in the first place,” Eagles senior Zaki Gomez said. “We proved it when we came back, we belonged on this court too.”

Norristown closed the second quarter very strong, getting an and-one from senior Nasir Williams and three foul shots from Mitchell, who drew contact on an end-of-half heave, to make it 32-25 at break. It wasn’t a total turnaround from the rough start but things were trending up for the Eagles. Norristown’s DJ Johnson gestures after his 3-pointer that got the Eagles within a point of Lower Merion during the District 1-6A championship game on March 5 at Temple University. (Austin Hertzog – MediaNews Group)

For Lower Merion’s Sam Wright, it wasn’t unexpected but the guard felt his team also let up just enough to give Norristown some life. On a night where poise prevailed, it was 12 points from Wright, all in key moments, that helped get the Aces to the finish line.

“We knew they were a really tough team that’s come back from a lot of battles,” Wright said of the Eagles. “I was trying to know what we were doing on the court and communicate it to the rest of the team, make the right pass and take care of the ball. There was a lot of pressure tonight, so I wanted to do what I could to help calm the team down.”

There was no calming down Norristown in the third quarter. A putback by Johnson and a three by Dinolfi had cut the once imposing lead down to a point with 4:18 left in the frame at the end of a half-opening 9-3 run before a 3-pointer by Wright stemmed the bleeding temporarily.

Finally, with 2:44 left in the third, DJ Johnson connected on a three and leveled the score 39-39.

Norristown coach Dana “Binky” Johnson felt his team was a little reluctant to take shots early in the game and once his guys got past that, they came to life. There wasn’t much hesitation from Norristown in the second or third quarters, but there was a toll.

“Sometimes, you just need to see the ball go through the bucket,” Binky Johnson said. “Once we saw that, honestly, it was a relief and really got things going.” Lower Merion’s Demetrius Lilley hangs on the rim after a dunk in the late stages of the Aces’ District 1-6A championship win over Norristown. (Austin Hertzog – MediaNews Group) Getting all the way back into the game took a lot of energy and Lower Merion again got a poised play right after DJ Johnson’s tying shot when Josh Poles scored on a drive to put the Aces right back in front. LM got a defensive stop then Lilley, who had hurt the Eagles early on the glass, did so again with a putback and-one that made it a two possession game again.

Poles bagged another bucket to end the quarter, keeping LM in front 45-41.

“We had the right energy today, we just needed to play smart,” Wright said. “I think the energy was there. We needed to share the ball, make the right play and I think all of us did that well today.”

Binky Johnson acknowledged the comeback did ask a lot of his players, but countered with the fact Norristown has been an energetic team all year. Instead, he lamented the two late possessions in the third quarter after tying the game where his team didn’t get anything while Lower Merion was able to turn the stops into makes.

There was a definite dejected feeling from the Norristown players as they left the Liacouras Center on Saturday but as Gomez noted, they still have a state run to look forward to.

“We’re going to stick to what we do at Norristown,” Gomez said. “We’ll regroup, focus on what we do here and get back after it. It’s not deflating when you look back on it, I think it shows we have a good group of kids here and we can really do something.”

There wasn’t a need for a rallying speech from the coaches either. It was just a night that hadn’t gone their way. Lower Merion still had to win said basketball game because Norristown was not going away in the fourth quarter. Even when they lost DJ Johnson to a foul out with 5:42 remaining, the Eagles kept clawing with Mitchell scoring eight points in the frame including a deep three that cut the lead to 59-54 with 2:20 left.

Lilley, who had been held relatively quiet offensively in the second half, knew it was time to answer. Wright found his teammate out past the arc in the right corner and Lilley buried the look, giving the Aces a last surge toward the finish.

“We know as the veterans on the team, we have to be the ones to keep our composure,” Lilley, a senior, said. “We’ve been here before, we’ve been in this moment. Every chance we got, we brought everybody into the huddle and just said ‘relax, we’re good.’ We didn’t need to panic, we knew we could pull out the win if we stayed calm.”

Lilley dunked twice, the second a one-hander on the break and unlike last year, when the Aces hoisted a trophy in front of a limited crowd, the big guy got the chance to walk it over to a crammed student section.

“It felt amazing celebrating on the big stage at Temple,” Lilley said. “I’m very grateful we got the chance to play in front of everybody and share this with everyone who came out to see us.”