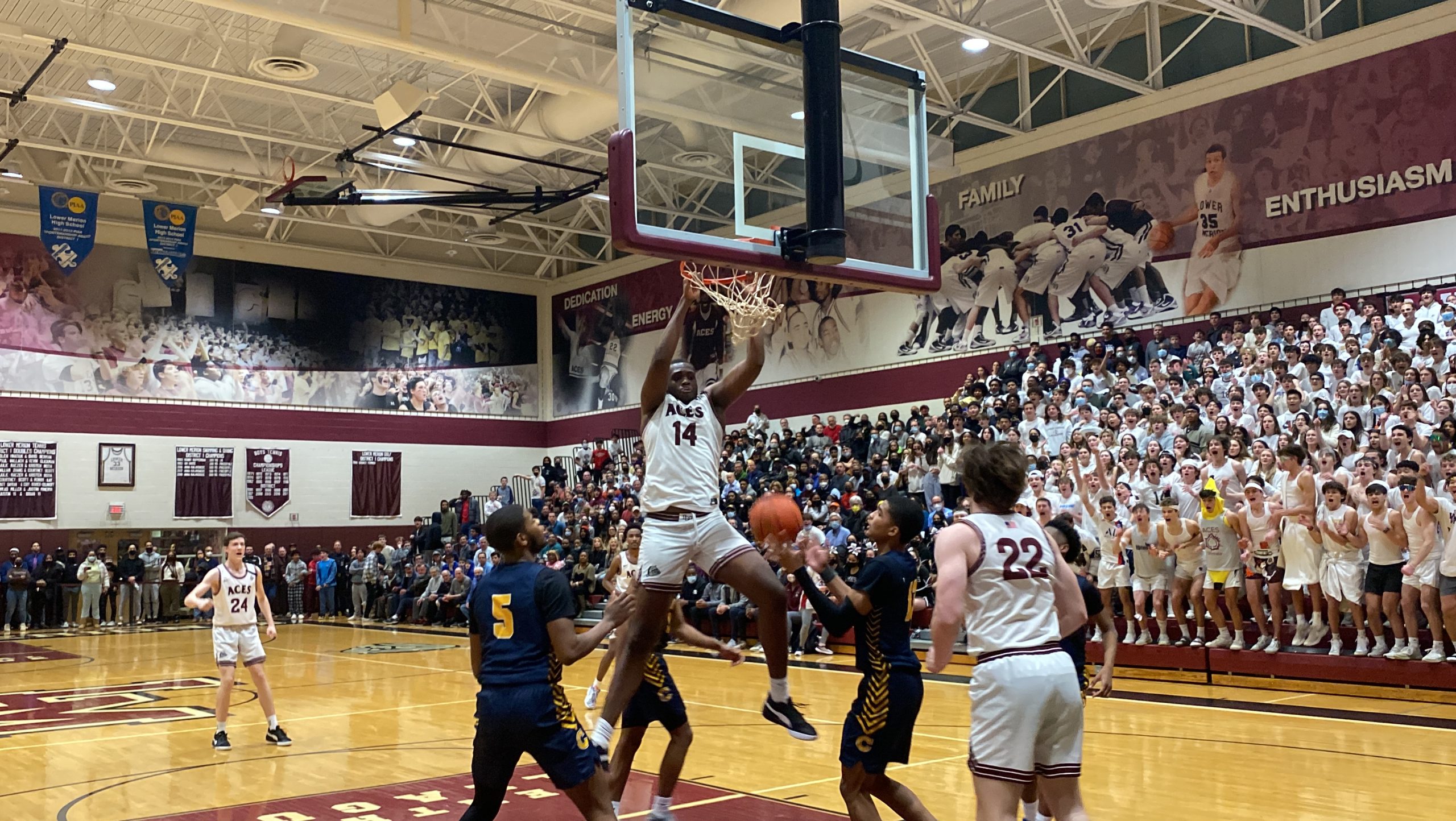 Bensalem >> When the District 1 6A champion Lower Merion boys’ basketball team faced Abington in the second round of the PIAA 6A state tournament Sunday, it presented a unique challenge.

Last month, the Aces beat Abington by 32 points in the District 1 6A tournament, and last year, Lower Merion defeated the Ghosts by 21 points in the district championship final. Going for a third win against Abington in one year posed a tough challenge of sorts, according to Aces head coach Gregg Downer.

“I think the psychological oddness of really having to beat this team three times was a little bit difficult,” said Downer. “I’ve seen it in my career where you’re trying to beat a team for a third time, and that team is kind of playing on house money, so I was concerned about that. There’s an ebb and flow to basketball, and those guys came out fired up, and it was a four-point game [25-21, Aces] at halftime. We just kept our composure and made enough plays to get the victory.”

In the second half, Lower Merion gradually pulled away for a 63-50 victory and advances to the state quarterfinal, where they will face District 2 champion Scranton Wednesday.

Lower Merion’s 6-foot-9 senior standout, Demetrius Lilley, who led all scorers with 18 points, said, “The first half was pretty close but the key for us in the second half was keeping our composure, taking our time with the ball, playing great defense and being physical.”

Abington got off to a good start Sunday, taking an early 7-3 lead. But a couple of treys by Aces junior guard Sam Brown, one from the left side and the other from the right corner, gave Lower Merion an 11-9 lead. The Aces led the rest of the way, and Brown finished with four treys (and 15 points).

“With Abington’s game plan, they were willing to give up some open threes when they were triple-teaming Demetrius [Lilley], as they should,” said a smiling Brown. “I kind of reaped the benefit of Demetrius being as good as he is.”

Just before the half ended, Abington’s Kahjel Morris connected on a three from the right side to cut the Aces’ lead to 25-21 heading into the locker room at halftime. Early in the third quarter, the Ghosts crept to within three points (27-24) when sophomore guard Jeremiah Lee nailed a three-pointer.

Brown said, “We knew that their No. 15 [Derrius Lucas] was a heck of a player, and when we defended against him, we got nailed on some open three-balls from some of their other players – Abington did a good job staying in the game.”

Midway through the third quarter, Lower Merion held a slim 33-29 lead and went on a 7-0 run. Brown hit a trey from the left side; then following an Abington miss from the outside, Lilley scored underneath in heavy traffic; then Brown intercepted a Ghost pass and senior guard Jayden Shippen drove in for a layup to make it 40-29.

Abington head coach Charles Grasty said, “In the third quarter, we missed some rotations, and Lower Merion is a good shooting team. The big kid [Lilley] got loose and converted a few times, and we missed some tough shots.”

By the end of the third quarter, Lower Merion had held Lucas to only two points.

Downer said, “I thought we played good defense on their best player, No. 15 [Lucas] and I thought the decision to go to full-court man defense  and get after them a little bit was to our liking. And we made some threes (smiles).”

Lower Merion went on another 7-0 run early in the fourth quarter to build on a 43-36 lead. Lilley scored twice underneath, both times getting pinpoint passes from Justin Poles, then Brown hit a trey from the right corner to make it 50-36, Aces.

In the fourth quarter, the Lower Merion trio of Brown, Poles and junior guard Sam Wright went 11-for-14 from the free throw line. Wright finished with 12 points.

“I thought Sam Wright had a good all-around game today – good defense, good foul shooting, made a couple of threes,” said Downer. “I thought Henry Bard played really good defense – he does a lot of the intangibles for us.”

Abington, who finished eighth in the District 1 6A tournament, ended its season with a 17-12 record.

Grasty was asked what he thought was the difference between Sunday’s relatively close contest and Abington’s two earlier meetings with the Aces.

“Confidence,” replied Grasty. “Our kids trusted the hard work that they put in. Lower Merion is a good team, but so are we. We try to instill confidence in our players by preparing them and putting them in position to make plays. Our kids see the ball go through the basket and they get confidence.

“I’m super proud of this group. I’m not one for moral victories, but this team buckled down this season, put in a lot of hard work. They left a decent legacy. In the end, they have our program going in the right direction. They gave everything that they had. I’m disappointed the season ended – I wanted to be around this team a little longer.”

Leading scorers for the Ghosts Sunday were Lucas (11 points, nine of them in the final quarter), senior Connor Fields (11) and sophomore Jeremiah Lee (10).

PIAA Class 6A boys basketball: Overtime loss to Scranton should be harbinger of success for Garnet Valley
Radnor’s Jackson Hicke is Main Line Boys Athlete of the Week