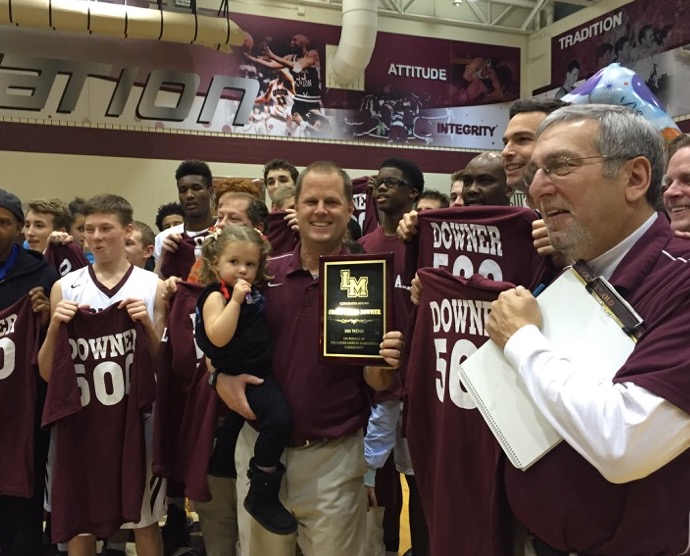 Lower Merion High School boys’ basketball coach Gregg Downer has always put his players and other coaches ahead of himself. Heading into Tuesday night’s Central League match-up against visiting Garnet Valley, the attention was focused on Downer and for good reason.

When the clock ticked under 1:00 remaining, the Lower Merion student section known as the “Dawg Pound” held up signs with 500 printed on them and began chanting “Downer”.

As the chants got louder Downer acknowledged the appreciative student section before giving assistant coach Kevin Grugan a small hug as the final seconds ticked off in a 72-55 win giving Coach Downer his 500th career win at Lower Merion.

“Tonight means a lot,” said Downer following the game while holding his baby daughter Brynn (age 2 1/2). “I usually do not get caught up in any particular number. When you take over a program you hope to establish a family environment and I think we have been able to do that. Aces Nation is one big family and I thought when the students held up the ‘500’ signs I thought that was a neat moment.”

Downer added, “Many people have contributed to this milestone. I have been fortunate to coach many great players and work with many great coaches. I have doing this a long time and I am proud to be the captain of this ship.”

“Tonight means everything,” said Lower Merion senior Eli Needle, who finished with six points and four rebounds. “The coaching staff puts in so much work and for Downer to get his 500th win is special. We know the impact Downer has had on us and so many before us.”

One of the people Needle was talking about when mentioning the players who came before him included B.J. Johnson, who helped lead the Aces to their latest state title in 2013.

“I am definitely proud of him,” said Johnson, who was one many former players in attendance Tuesday evening. “He is one of those coaches who puts players in front of everything else and to share this moment is special.”

With the milestone on the horizon when the year began, Downer and the rest of the coaching staff was in a unique position knowing that most of his starting line-up would consist of players who would be taking the floor with little or no previous experience at the varsity level.

“We wanted this challenge,” said Needle, referring to himself and the other seniors KJ Helton, Zack Magill and Jeremy Horn. “Most of us have not played many minutes prior to this season and we wanted this to be our year and we wanted it to be special. Not many people saw that in us.”

Despite the inexperience, the team has bonded quickly following a season opening loss at Coatesville pulling out three overtime wins at home over Penncrest (in three overtimes); Haverford High School and Shipley School.

“Winning these games have been huge,” said Lower Merion junior Terrell Jones, who finished with 20 points and 10 rebounds against Garnet Valley. “People thought with no Steve (Pendleton), no Jule (Brown) and no Corey (Sherman) that we would struggle. People have been filling their shoes and as long as we keep doing what we are doing we will be okay.”

“The wins have been hard but I think it’s been huge and it helps us get closer as a team,” said Dion Harris, who finished with 15 points and 10 rebounds.

Senior leadership has proven to be vital to the Aces early season success thanks in part to the summer trip to Arizona that included stops at The Grand Canyon, Zion National Park and Northern Arizona for a summer tournament.

“Our seniors have been huge,” said Jones. “KJ went out early with an ankle injury and came back the next day. That showed a lot of character and leadership. Jeremy and Eli have continued to improve. Their leadership will be key.”