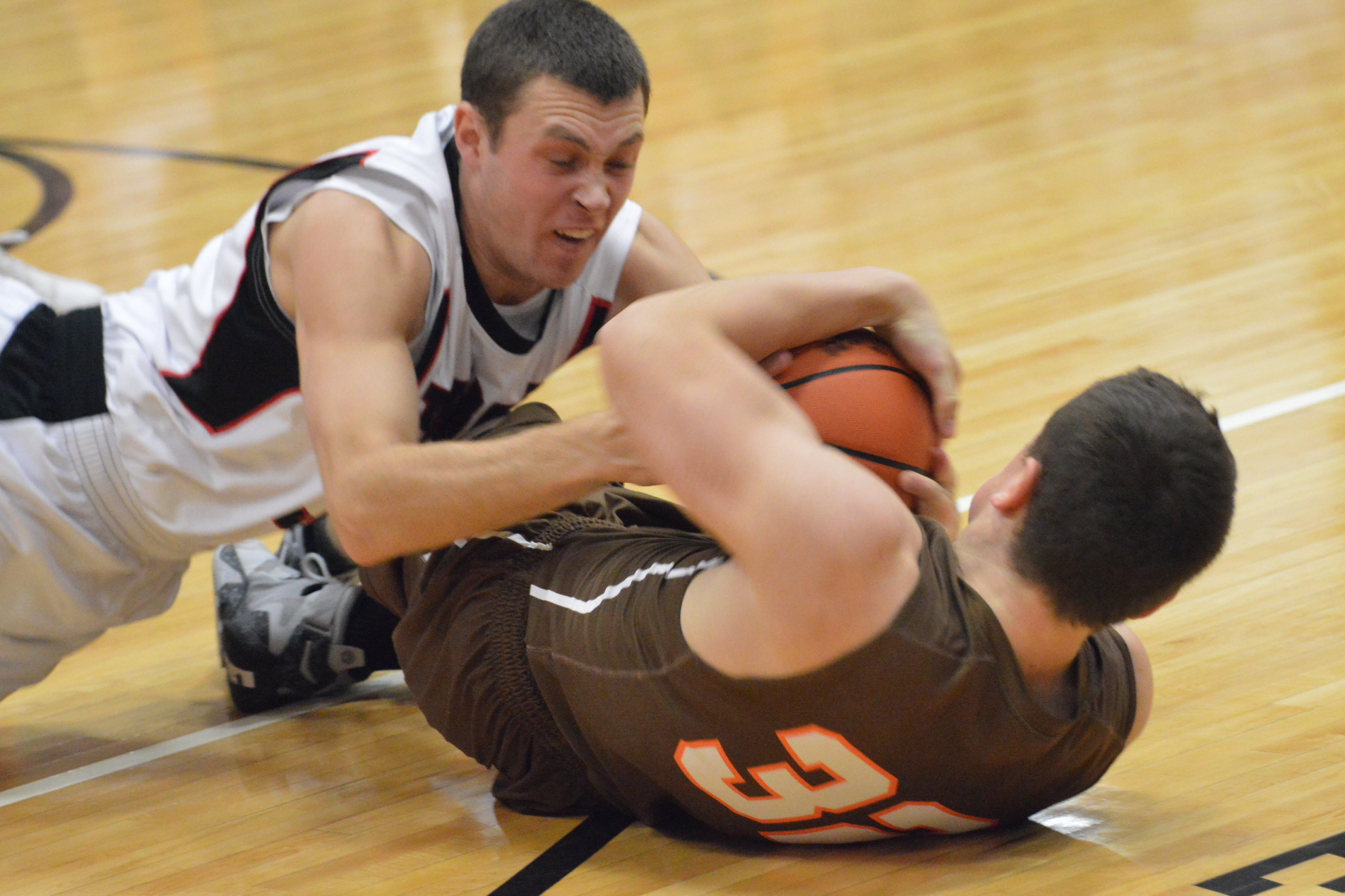 BOYERTOWN >> Boyertown has predicated its undefeated start to team defense and the emergence of Ben Longacre.

Tuesday night, the same rang true as Longacre finished with a team-high 20 points, including two game-sealing free throws, as Boyertown continued its undefeated start with a 51-47 victory over Perkiomen Valley in both team’s PAC-10 opener.

Longacre overcame a woeful 1-for-7 effort from the field in the first quarter to finish with a double-double by the half. The senior forward finished with 15 rebounds and dominated the paint defensively as the Bears (1-0 PAC-10, 3-0 overall) never trailed after taking a 13-11 lead late in the first quarter, leading by as much as nine midway through the third.

Boyertown’s Marcus Thomas looks to kick it out after he drives into the paint. (Sam Stewart – The Mercury)

“He’s (Longacre) been doing everything for us,” Boyertown head coach Mike Ludwig said. “He shut their kid down, he did a phenomenal defensive job. He always gives us what we need offensively but defensively, boy did he play his heart out all night.

Marcus Thomas chipped in with eight points while Jerry Kapp added seven off the bench in the win. Eric Spohn saw his consecutive free-throw streak snap at 24 as he finished the game 4-for-6 from the line. The senior point guard finished with five points and leads the PAC in free throw percentage, shooting 28-for-29 in the team’s first three games.

“It’s been a combination of everybody,” Ludwig said of his team’s undefeated start. “The team defense has really helped us. In all three games when we needed to get defensive stops, we have.

“Eric Spohn has played phenomenal so far, I think he’s missed one foul shot this season. Ben Longacre is playing great and there’s guys all over the court doing stuff, little things that won’t go in the box score.”

All of that mattered against a Vikings team that was coming off an opening-season loss to North Penn. Justin Jaworski finished with a game-high 22 points while Sean Owens chipped in eight as the Vikings kept pace despite shooting 9-for-19 from the free throw line, trimming a 39-30 deficit to one midway through the fourth.

Boyertown’s Ryan Meier drives in for a contested layup in the second quarter. (Sam Stewart – The Mercury)

However, that’s as close they came.

The Vikings went cold from the field in the final minute, missing their last three shots. Jaworski was able to chip into the Bears’ lead with two free throws to make it 49-47 with 15 seconds remaining, but Longacre effectively sealed it at the other end, draining both of his attempts with 3.5 seconds left to preserve the win.

“We left 10 at the line. There’s your insurance policy,” Perkiomen Valley head coach Mike Poysden said. “You can play tight games but you have to have to make free throws. We got people in foul trouble that we wanted to target, but you have to capitalize on that.”

“We’re just a few things small things away. When we take care of those small things, good things will start to happen.”