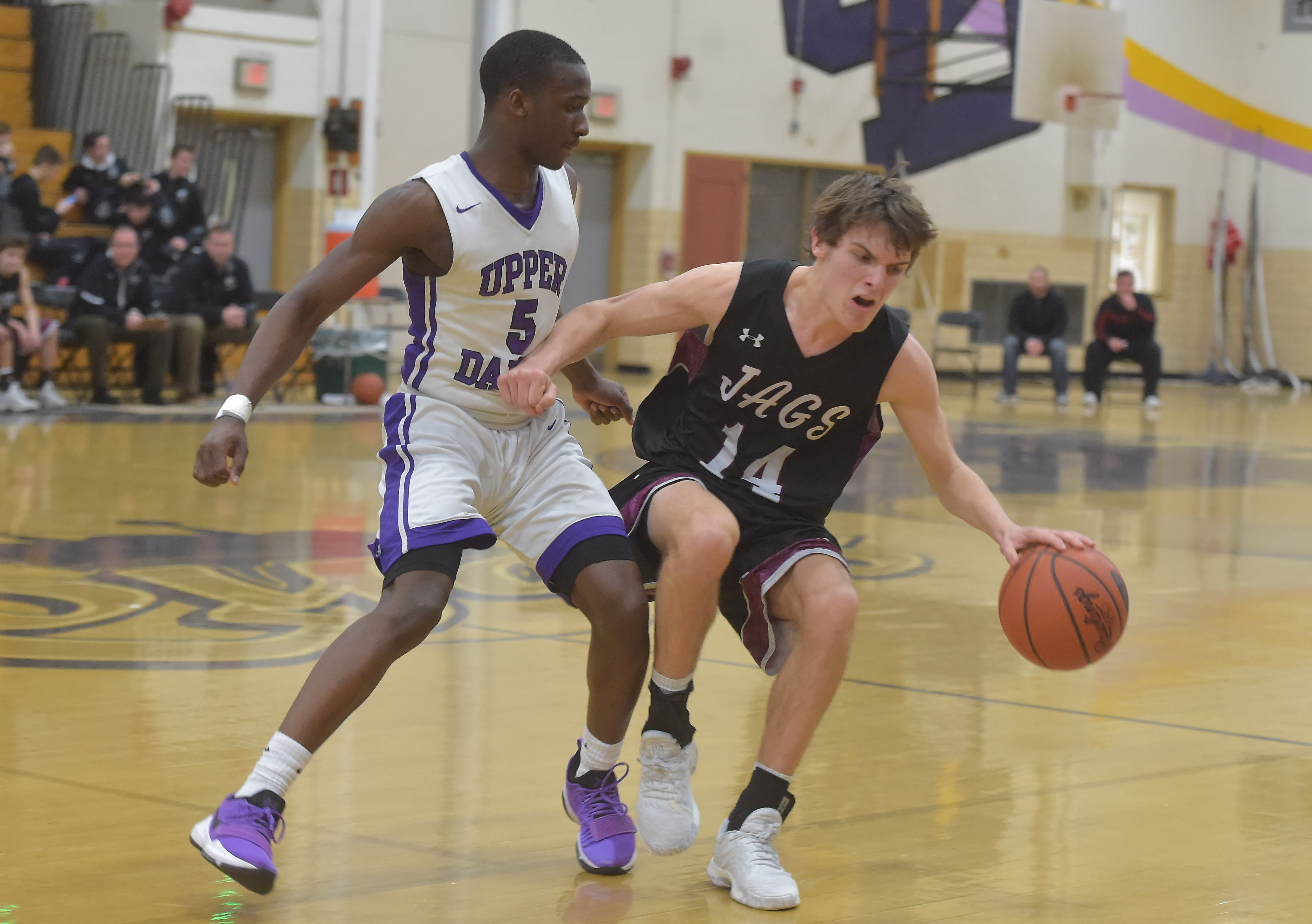 UPPER DARBY >> In a week, Upper Darby and Garnet Valley could find themselves matched up in the Central League semifinals. In two weeks, it could be in the District 1 Class 6A tournament, with a states berth or more on the line.

If Thursday’s intensity and entertainment was any indication, then clear your schedules to watch the next one.

Garnet Valley rode 35 points from Austin Laughlin to prevail, 69-64, in a back-and-forth game between two contenders that are tied for third in the Central League with two games remaining.

Laughlin had the first and final things to say Thursday. He scored the game’s first seven points, Upper Darby spotting the visitors a scoreless first four and a half minutes. And he scored nine in the fourth quarter, including a 4-for-4 effort at the free-throw line. The dagger was a 3-pointer with 3:08 to play, stepping over a screen to knock down one of his seven triples from the top of key.

But for as good as Laughlin was, the win only materialized for the Jaguars (15-5, 10-4 Central) once everyone got involved. Laughlin scored 21 points in the first half, but still Garnet Valley trailed by five.

It got a boost when others stepped up, particularly on the defensive end. Cole Palis provided six third-quarter points. Greg Vlassopoulos, who finished with 18 points, scored five in the third. And Connor O’Brien hit his first basket and only basket, a 3-pointer on the final possession to send Garnet Valley into the fourth up, 53-51. The Jags wouldn’t trail again.

“The defensive end, I think that’s where our offense’s points come from,” Laughlin said. “We get the rebound, we break. I think when we get rebounds, box out, that’s when we push the ball and that’s when we’re at our best.”

The unsung ingredient was Cade Brennan, who scored just two points. He hauled in 15 rebounds and blocked two shots — all in line with expectations for a 6-6, lane-clogging forward. But his five assists, including a pair of kick-outs to Laughlin and several dump-offs to Vlassopoulos flashing across the lane for easy buckets, made the offense hum.

Upper Darby’s success fell along a fine line. Few teams want to move as fast as Garnet Valley, so speeding them up with the Royals’ full-court press wasn’t as advantageous as usual. Instead, the Royals found a sweet spot, pushing the tempo but not too much, in the second and third quarters. They caused 12 turnovers on the day with lanky guard Jalun Trent at the tip of the spear, generating easy offense.

“We have all the energy we need. Hands out, just not much to say,” Trent said. “There’s a lot of pressure to make them commit turnovers.”

For a time, the defense compensated for a lackluster shooting night from everyone but Magd Abdelwahab. The senior guard was on fire in the first, with four of his five 3-pointers, tallying 20 points for the game. But the rest of the Royals were just 1-for-8 from beyond the arc, and the battle of one-on-one between Laughlin and Abdelwahab that appeared imminent in the first half didn’t manifest.

Upper Darby’s (11) Madg Abdelwahab rises for one of his five made 3-pointers in Thursday’s 69-64 loss to Garnet Valley. (Digital First Media/Pete Bannan)

“He’s always on,” Trent said of Abdelwahab. “He’s a great player. We try to get him the ball at least 10 times a game and get him open for 3s.”

The score was tied at 57 when Brennan threaded a pass to Vlassopoulos on a circle cut under the basket to put Garnet Valley up for good with five minutes left. Laughlin supplied the next nine points, the lead oscillating between two and four most of the stretch.

Ultimately, the Jaguars passed their playoff practice test, and they feel confident about what they can do in the future if dropped into similarly contentious situations.

“They’re a really physical team, and they’re really tough,” Brennan said. “It’s hard to put pressure on them, and then they come back and put pressure on us. We just try to get good looks and open shots and when we had the opportunity to fast-break, we did.”

Chester 65, Glen Mills 39 >> Michael Smith and Brian Randolph scored 13 points apiece, and Rahmee Gilbert paired four points with eight assists and five steals as Chester won its 13th in a row, clinching at least a share of the Del Val title. Timothy Johnson and Javan Graham added seven points each as 10 players scored for the Clippers (14-5, 8-0).

Kamrohn Roundtree led Academy Park (6-14, 3-5) with 15 points and 12 rebounds. After fan violence marred the last meeting between the teams, Thursday’s return affair at Academy Park was held in a closed gym.

Shipley 82, Chester Charter School for the Arts 46 >> Akeem Taylor scored 13 points and Bruce Rodgers added nine, but the Sabers (8-12) were no match for Sam Sessoms and his 42 points thanks to nine made 3-pointers.