Just another win (over Chester) for Jackson, Penn Wood 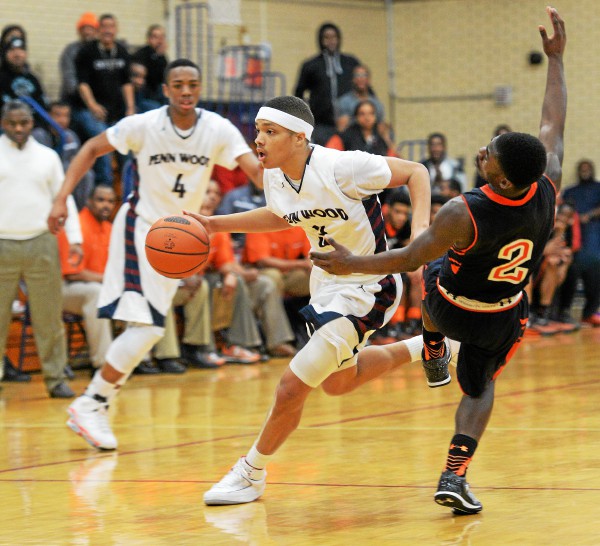 LANSDOWNE — The applause started on the court, where players dogpiled on top of one another, and it followed the Patriots into their locker room. Penn Wood seemed like it had an endless supply of handshakes and high-fives.

“I’m proud of our guys,’ Penn Wood coach Clyde Jones said after his Patriots eked past Chester, 47-46, Thursday night to hand the Clippers their first loss in Del Val League play. “How can you not be after (a game like) this?’

Malik Jackson’s third-quarter 3-pointer punctuated a 14-5 run that helped Penn Wood erase its once eight-point deficit. In the fourth, Jackson’s two free throws with 35 seconds to go made the difference.

Not a great win?

Penn Wood’s post-game celebration sure made it feel like a big game.

“The crowd made it a big game,’ Jackson said.

No matter how they wish to categorize this one, the Patriots (12-5, 4-2) needed this victory. And considering that, only 16 days ago, the Clippers (11-5, 5-1) handed these Patriots a 20-point defeat, the euphoria and aftermath that Thursday’s win produced almost felt unreal.

Unless, of course, you were to have asked Jones’ players.

“Chester played a great game,’ said Scott, who paired a game-best 20 points with five rebounds. “I think they made us better tonight. We just try to do everything our coaches tell us to do and, tonight, we executed.’

“No team that loses by 20 is going to lay down in their house,’ Chester coach Larry Yarbray said.

Chester, which led by six at halftime, hit two of its first three shots in the third quarter to stake a 27-19 lead, its largest of the game.

The Patriots played foul-free ball for nearly 10 minutes, a stretch that coincided with their third-quarter rally. Jackson scored nine points in the final 3:53 of the third to help Penn Wood take a brief 37-35 lead, before Chester popped in two shots before the horn sounded and headed into the fourth ahead, 39-37.

“We started relaxing,’ said Chester guard Keyonte Watkins, who led the Clippers with 17 points. “They got back into the game when we started relaxing. They started making shots they normally don’t make.

“I just think everybody’s licking their chops to play us, and that showed.’

The see-saw game featured six lead changes in the fourth quarter. Jackson, who had been denied the ball by a staunch Chester defense, finally got a hold of it, drove the lane and got fouled. His two subsequent free throws with 35 seconds to go made it a 47-46 game.

The Clippers’ first chance to steal away the lead produced two missed attempts, before the Patriots’ Pernell Ghee grabbed the defensive rebound. Ghee was tied up and the held-ball call favored Chester. The Clippers had new life. This time, Jamar Sudan, who was fouled on a driving layup, missed the front end of a 1-and-1 and Penn Wood’s Calvin Melton hit the deck to grab the loose ball and call timeout with 1.6 seconds to go.

“That’s his will to win,’ Yarbray said of Melton. “He got that last loose ball and called a timeout. Our guys are young and immature and they don’t understand that. You execute those little things and you come up when you should, and you win. How many layups did we miss, 20? How many free throws did we miss, 15?

“The guys have to do the little things and stay together.’

Out of the timeout, Scott missed his first on the 1-and-1 attempt, Chester rebounded and called a timeout, but there was little the Clippers could manage with 0.6 seconds to go.

Jones credited his often-varying zone defense with throwing off Chester’s shooters. He also patted his guys on the back for their patience and commitment. Jones trotted out a different starting lineup for the 13th time in 17 games, a sign that “our kids just don’t care who plays. They just want to win, no matter what,’ he said.

Winning trumped everything for the Patriots, as evidenced by the players sprawled on the hardwood in front of their bench.

But, you know, it’s not like it was a rivalry game or anything.

“Just another game for us,’ Jackson said, “except this time we won.’