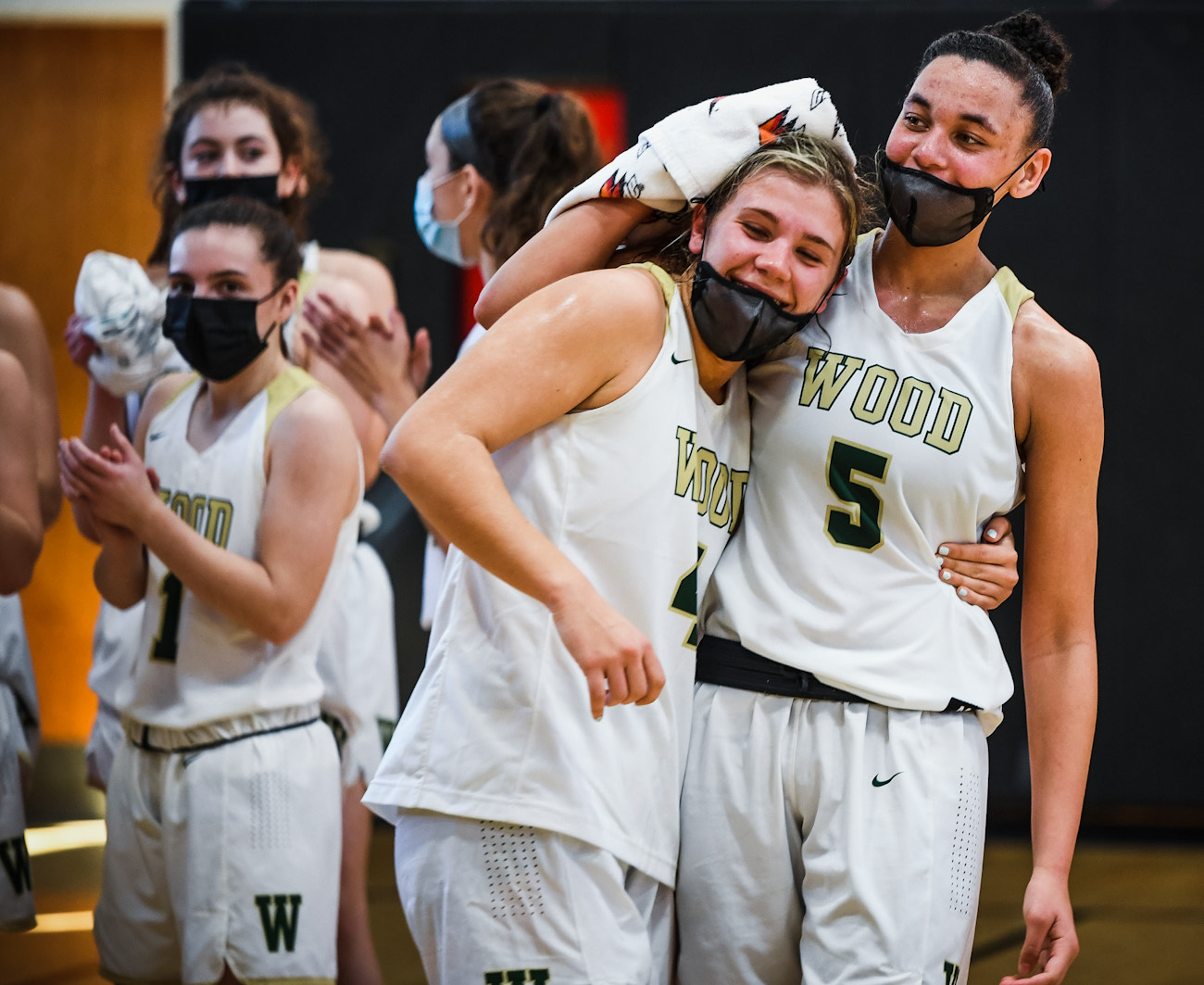 For the seniors of Jenkintown’s girls basketball team and the Archbishop Wood boys and girls programs, the goal is clear for this weekend.

All three teams have earned a trip to Hershey for a chance to play for their respective PIAA championships this weekend at the Giant Center and their seniors are all focused on going out with a win. Aside from the dream of lifting a state title, there are a few other ties that bind the three teams making the trip Friday and Saturday.

Three games, three sets of seniors but one common goal unite the remaining area teams heading into the final days of a high school basketball season unlike any other.

“Once you get there, it kind of takes care of itself one way or another,” Wood girls basketball coach Mike McDonald said after Tuesday’s semifinal win over Scranton Prep. “You’re either ready for that environment or you’re not. I always say you survive the first quarter and then the game can be anybody’s from there.”

Wood’s girls are making their first trip to Hershey since 2018, when they fell to Mars in the Class 5A title game. This year, the Vikings are playing for the Class 4A title against Villa Maria, the undefeated District 10 champion out of Erie at noon on Saturday.

It’s not the first time the two have met in the final game of the season. Wood’s 2016 state title came via a 46-29 win over the Victors.

The casts for each team are new, but the standard of success is not. Wood enters at 16-2 and playing its best basketball of the season after capturing its first PCL title since 2016, claiming a District 12 title and winning state playoff games against quality foes in Gwynedd Mercy Academy and Scranton Prep by solid margins.

Villa Maria is making its 10th appearance in a state title game and its most recent since falling to Bethlehem Catholic in 2017. The Victors got to Hershey by beating a very good Delone Catholic team in Tuesday’s semifinals.

Wood seniors Kaitlyn Orihel and Noelle Baxter are the only two Vikings with state title game experience, but the rest of the roster isn’t short on big game experience especially after going through a PCL Red Division that produced state finalists in West Catholic (3A) and Cardinal O’Hara (5A) and a semifinalist in Archbishop Carroll (6A). The team’s third senior, Dana Kiefer, had a team-high 14 points in the state semifinals.

Saturday could be a big day for Archbishop Wood with the undefeated boys team set to take on District 3 champion Reading at 7:30 in the Class 6A final in the final game of the PIAA season.

The 19-0 Vikings are back in Hershey for the first time since falling to Moon in the 2019 Class 5A final and third time in five years after winning their first state title in 2017. Wood also captured its first PCL title since 2017 and is looking to double-up again.

Standing in their way are the Red Knights, one of the state’s top programs. Coach Rick Perez fought hard to get his guys a chance to play then guided the Knights through a loaded Berks League to a District 3 title and their first state final since 2017 when they won a championship with current San Antonio Spur Lonnie Walker IV leading the way.

This year’s Reading roster doesn’t have a Division I recruit but it’s got plenty of tough, fearless players led by Ruben Rodriguez, Moro Osumanu and Daniel Alcantara

Wood will be hoping to have its ultra-talented starting five back together after senior La Salle recruit Daeshon Shepherd missed the last two games due to COVID contact tracing. Led by two-time PCL MVP Rahsool Diggins, a senior UConn recruit, the Vikings also have seniors Marcus Randolph (Richmond), Jaylen Stinson (JMU) and Muneer Newton with junior reserves Mike Knouse and Tyson Allen stepping up in Shepherd’s stead during the state tournament.

Jenkintown, seeking its second state title in four years, is the first area team to take the court in Hershey with a noon start Friday in the Class A final. The Drakes, who won their first PIAA championship in 2018, will have to get past District 6 champion Bishop Guilfoyle if their seniors want to add one more accomplishment to a staggering list.

Seniors Carly Mulvaney, Molly Walsh, Cady Westkaemper and Lauren Brockwell go into their final game with a career record of 106-4. In their tenure, they were part of coach Jim Romano’s 600th and 700th career wins, ran the program’s streak of District 1 titles to six and played in three state semifinals. They didn’t get that far last year due to COVID-19 ending the season early but did get to claim an undefeated 29-0 season as a consolation prize.

Bishop Guilfoyle got by a very good Rochester team in the semifinals and lean on their standout senior Teresa Haigh, who bagged 28 of her team’s 55 points in the final four round. The Marauders are making their first trip to Hershey since 2011.

Archbishop Wood is hoping to leave Hershey two state titles richer and the same could be said for the Allen family.

Twins Ryanne and Tyson will each have a chance to lift a state title on Saturday, following a winter where the juniors have each won a PCL and District 12 championship.

Tyson, a reserve guard on the boys team, has played a pivotal role during the state tournament coming off the bench to help spell the absence of Daeshon Shepherd and give the Vikings a defensive lift when other starters were in foul trouble. Ryanne, a starting wing on the girls’ team and first team All-PCL pick, has been lights-out in the postseason for Wood including a game-high 19 in the PCL semifinals, a game-best 22 in the PCL title game and two double-digit state playoff outings.

Winning a PCL title has generally led to good things for Archbishop Wood in Hershey.

The girls parlayed their two previous PCL titles since joining the PIAA into state titles in 2011 and 2016 and will try to do the same again on Saturday. It’s the program’s ninth state final overall where the Vikings have posted a 5-3 record.

Last time the boys won the PCL title, in 2017, they rolled their way through the PIAA Class 5A bracket to their first state title with a highly-regarded roster led by PCL MVP Collin Gillespie.

While Wood girls basketball coach Mike McDonald is focused on preparing his team for Saturday’s Class 4A title game, he also has a keen interest in Jenkintown’s state title game on Friday.

McDonald also coaches for the Mid-Atlantic Magic AAU program and two of his players – Drakes seniors Molly Walsh and Carly Mulvaney – will be trying to win their second state titles before heading off to college. Of course, his own roster has plenty of Magic players on it and Wood seniors Noelle Baxter and Dana Kiefer were part of the same 2021 team as Walsh and Mulvaney.

All four have committed to play in college, with Kiefer heading to Bryant, Baxter to Kutztown, Mulvaney to Catholic University and Walsh to Hobart and Smith Colleges.