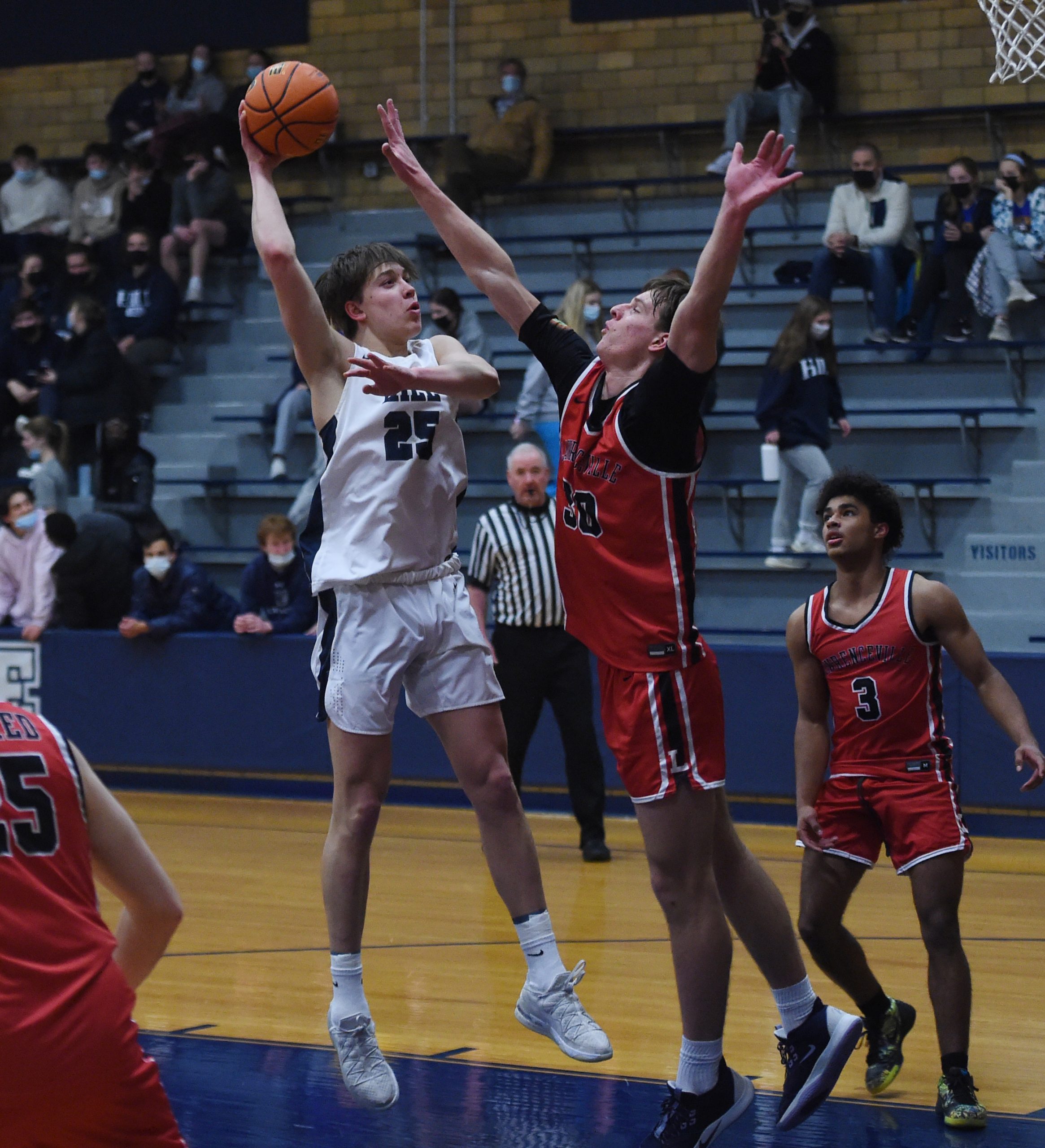 POTTSTOWN >> The Hill School boys basketball team can match up with just about anybody in the front court.

Although Moss, a University of Delaware recruit, recently suffered a torn ACL and will miss the rest of the season, the Blues displayed their remaining interior strength during a 70-55 Mid-Atlantic Prep League win over rival Lawrenceville on Wednesday.

Gerhart led the charge with 21 points and Meuser added 13 as the two anchored the paint on the other end of the floor in an overall dominant defensive effort for the Blues.

“Usually I’m the tallest guy on the court, have no other bigs to play with, but these guys are so fun to play with,” said Meuser, a Stonehill College recruit. “Gabe has the most bounce of anyone I’ve ever played with in my life and then Augie be dunking everything too, so I can just get it on the post, draw two people and throw it over my shoulder and ‘boom!’ it’s a dunk.”

Gerhart and Meuser got going early as Hill jumped out to an 8-0 start over MAPL rival Lawrenceville on Wednesday and never looked back, holding a decisive advantage throughout the entire contest to improve to 2-1 in the MAPL, in second place behind Blair Academy (4-0).

Eight unanswered from Gerhart made it a 22-4 contest with 8:17 to go in the first half. The Blues lead grew to 43-17 at halftime and grew to 30 early in the second half.

“It’s definitely a big strength of ours,” Gerhart said of the Blues’ frontcourt. “But we definitely have great guards too. I wouldn’t say our talent only resides in our front court. We have great guards who can pass the ball and get hot, which allows them to get it inside because (the other team) can’t help out. Gerhart had 14 points in the first and Meuser had nine. They continued to do damage in the second half before making way for the Blues’ reserves with the game out of reach.

Most of the game’s highlights belonged to Gerhart, who showcased the reason why most Ivy League programs are trying to get him to play at their school.

He knocked down an early three, showed off his post moves inside, blocked multiple shots and affected many others.

The final act in the dominant performance was a thunderous fastbreak slam off a no-look pass from Meuser.

Even at the prep school level, Hill’s size and skill inside are unique. Gerhart said the group became close together off the court this season, helping them complement each other on the court.

“Coach (Seth) Eilberg, he has a bunch of drills like forward to forward passing, and just spending time with everybody,” Gerhart said of how the Hill’s bigs meshed. “I spend time with Ethan, we’re in the same dorm. I spend time with Moss, we’re in the same dorm. We eat together, hang out together and it just helps with passing because I know where they want to be and I want to be. Throw a lob, get a dunk, and it’s a lot fun.”

Wednesday’s win was the Blues’ second straight dominant league win after opening MAPL with a loss to Blair Academy. Hill will return to MAPL play Feb. 5 against the Hun School at home and Feb. 8 against Pennington School at home.

Before then, the Blues, who are undefeated against PAISAA schools this season, will face Westtown School, Perkiomen School and Phelps School on Friday, Sunday and Tuesday, respectively, in the first annual PA Cup.

Hill hosts Westtown and Derrick Lively, the No. 1 ranked boys basketball recruit in the Class of 2022, at Gillison Court at 7 p.m. in the second game of doubleheader following Perk vs. Phelps.

“We’re so excited for these upcoming games,” Meuser said. “We all know people that are on the other teams and we’re super excited to get at them. Maybe being the underdog will give us a huge chip on our shoulder to play.” Delco Roundup: Walls helps Interboro break through for a Del Val win
Boys Basketball: Blooming Demetrius Lilley too much for the Fords