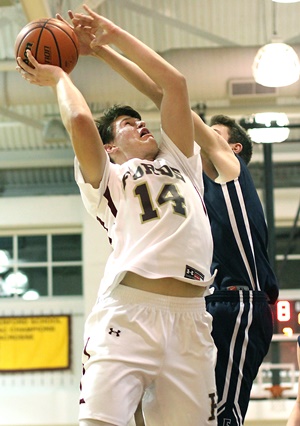 HAVERFORD >>  The Haverford School basketball team made its Senior Night a memorable one Friday, coming back from a 20-point third-quarter deficit to beat Malvern Prep, 93-86.

“Our guys didn’t hang their heads when they were 20 points down,” Haverford coach Bernie Rogers said. “They just keep on plugging, kept playing.”

Although Malvern Prep kept hitting three-pointers in a fast-paced first half (they finished with 16 treys), the Fords picked up scoring momentum of their own midway through the third period, and finished with a flourish, tallying 29 points in the final stanza.

Jack Marshall, one of the four Ford seniors honored, tallied 24 points and made his presence felt inside in the second half. The High Point University-bound senior was accurate from the free throw line, going 10-for-13.

“He was really getting the rim in the second half,” noted Rogers.

“(Burke) made some good decisions and showed lots of poise out there tonight,” said Rogers. “When you play a team that plays at a fast pace like Malvern Prep, you’ve got to make good decisions on the fly.”

Burke hit several 3pointers early in the game, and the Fords led 33-31 midway through the second quarter. But then Malvern went on a 20-6 run to end the first half, getting some potent inside scoring and rebounding from sophomore Billy Corcoran, who finished with 16 points.

The Friars stayed hot, posting an 11-3 run to take a 62-42 lead. But then the Fords slowly came back, as Marshall started hitting from inside, and Haverford cut Malvern’s lead to 71-64 by the end of the third quarter.

“We didn’t play well tonight,” Malvern coach John Harmatuk said. “Sure, we scored well, but you have to guard people too. With a 20-point lead, you have to get stops.”

At the beginning of the fourth quarter, Marshall scored inside, then a minute later made two free throws to cut the Malvern lead to 71-68. A Malvern turnover was followed by Kharon Randolph’s drive to the basket. Then Randolph followed up with another drive to give the hosts a 72-71 lead with 6:07 to play.

Randolph, who entered the game averaging 17 points per InterAc contest, finished with 21 points.

Haverford increased its lead as Burke hit a jumper, then Randolph converted from the corner for a 76-71 advantage.

But the visitors weren’t done yet. Corcoran cashed in on two free throws, then Malvern senior guard Mike Narzikul hit a three-pointer to tie the score at 76-76 with 4:00 left.

Burke hit a 3-pointer from the right side to put the Fords ahead for good, 79-76. Malvern missed a one-and-one, and Randolph got fouled and cashed in both ends of a one-and-one to give the Fords a 81-76 lead. Malvern never got closer than four the rest of the way, and the Fords made 10 of 12 free throws in the final 80 seconds to keep the visitors at bay.

“We’ve been getting better this season, and our four seniors have set a good example for the rest of the team,” said Rogers.