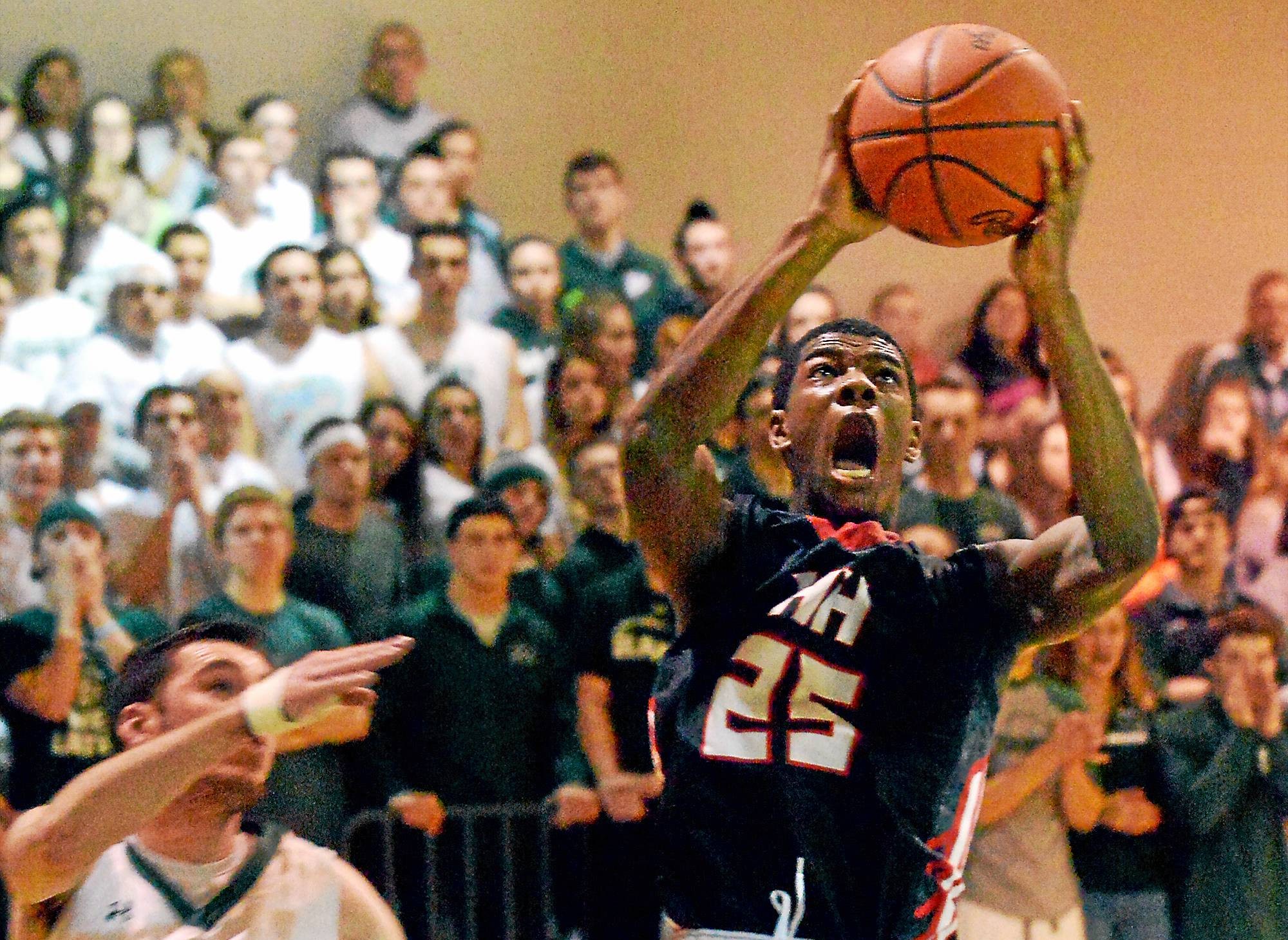 EAST ROCKHILL >> After winning as many games as it lost in the regular season, the Hatboro-Horsham boys basketball team has found something that works in the District 1-AAAA Tournament.

“We always had the talent, but it was kind of like selfishness. Now, we’re starting to play as a team,” Hatters junior Clifton Moore said. “Everybody’s getting an even distribution of points and we’re trusting each other.”

And after Tuesday night, Hatboro-Horsham now finds itself in PIAA postseason play for the first time in 13 seasons after knocking off its third top-eight seeded team in districts, this time Suburban One League Continental Conference rival Pennridge.

Brian McEachern’s layup in the final minute of the 9th/10th place semifinal put the Hatters up one while a Davis steal led to two free throws for a three-point edge with 12.4 seconds left. The Rams had a look at a game-tying three, but the shot hit iron and visiting Hatboro-Horsham held on for a 46-43 victory.

Jay Davis scored 11 of his team-high 15 points in the first half. Moore scored 13 points while McEachern chipped in nine points as the Hatters (14-12) clinch their first state berth since 2003.

“We battled, we lost a couple very close games, but we just show up in practice every day and we work hard and we just try to get better every day. And I think tonight you saw a pretty good basketball team out there,” Hatboro-Horsham coach Ed Enoch said. “And beating that team on this court is a pretty good accomplishment. That’s a heck of a basketball team, well-coached a great, great kids.”

Max Wagner finished with 16 points while Dan Long added 15 points for Pennridge (21-6), which was trying to qualify for PIAAs for the second consecutive season.

“The hard part for me right now, rather than talk about the game, is I’m not going to coach those five seniors anymore,” Rams coach Dean Behrens said. “And I wasn’t ready for that speech yet. So that was hard in the locker room. The kids were invested in this program and it was a great group to coach.”

BOYS BASKETBALL: Pennridge can't get the tying 3 to go & Hatboro-Horsham hangs on for 46-43 win to clinch PIAA bid pic.twitter.com/wOmwwF15Gx

Splitting their first 22 games earned the Hatters the 25th seed in districts, but HH proceeded to bounce No. 8 Strath Haven to reach the second round. A loss to Chester, sent Hatboro-Horhsam to 9/10 playbacks, where its has upset top-seeded Coatesville and No. 5 Pennridge — which won the teams’ two previous meetings this season — to continue the Cinderella run.

It is the third consecutive season a team seeded in the 20s in the District 1-AAAA tournament has made the PIAA playoffs. In 2014, Haverford did it at No. 23 while last year Penncrest reached states as the 28th seed.

The Hatters advance to face No. 18 Academy Park – a 61-54 winner over No. 3 Downingtown East – in the ninth place game Friday at Academy Park. Winner is District 1’s No. 9 seed in states and faces the District 12 champ, either Roman Catholic or Martin Luther King. Loser is 10th and takes on the District 3 champ.

Tuesday’s fourth quarter had six lead changes and two ties. Hatboro-Horsham was up 36-32 at the end of the third, but the Rams were even at 37 after a Sean Yoder jumper. A Long basket gave Pennridge a 39-37 lead, its first since 8-5 in the first quarter.

A McEachern three-point play had the Hatters leading 40-39 at 3:42 before Long answered with a jumper in the lane. A free throw each from McEachern and Davis had HH back up one with 1:50 left.

Wagner worked for a bucket inside for a 43-42 Rams advantage, but McEachern put Hatboro-Horsham up for good, driving down the baseline for a layup.

“He played a valiant game tonight. He’s hurting,” said Enoch of McEachern. “He’s played on basically one leg, but he hung in there and was tremendous, played a tremendous game.”

Pennridge called time out with 15.5 seconds remaining, but Moore reached out and stole the inbounds with the Rams fouling him at 12. 4 seconds. He made both free throws to make it 46-43 Hatters.

“I practice free throws and I miss them sometimes, but when it’s on the line, I get in the zone,” Moore said.

Going for the tie, Long tried a long 3 from the top of the arc, but the shot was off-target. The ball was headed out of bounds before Moore grabbed it and lofted it forward. HH’s Brandon Crews corralled it and the Hatters ran out to clock to celebrate the win with the large student section that made the trip.

“Danny got a look and I thought, ‘That’s going to go in,’” Behrens said. “I thought in the first half I thought we turned the ball over a little bit more than we usually do. And obviously their rebounding was tough. They got in transition on us, too, in that first half, that was disappointing.”

BOYS #BASKETBALL: @danny_long2 knocks down a jumper in the lane, putting Pennridge up 41-40 4Q vs. Hatboro-Horsham. pic.twitter.com/thilrVbR28

Hatboro-Horsham led 13-12 at the end of the first eight minutes then scored the first seven points of the second quarter to lead 20-12 after a Davis free throw at 5:27.

A Wagner basket inside and Stephen Lowry’s corner 3 pulled Pennridge within 20-17, but the Hatters responded with five straight points to lead by eight. The Rams cut the margin down to five at 25-20 before buckets by Crews and David put HH up 29-20 at the break.

Hatboro-Horsham led 32-22 after a Moore three in the third but Pennridge outscored the Hatters 10-4 the rest of the quarter, Wagner’s hoop making the HH’s advantage 36-32 heading to the fourth.