Hamilton, Phoenixville knock off Pottstown to close in on PAC Playoff spot 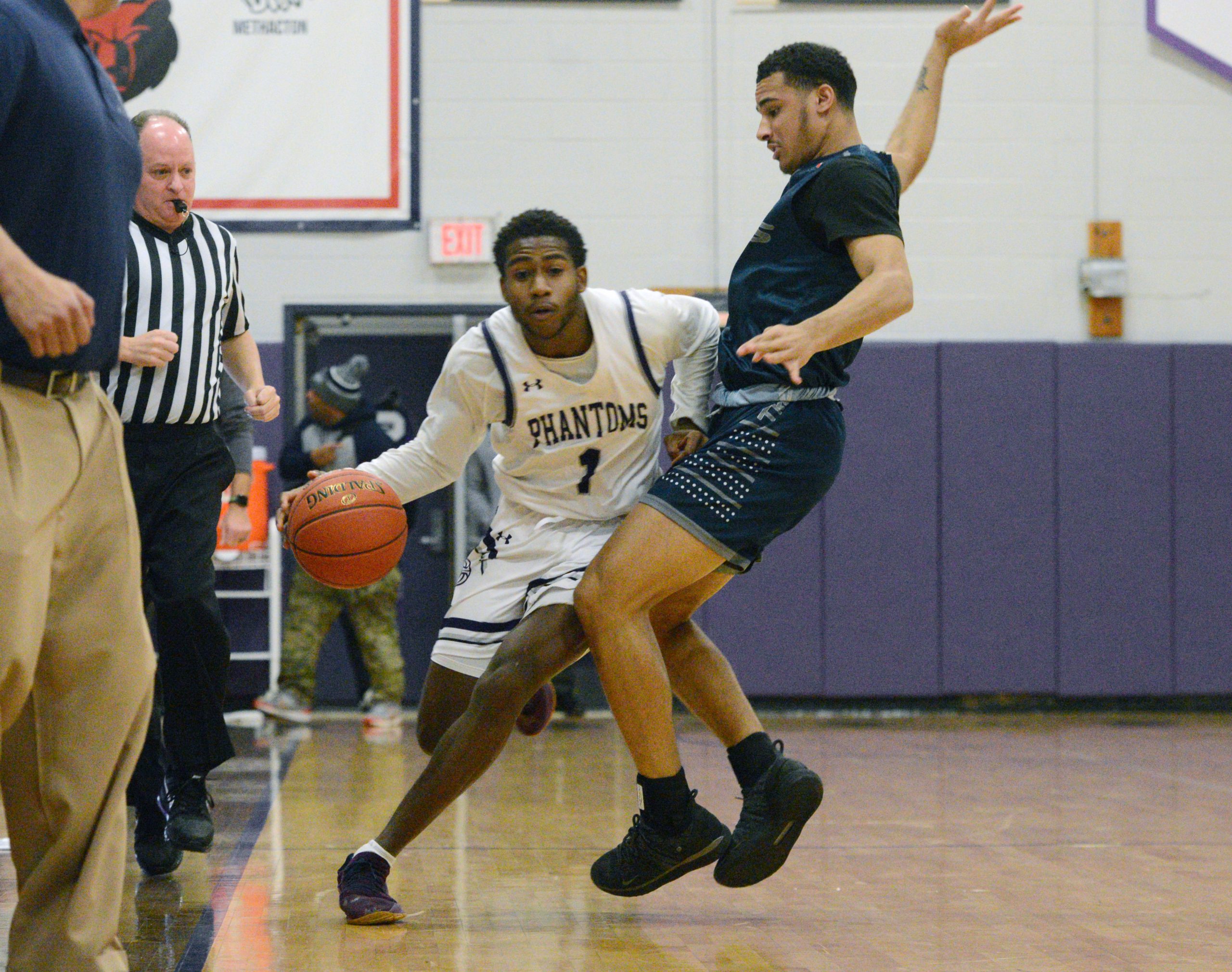 PHOENIXVILLE >> Steven Hamilton and Phoenixville had to wait until the last day of the regular season to determine their postseason fate each of the last two seasons.

A win over Upper Merion sent Phoenixville to the Pioneer Athletic Conference playoffs in 2017-18, a loss to Pottsgrove kept the Phantoms out of the spot one year ago.

Phoenixville had a chance to shore up its postseason fate a little earlier Thursday in a PAC Frontier contest against Pottstown, and Hamilton made sure the opportunity didn’t go to waste.

The senior guard poured in 22 points, including a clutch free-throw performance late, to pick up a 64-57 win over a Trojans team that was also playing for its postseason life.

Steven Hamilton gives Phoenixville a 35-32 lead a minute and a half into Q3. pic.twitter.com/Nt7PDBBxRq

While the victory did not lock up one of the league’s six playoff spots for the Phantoms, it did ensure they need just one win in their three remaining division games to secure a PAC playoff spot.

“Last year and the year before, we put ourselves in the position where we had to beat Pottsgrove in that last PAC game to clinch the last spot in the playoffs,” Hamilton said. “I think going against Pottstown this year, a great team, a great defensive team, I think it just gives us confidence going into the playoffs and solidifies our spot. We’re here.”

After two years showing flashes for Phoenixville, Thursday was one of the games, one of the moments, Hamilton worked for this offseason as he turned himself into ‘the guy’ for the Phantoms.

He later helped close out the win, going 6-for-6 at the foul line in the fourth quarter as part of a 10-for-10 day from the stripe for the PAC’s leading free throw shooter.

“A lot of it comes with working out, going to the gym every single day, working out with my teammates, being a leader for them,” Hamilton said. “Knowing my time is now, and for us to be great, we need that leader, that senior guard to step up, and I wanted that.”

Pottstown (4-3 Frontier, 5-6 PAC, 6-8) needed a win Thursday to move up to a tie for second place in the Frontier with the Phantoms. The top two teams in both divisions make the PAC playoffs along with two wild-card teams determined by overall league record.

The Trojans responded to the opportunity, starting the game as the aggressor and going up 17-8 after the first quarter. Despite leading scorer Towson (16.4 ppg) picking up his second foul less than a minute into the second quarter, Pottstown led 32-29 at halftime.

An 8-0 run by Phoenixville gave the Phantoms a 37-32 advantage early in the third quarter. Though the Trojans tied the game twice in the third and once more in the fourth, they never regained the lead.

After falling behind 57-49 with 2:30 to go in the game, Burress and Tre’ Bass both came away with steals and scores to make it a one-possession game, 57-54, with a minute and a half to play. Phoenixville hit seven of its final eight free throws to close out the win.

The Phantoms are no stranger to playing from behind. They trailed in both Frontier wins over Upper Merion this season, including last week’s 57-52 victory.

Memmo said Phoenixville went into its pressure defense to start the third in order to take the lead. The Phantoms continued their work on the defensive end in the fourth to build on it.

“That’s like the fifth game we’ve been down. We’re used to that,” Memmo said.

“We’re relentless,” he added. “This was for the PAC playoffs. That’s why we played so hard. We knew what was at stake. They did too.”

HALF: Pottstown 32, Phoenixville 29…Steven Hamilton finds Zavier Mayo to beat the buzzer at the end of the half. pic.twitter.com/uX1d8OlCb8

It was the second straight close loss for Pottstown as it now fights an uphill battle for a PAC playoff spot.

The Trojans dropped a five-point game to Phoneixville in the teams’ first meeting back in December. They dropped a 52-50 contest to Perkiomen Valley in the final seconds Saturday in a PAC Crossover game that would have been a big victory.

Unless the Phantoms drop all three of their remaining Frontier games, Pottstown will have to earn one of the PAC’s two wild card spots. Boyertown and Norristown, both 6-4 in the PAC, held those two positions entering Thursday’s games with Phoenixville, Pottstown and Upper Merion a game back.

“It’s just they make a couple more better possessions than us, and we come up short,” Burress said.

“We’ll be good if we pick up the next wins,” he added. “We just need to work harder in practice and stay focused.”

Though the job is not finished yet, it is a welcome feeling for the Phantoms knowing that they have the opportunity to determine their postseason fate a little sooner this year.

“This one was important because we didn’t want to put ourselves in that hole again to try and win out the season,” Hamilton said. “All we have to do is handle our business against the other teams, and we’re in.”