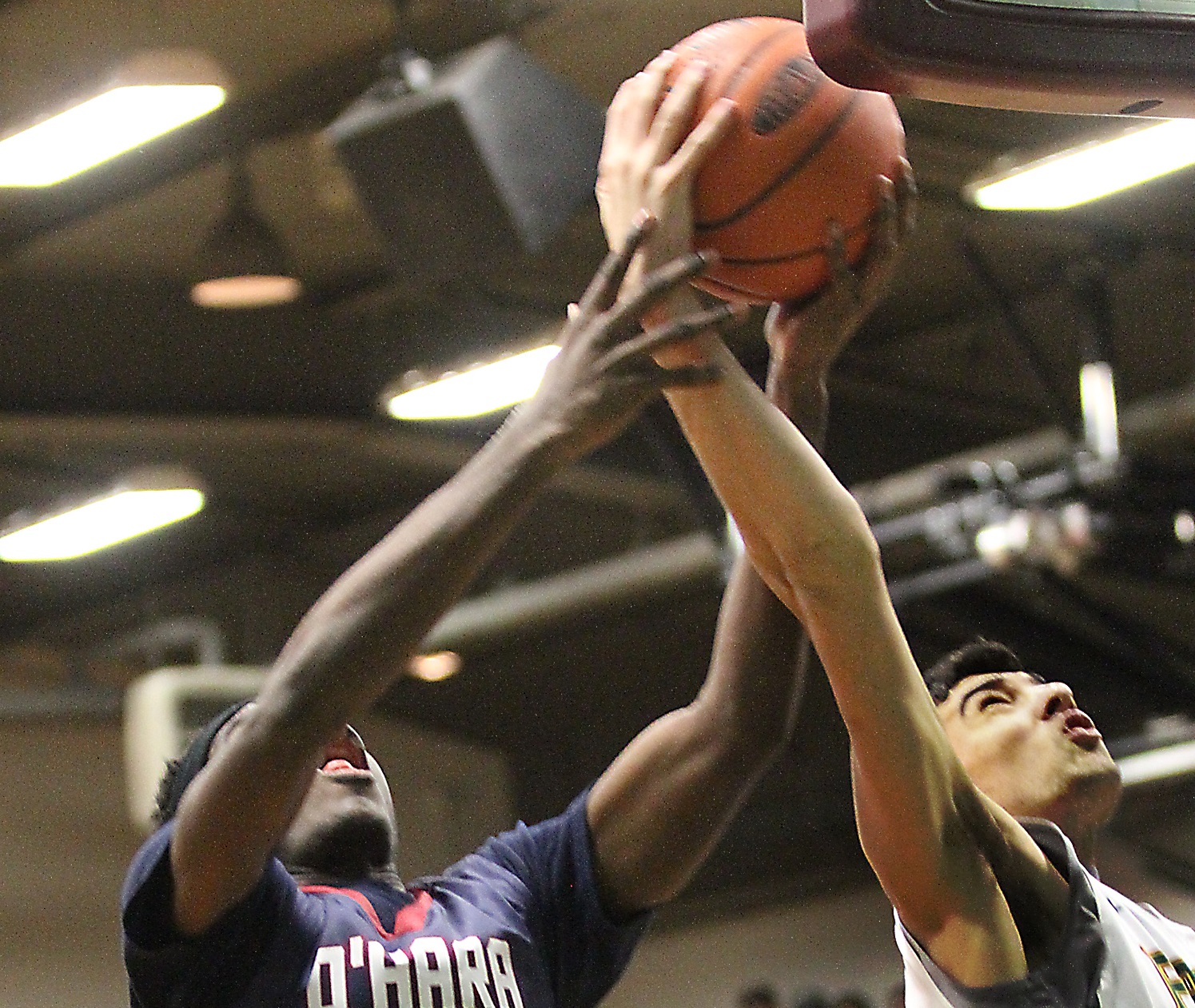 UPPER DARBY >> After three quarters of a game slowly turning in his team’s favor, Bonner & Prendergast coach Jack Concannon wanted a little something extra from his guys to nudge them over the top.

By the time the group reconvened at the bench 2 minutes, 12 seconds later during a Cardinal O’Hara timeout, Ryan Germany had delivered exactly what Concannon wanted.

Germany was the fourth-quarter spark that powered the Friars to a 52-42 Catholic League win Friday night, keyed by an 11-3 run that prominently featured the guard’s influence.

The Friars led by four, 34-30, after three quarters in a back-and-forth affair. But Germany set the Friars on the attack just about as soon as the huddle broke.

“He’s a sparkplug,” Concannon said. “He’s one of the quickest kids you’ll see. He’s able to get the ball into the lane, and he sees the court, so he gets it in the lane and if somebody helps, he dishes it to our big kids. He just creates a lot for our kids.”

Germany misfired on his first two trips to the basket, but John Hargraves was there for putbacks on both. When Germany drove again, he dumped off to Dylan Higgins rolling to the tin for a lay-in. And when O’Hara afforded Germany a cushion, he calmly sank a 3-pointer from the left wing to extend the lead to 10 with a staggering blow for the Lions.

“Penetrating the zone is the best thing to do, so the coaches told me to get to the interior and keep dishing,” Germany said. “We did what we had to do to get the win.”

“When we go to the basket, it just opens up stuff for all the other players,” Higgins said. “And it gets us points. That was our key in the fourth quarter.”

The fourth-quarter offense for Bonner & Prendie (8-6, 2-4) was a departure from the ragged variety of the first three frames. Save for the Hargraves second-chance buckets, all four field goals were assisted, matching the total of dimes from the first three quarters combined.

Against O’Hara’s zone defense, the ability of Germany, Christian Lane and Keith Washington to get to the basket was vital, a much more productive approach than shooting jumpers in the first half.

Coupled with a pair of big men who can move and catch the ball — Hargraves paired 12 points with eight rebounds, while Higgins scored 12 of his 14 after halftime to complement seven boards — the Friars’ late offense was tough to stop.

Cardinal O’Hara’s Jaye’Lyn Peebles scored 17 points, but the Lions could get little else going in a loss to Bonner & Prendergast. (Times Staff/Robert J. Gurecki)

That balance made the twist of the dagger on Germany’s 3-pointer, one of only two Friars’ attempts from deep in the second half, all the more devastating.

“It was a big shot,” said Germany, who scored five points. “We needed to have a big shot, so I knocked it down.”

That included one field-goal attempt for 6-foot-9 Lithuanian Liu Repsys, denied by the strong interior defense of Hargraves and Higgins.

“That takes away a lot because when me and Jaye aren’t making anything and our big men aren’t getting shots, it’s hard for us to get a rhythm,” Griffin said.

O’Hara’s two scoring guards filled the void admirably. Griffin led all scorers with 20, tallying 10 in each half. Peebles waned after a strong first quarter in which he scored seven points, finishing with 17 and making only two baskets in the final three quarters.

On the flipside, all eight Friars who played scored. Mike Perretta nailed a big first-half 3-pointer, while Chris Haynes added three first-half points. Lane was 4-for-4 from the line, while Washington paired seven points with seven rebounds and three assists.

That balance, plus a raucous home atmosphere, helped the Friars see out the grudge-match win.

“We just had to win,” Higgins said. “I was not taking this loss to a rival. I was not letting that happen. I just gave it all I had, put it out on the floor in the second half.”

Also in the Catholic League:

Archbishop Carroll 69, Father Judge 57 >> Ryan Daly scored 12 of his game-high 23 points in the third quarter as the Patriots pulled away from a game effort by the Crusaders.

Episcopal Academy 70, Malvern Prep 69 >> Nick Alikakos scored 27 points, including the 1,000th of his career, and Conner Delaney added 19 points as the Churchmen (11-5, 2-1) gave their Inter-Ac title hopes a boost with a road victory.