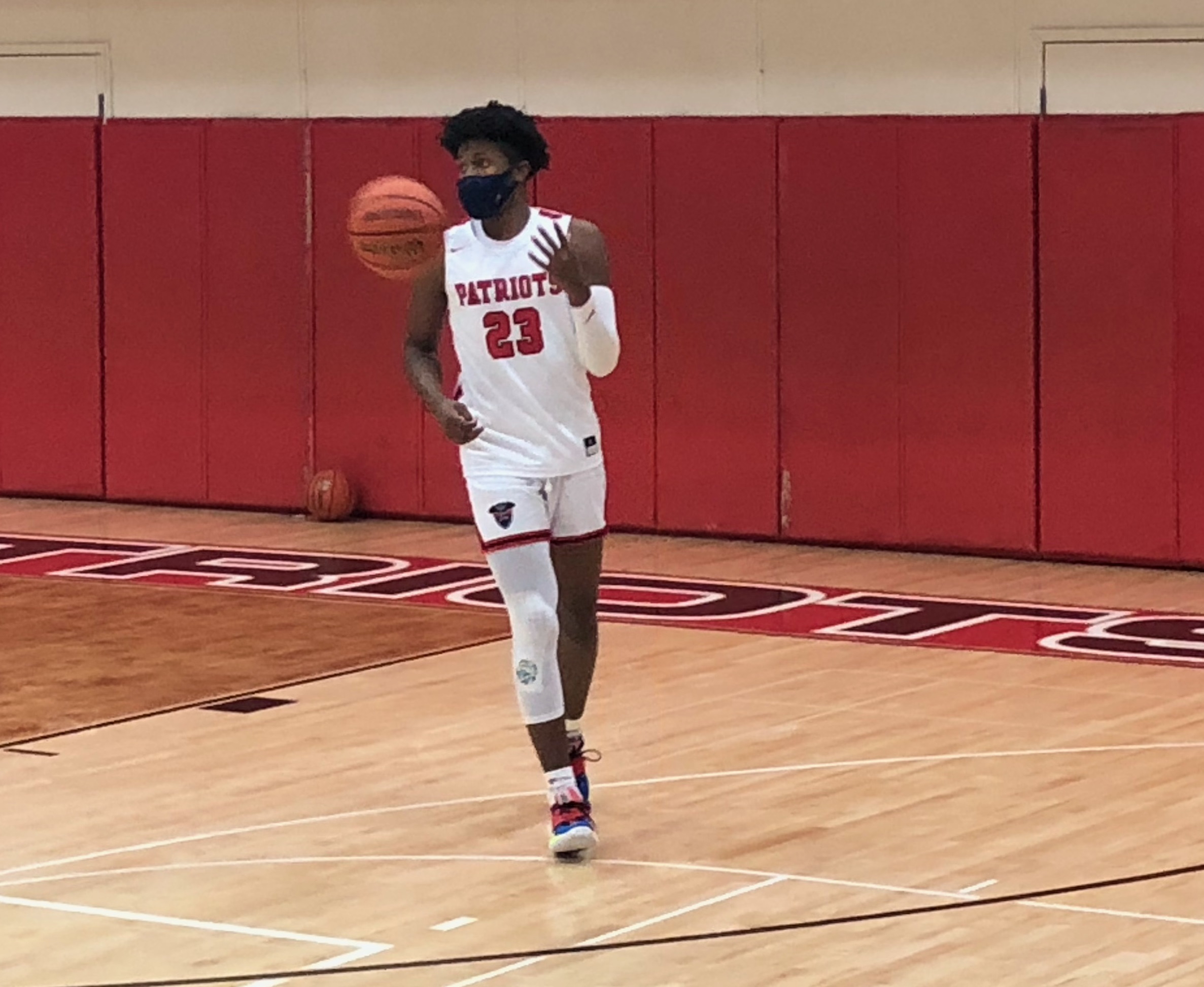 Jordan Longino flips the ball to a teammate during a warm-up. (Andrew Robinson/MediaNews Group)

Jordan Longino’s senior season didn’t last long, but it gave him enough time to leave a legacy.
The Germantown Academy senior finished his career in style and departs with his name atop the program’s all-time scoring list. While the COVID-19 pandemic limited the Inter-Ac to just a handful of games, it couldn’t slow down Longino’s production on the court.

A Villanova recruit, Longino finished his career with 1,763 points, more than anyone else has ever scored in the history of the Patriots’ boys’ basketball program. He passed Alvin Williams, who also went on to play at Villanova and then 11 seasons in the NBA, on February 23.

“It’s really just a blessing,” Longino said after breaking the scoring record. “It’s a lot of thanks to my coaches, my teammates, my family and my brother who helped me to get here. All the thanks and all the love go to them.”

The non-PIAA all-state team is a new addition for this year, as players from schools outside the PIAA were previously included on the all-state classification their schools would fall under through enrollment numbers.

Longino averaged 21.9 ppg in the nine games GA played during the Inter-Ac’s month-long scheduling window in February. He averaged at least 20 points per game all four years of his career and surpassed 1,000 points as a sophomore.

A proficient shooter from his first days with the Patriots, Longino shot 54 percent from the floor as a senior and 85 percent from the foul line. He also averaged seven rebounds per game and had 23 assists on the season.

At the end of March, Longino was selected to participate in American Family Insurance’s national high school 3-point championship, winning the event with a strong shooting performance. He was also selected to play in the 2021 Iverson Classic scheduled for May 7-8 in Memphis, TN.
Longino was a first team all-state selection in Class 4A as a sophomore before earning Player of the Year plaudits as a junior.

A 6-foot-5 guard, Longino was drawing college interest early in basketball but also turned heads in his other sport. As a junior, he threw for nearly 2,000 yards and had FCS programs interested in his abilities as a dual-threat quarterback.

While he decided to pursue basketball over the summer, Longino did still play football in the Patriots’ abbreviated fall season.

“I took some time, talked to my family and thought about it a lot but it was really something that just came to me instantly,” Longino said last year. “I love both sports, I’m passionate about both of them but basketball is something I’ve always had this love for and the competition, the opportunities presenting themselves in college and the opportunity to hopefully one day play in the NBA are dreams I just couldn’t pass up.”

Longino joins a Wildcat roster that looks well-stocked for the 2021-22 season. The four-star recruit joins a class that includes Angelo Brizzi, Nnanna Njoku and Trey Patterson, who arrived on campus early.

Additionally, Villanova got a boost when Jermaine Samuels and Collin Gillespie opted to return for the fifth season the NCAA allotted all seniors due to the pandemic. Gillespie, an Archbishop Wood graduate, was co-Player of the Year in the Big East. The Wildcats will also return Eric Dixon, a redshirt freshman forward from Abington who like Longino was a two-time all-state Player of the Year.

A tireless worker who quickly earned the respect of teammates and coaches with his early-morning workouts and a game that expanded each year he played at GA, Longino is hoping to make an early impact at Villanova.

Passing Williams for the GA scoring title was quite the accomplishment and Longino hopes he can continue to follow in the steps of someone he considers a mentor.

“I texted with him a little bit and he just told me not to put any added pressure on myself,” Longino said in February. “I finally got some bragging rights on him but he’s a guy that had such a high prestige as a player and a person. He’s someone I look up to as a mentor. He’s coached me since I was eight years old so being in the same conversation as him is a blessing.”