Geoghegan: The Blairs living out father-son basketball journey together 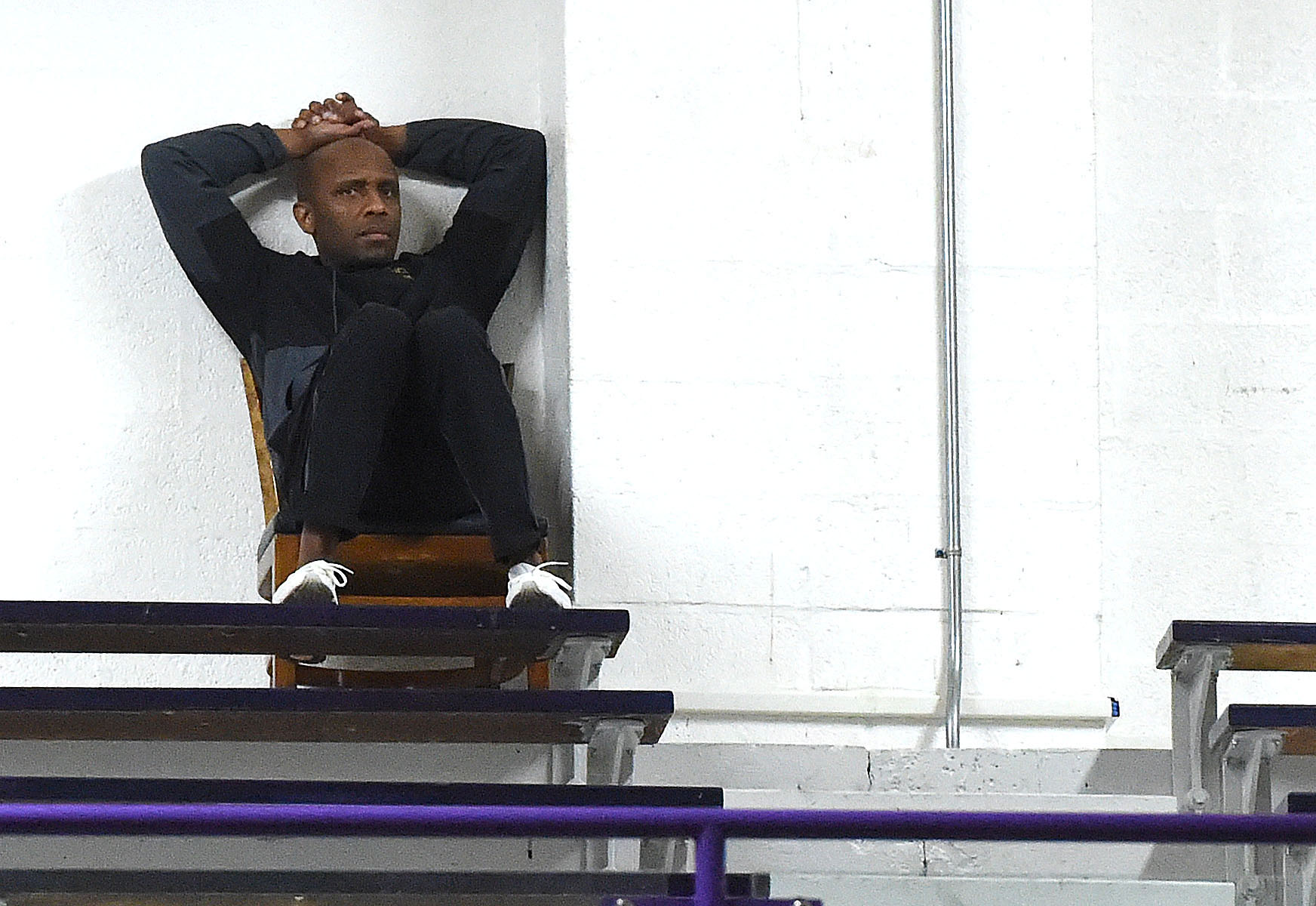 WEST CHESTER >> Sitting all alone in the very last row, tucked in a corner high atop the stands at Hollinger Field House, Damien Blair never looked so out of place.

Just steps away from his coaching office on the third floor, Blair has spent the better part of his adult life in Hollinger, first as a star player at West Chester University in the mid-1990s, and then since 2008 as the first African American head coach of the men’s program at his alma mater.

But on Tuesday, and also last Saturday, during the Ches-Mont Playoffs, Blair wasn’t playing or coaching. He was perched on a chair he borrowed his office and was watching his son, Dylan, help guide Downingtown West to the league championship game.

“Seeing him on this court definitely brings back some memories for me,” Damien said. “And as a parent, everybody kind of lives vicariously through their kids. So it is nice to see him out there enjoying himself.

“Watching Dylan, particularly play in big games, it really hits home that I don’t have any control. I want the best for him and his team, and I want him to enjoy the experience, but there isn’t anything I can do to help him.”

It didn’t wind up being a fun-filled evening for the Blairs on Tuesday. The Vikings employed a highly effective box-and-one defensive scheme – man-to-man on Blair, the four others in a zone – and West Chester East cruised to an ultra-impressive 55-48 win over the Whippets.

Damien Blair poured in more than 2,000 career points at WCU and is number two on the school’s all-time scoring list. He then went to Downingtown High School (now Downingtown West), and authored a 173-78 record with the Whippets to become that program’s winningest boys’ basketball coach.

“I have mixed emotions,” he said, when asked about just watching Dylan play. “During the course of these games, I watch Dylan as a coach and as a fan. When he is playing the way I know he is capable of playing, it is really enjoyable to watch.

“But I have to bite my tongue when there is a bad call, or something he might have done that I disagree with, because I kind of want to bark out instructions. But I have to keep my mouth shut – which is not easy for me to do.”

That’s certainly why he looked so misplaced up in the rafters and not at courtside — so out of his element despite being at a place that he is usually most comfortable.

“I kind of feel like a fish out of water,” Damien acknowledged. “But it’s the best place for me. If I started screaming from that distance, then I would be embarrassing myself. So I go as far away as possible.”

Damien is the first to admit that he was a much different player than Dylan. And it goes well beyond the differences between a shooting guard and a point guard. Keep in mind that Damien was one of the best shooting guards to ever play in the PSAC (number nine on the league’s all-time scoring list). That’s why when he sees his son, he sees similarities with, perhaps, the top three point guards ever to play at WCU: Donta Evans, Hosea Jackson and Ricky Hick.

“I was a different player,” Damien said. “But I do compare him to Donta, Hosea and Ricky – smaller, tough and heady. Point guards that just will their teams to victory. I like that he has a bit of all of them: the tenacity of Ricky, the speed of Hosea and Donta’s ability to shoot.”

The dynamic between father/coach and son/player is always pretty complicated, and it is with the Blairs, to a certain degree.

“Knowing how tough I can be, there are times when he just doesn’t want to hear it. But for the most part, he is receptive to things I say,” Damien said.

“I am always accepting of his coaching,” Dylan added. “I feel like my dad is one of the great basketball minds in the area. When we watch games together, it’s like a complete dissection of the game.

“It’s definitely an advantage for me. Being a coach’s kid there is the added pressure, but for me the only pressure I feel is to play hard and to have fun.”

What happened last week after the Whippets dropped their regular season finale at West Chester Henderson is a fascinating look into the relationship.

“Dylan wound up taking a shot at the end at Henderson that I didn’t necessarily approve of,” Damien explained. “He thought that I was mad he missed it, but I was mad at the timing of the shot.

“After a tough loss, he came out of the locker room and he hugs his mom – and just walks right by me,” he added with a laugh.

It can be difficult for a high school player whose father is a college coach, but Damien isn’t shy about singing Dylan’s praises. Just a junior, he said his son is one of the better point guards in the region.

“I see a better version of myself – to be honest,” Damien said somewhat reluctantly. “At this point in his high school career, he shoots it much better than I did, and from much deeper. And trust me, it is tough for me to say this.

“He has got an unbelievable feel for the game. Out of all of the kids I see at the high school level, he just plays the game the right way and makes the correct decisions. And I’m not just saying it because he is my son.”

There is also another twist. Damien’s wife and Dylan’s mom, Carolyn, also played basketball at WCU. Her maiden name was Amoroso back then.

“They say my mom was feisty and gritty,” Dylan said. “She was all defense, which is the polar opposite of my dad.”

It may be a little too early to even entertain thoughts of college and recruiting – and it’s actually against NCAA rules for a college coach to comment on junior prospects right now. But what about a father talking about his son?

Damien didn’t come right out and say that he is coming to WCU, but he slyly said this: “I don’t even know where the line is because, technically, but he is my son,” Damien pointed out. “I think we all know what is going to happen if he doesn’t get a Division I offer at a school he wants to attend.”

Just like his older brother Hunter (now a student at West Chester), Dylan has been around Golden Rams basketball for most of his life. In fact, just recently a photo was unearthed from when Dylan was in seventh grade that jogged a few memories.

“He is wearing a West Chester jersey, and he’s got a basketball and he’s giving the Ram (hand signal),” Damien said. “Looking back on it, he said to me: ‘What you don’t know is that was when I got my first official college offer.’”

Despite the outcome on Tuesday, Dylan has lots of fond memories of Hollinger going all the way back to when he was about three years old.

“There are pictures on me here when it had the green track, and I was like running all around,” he recalled. “I don’t know if I remember it exactly, but I kind of have a sense of it.”

Damien’s memories, especially from year’s ago, are much more vivid, but equally pleasing.

“He’s been with me here at Hollinger for a lot of it, whether it is games or camps,” he said. “One of the best moments for me was watching Dylan and Hunter play here a couple years ago (for Downingtown West) on the same court that mom and dad played on.”