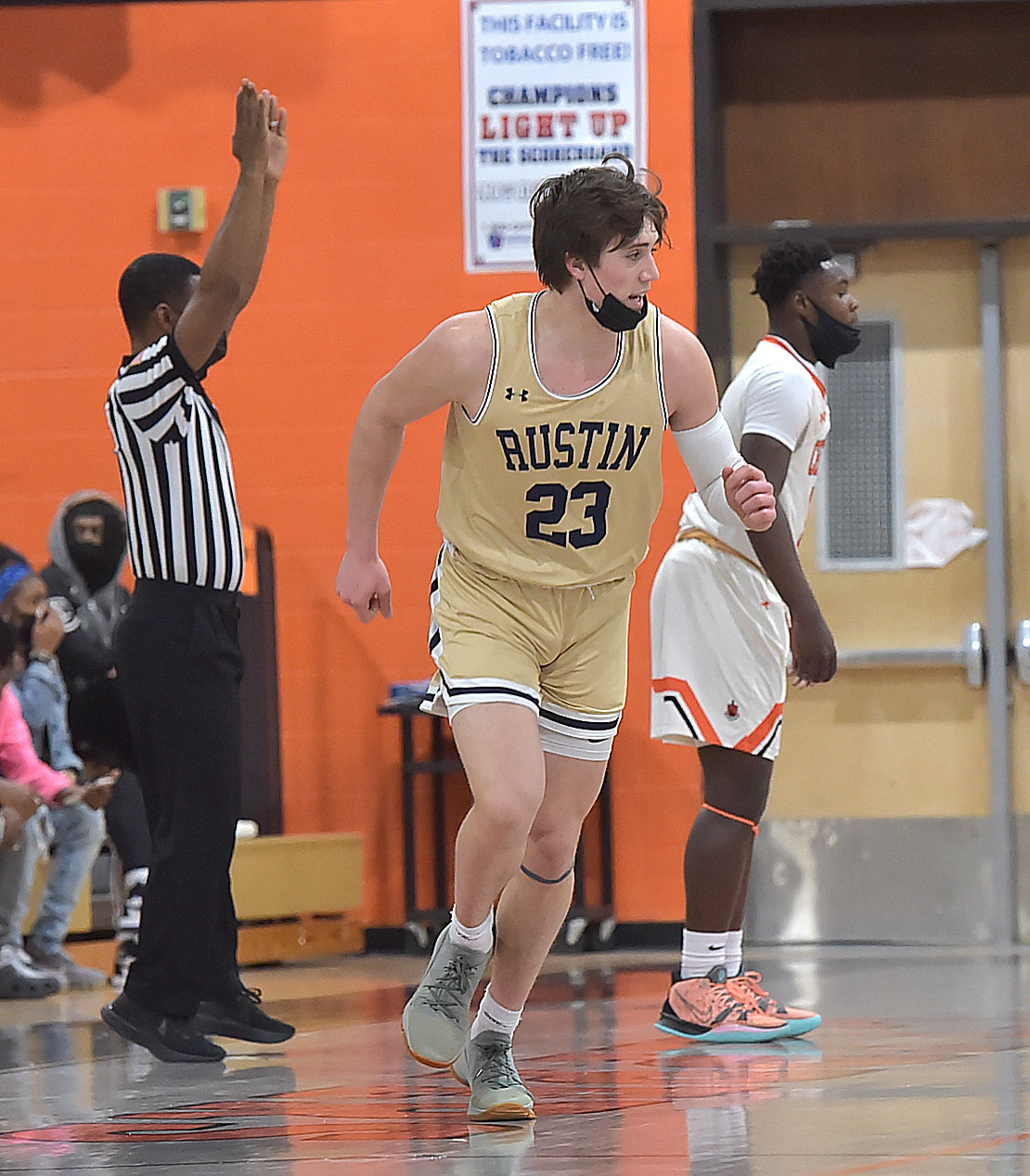 West Chester Rustin's (23) Griffin Barrouk went out on this battle for possession against Chester's (5) Isaiah Freeman in the first quarter. Barrouk went out for the game and the Clippers went on to a 62-46 to win the District 1 title. (PETE BANNAN - MNG)

CHESTER >> Believe it or not, Tuesday evening was a sort of homecoming for Griffin Barrouk.

And just when it looked like the West Chester Rustin star and Hofstra commit was poised for a glorious return to the city of Chester, things went horribly wrong.

When his Rustin squad travelled to meet traditional power Chester in the District 1 Class 5A title game, it wasn’t the first time Barrouk had squared off against this city’s best basketball players. In fact, the 6-foot-5 senior shooting guard has been coming to Chester since he was a pre-teen, testing his skills against the best competition he could find.

The biggest outing of Barrouk’s high school career, however, was also his last. Late in the first quarter, with Rustin trailing by a bucket, he fell to the ground awkwardly while battling against the Clippers’ Isaiah Freeman for a loose ball. It was obvious immediately that this was an injury he was not going to shake off.

“We don’t know the extent of the injury but it didn’t look good,” said Rustin Athletic Director Devon Landgraff.

Landgraff and Rustin head coach Keith Cochran both confirmed the injury was to Barrouk’s right ankle. After being tended to by trainers, he was carried off the court with a brace on his right leg and was rushed to nearby Crozer-Chester Medical Center by ambulance.

“I’m sick to my stomach,” Cochran said after his depleted squad fell 62-46 and had to settle for runner-up district honors. “We don’t know, but it might be an (ankle) dislocation.”

Unfortunately, injuries have plagued Barrouk through most of his high school career. He managed to get through the abridged 2021 season completely healthy – until the very, very end.

“Griffin’s always battled with injuries and to see this happen in a championship game, it’s a real shame,” said fellow senior guard Pete Reinheimer. “He is our best player and we rely on him heavily.

“I mean, that was his last high school basketball game.”

It wound up being a cruel twist on Barrouk’s up and down high school career — that he found his way back to where it all began all those years ago, only to see it all end so abruptly. West Chester Rustin’s (23) Griffin Barrouk went out on this battle for possession against Chester’s (5) Isaiah Freeman in the first quarter. Barrouk went out for the game and the Clippers went on to a 62-46 to win the District 1 title. (PETE BANNAN – MNG)

“It was pretty tough,” Cochran said. “Emotionally, I had to take a minute to gather myself.

“He is our emotional leader and all of our kids look up to him,” Cochran said. “A few of them had tears in their eyes, and I understand that.”

To say it was a disastrous opening quarter for Rustin would be an understatement. Just three minutes in, senior center Jacob Barksdale suffered a game-ending ankle injury. And then two minutes after that, Barrouk went down.

Following a lengthy delay, Cochran gathered the rest of his squad for a circular huddle. With arms draped around each other, Rustin tried to come to grips with what had just transpired.

“We didn’t talk about basketball,” Reinheimer said. “We said a prayer for both Griffin and Jacob. You never want to see something like that happen. We just had to calm ourselves because we had a game to play.”

At the time of the injury, Barrouk had scored seven consecutive points for the Knights, who had cut a deficit to 15-13.

“It is very ironic,” Cochran said. “Griff knows all of these kids at Chester. They grew up on the hardwood together.

“He wasn’t intimidated and they know he can play.”

Growing up in the bucolic suburb of Glen Mills, basketball was a bit off the radar. If you really wanted to be indoctrinated into hard-core hoops culture, the closest place to go was Chester. And the Chester Biddy Youth League was the prime destination.

“I give his parents a lot of credit,” Cochran said. “Not a lot want to see their kids in uncomfortable situations. But I think it helped him.”

Parents Laura and Chuck Barrouk made countless trips down Route 322 to take Griffin to Biddy League games. Chuck played collegiately at Clarion and then spent several seasons with the Washington Generals, who provided the “competition” for the Harlem Globetrotters. He also served as an assistant coach on the Downingtown West coaching staff under Stu Ross. So he knew the value of exposing his son to top-notch competition.

In addition, Griffin’s older brother Bryce — a former Rustin starter — is now a junior forward at Penn-State Brandywine and averaged 17.4 points per game in 2019-20 before sitting out this winter due when the program was shut down due to the coronavirus.

“Griffin does have a very high basketball IQ,” Cochran said. “A lot of people label him as just a shooter, but he rebounds, he passes, he plays solid defense.

“He picked up a lot along the way from his dad and his brother.”

Following two frustrating seasons marred with injuries, Griffin was forced to take a COVID-related basketball hiatus last summer, and the break helped him get healthy. He roared into his senior season and proceeded to lead the Golden Knights in scoring (19.3 per game), rebounding (9.0) and assists (3.0).

“He is a basketball player, so he wouldn’t have taken the time off himself — he would have tried to play through the injuries,” Cochran pointed out.

“It might have been a blessing in disguise because he was able to get totally healthy.”

As a sophomore at Rustin, a broken foot limited Barrouk to just five games. But he provided a bit of a preview by scoring 30-plus in the finale against MaST Charter in district action. A year later, a combination of hamstring and calf injuries severely limited his availability as a junior.

“Once he was injured he couldn’t get healthy. It was one thing after another,” Cochran said.

“I think a lot of it had to do with him dealing with growing pains. Griff came in to Rustin at around 5-foot-4 and he’s 6-5 right now.”

And when the pandemic hit and shut down all AAU competition last summer, Barrouk didn’t get the exposure to college recruiters. Last fall, he visited Division I Hofstra on Long Island, and when head coach Joe Mihalich offered a scholarship, he jumped at the chance.

“Hofstra was his first and only offer,” Cochran said. “He didn’t get a Division II offer. He had a lot of interest but they wanted to see him live as a senior.

“I believe Hofstra is getting a steal.”

Heavy graduation losses and the departure of IV Pettit to Devon Prep meant that Rustin had just two returning starters for 2021. But with Barrouk leading the way, the Knights went 10-5 and earned the fourth seed for districts.

“He is a consummate leader and team player,” Cochran said. “We would not be what we are without him.

“The crazy thing is that I think he is still growing,” Cochran said. “He could still have an inch or two to grow, which could be very scary. He leaves college at 6-6, we might see him at a Sixers’ tryout.”

A shooting guard who has developed into one of the district’s best perimeter shooters, Barrouk is still a bit underestimated. A lot of it has to do with his limited varsity resume due to all of the injuries. He is known on every scouting report as a deadly 3-point threat, but his game is more versatile than most believe.

“Shooting isn’t his only weapon. I think that’s a testament to his overall understanding of the game,” Cochran said.

Unfortunately, circumstances robbed Barrouk of showing what he is capable of doing in a championship setting, with a berth in the PIAA quarterfinals at stake. We will never know if Rustin could have pulled off the upset not for the freakish injuries.

“I am proud of my kids. They were in a situation they have never been in.”