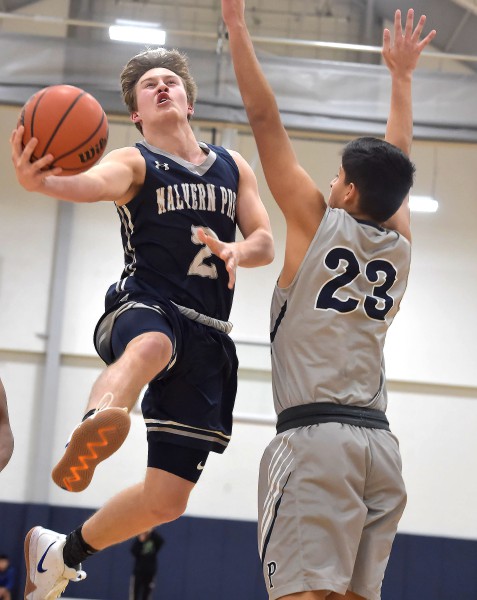 Malvern >> Malvern Prep guards Tygee Leach and Rahdir Hicks proved to be the perfect prescription against host Phelps’ defensive pressure in a 67-56 win Wednesday evening.
Friars’ head coach John Harmatuk said, “When you’ve got good guards like we do, it’s easy to go against presses. I trust both Tygee Leach and Rahdir Hicks to split traps and attack versus presses.”
Malvern (2-2) committed few turnovers Wednesday evening and maintained a lead throughout the evening. On the other hand, whenever host Phelps (1-1) crept within a couple of points, the Friars would surge ahead, often after forcing a couple of turnovers by the Lions.
“We had really good pressure on the ball,” said Harmatuk. “Phelps has a lot of size, and if they can run their stuff, then we’re going to have a hard time guarding them.”
Malvern junior Deuce Turner tallied 24 points to lead all scorers.
“We broke the press well, we moved the ball well,” said Turner. “We saw earlier films of Phelps and saw how they ran their press and practiced ways to break that press. And we made open shots – that was the biggest thing.
“We brought a motto to our team that the score was tied no matter whether we were up by five or 15. We played good transition defense tonight; when we got out on the break, we got a lot of easy points.”
Phelps kept the score close in the first half and trailed Malvern by only two points, 26-24, midway through the second period. The Friars then went on an 8-0 run; after Hicks scored underneath, Leach scored three consecutive baskets on a putback, an end-to-end drive and a layup following a Phelps turnover.
Leach finished the night with 14 points, including 6-for-6 from the free throw line.
“We’re starting to learn to play together, and having Tygee back from playing football is a huge help,” said Turner. “He’s good in the locker room, he’s got plenty of experience as a senior, and he’s a great defensive player.”
Phelps crept back to within 51-49 at the end of the third quarter, as the Lions’ Ronnie Ellis tallied 11 points in the third period alone.
In the fourth period, Malvern limited Phelps to just seven points, and relied on balanced scoring to gradually pull away from the Lions.
“I thought it was a good solid team effort,” said Harmatuk. “Franny Oschell (10 points) did a really good job on the boards tonight, and Spencer Cochran did a good job stretching the defense with his three-point shooting.”
Cochran hit a trio of treys, finishing with 11 points. Hicks tallied eight points.
“We’re making good progress – yesterday [Tuesday] was the first practice we had with everyone,” said Harmatuk, who missed the Friars’ first week of practice due to his father’s death. “Right after Friday tryouts, I had to rush home to Houston, so I missed a whole week.”
For Phelps Wednesday evening, Turner led the scoring with 16 points, Justin Anderson was next with nine and Tristan Isaac tallied eight.
“We didn’t play with enough poise tonight,” said Phelps head coach Brian Shanahan. “Today we had 12 live ball turnovers, which makes it really hard to win a game. With the turnovers, we just couldn’t get in a rhythm.
“Right now, we’re pressing teams [defensively], and trying to get up and down because I think we have athletes, but Malvern has some pretty good guards – Hicks had good poise out there, he was able to handle things
“We’re a team with a lot of new faces; we need to grow and learn from tonight’s game. This is only December, we want to be playing in late February, playing our best basketball, so we’ve got to get better.”
Wednesday’s game was the second contest for the Lions in their new athletic center. Their former facility – still standing – dated to 1960.
“Our new facility is terrific,” said Shanahan. “It’s a real upgrade for our school, and a great atmosphere for a game. To have so many courts, to have such a big court, is great for our kids.”
Up next for Phelps is the Peddie School Invitational. The Friars’ next game is against Saint Joseph’s Prep Friday, then LaSalle on Sunday.
“We play as tough a schedule as anyone in the city,” said Harmatuk. “We like challenges early in the year, so we’re looking forward to those games.”