For McErlane family, Ny’Ques Farlow-Davis’ murder is a loss unlike any other 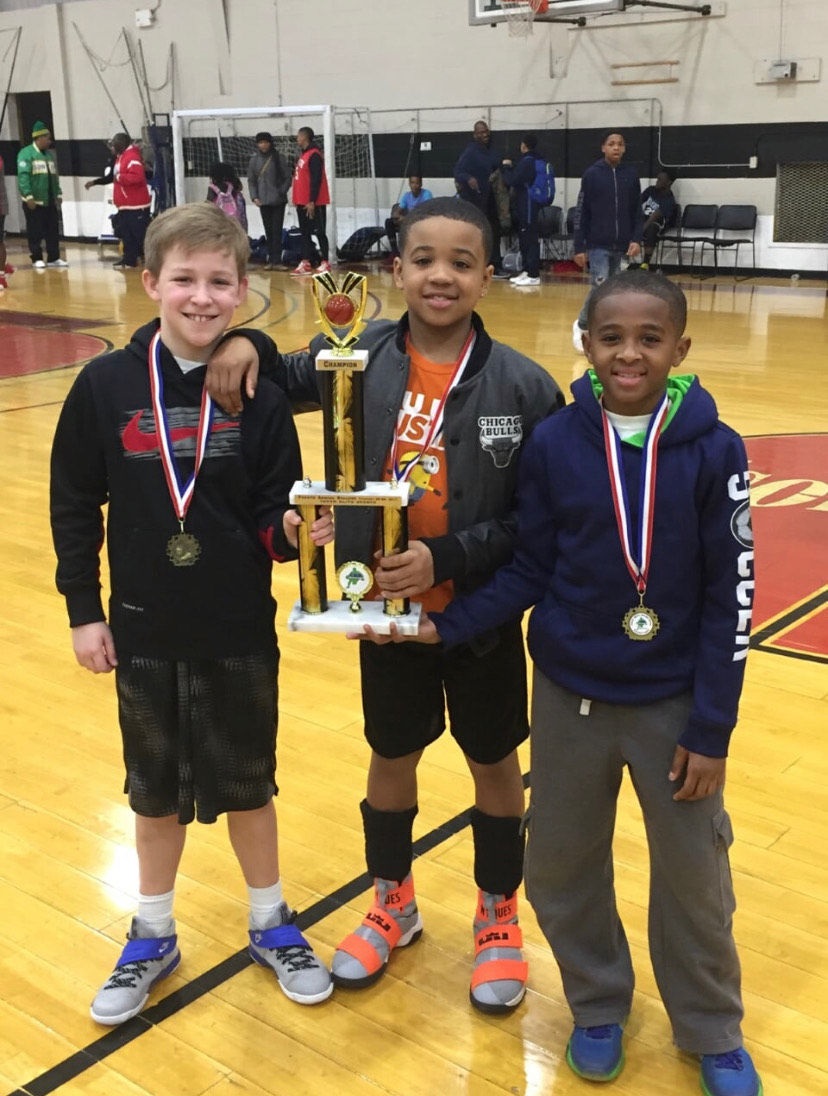 For the last six years, the McErlane family had the pleasure of knowing a young boy from Chester who left a lasting impression on essentially everyone he met.

Ny’Ques Farlow-Davis had the whole world in front of him. An outstanding football and basketball player, he had the potential to be the next great athlete to come out of the city of Chester.

Maeve and Taig McErlane, who live in Drexel Hill, recognized that one-of-a-kind talent at a very early age. Taig, who recently finished seventh grade, was a teammate and close friend of Ny’Ques, playing with him in the Chester Biddy League. Maeve is a rising junior and All-Delco basketball player at Academy of Notre Dame in Radnor.

“For the past six years, they’ve been on the same Chester Biddy team and then they went on to the same AAU team,” Maeve McErlane said. “Ny’Ques was a really big part of our family, especially in the basketball aspect. We’ve always wanted the best for him and see what and where his future held for him. And as time went on, Ny’Ques then went to St. Aloysius (Academy), which is my brother’s school. I would say that made them closer and made Ny’Ques closer to our family even more. I would say that Ny’Ques was a part of our family and we wanted what was best for him, and like I said, to see what his future held.”

The McErlane family — Maeve, younger brother Taig, and parents Marnie and John — is mourning the senseless death of Farlow-Davis, who was murdered in Chester last month. Four city residents were arrested in connection with the murder earlier this week. The McErlanes are hurting, and wish their friend Ny’Ques was here to play basketball or shoot the breeze with just like before.

Maeve asked each of her family members to describe Farlow-Davis in three words.

“My mom said, ‘charismatic, kind, exceptional.’ Taig said, ‘caring, dedicated and (a) beast.’ And my dad said, ‘vibrant, dynamic and assured,'” Maeve said. “In all of that you see how caring and what a great kid he was, and also just how exceptional his athletic abilities were and how those abilities made him an even greater person.”

Taig played too many basketball games to count with Ny’Ques. For years, the both of them were two of the best players in their age division for K.C. Electric under coach Troy Womack. According to the Chester Biddy League website, Farlow-Davis scored 276 points in nine games for an average of 30.7 points. Taig McErlane was third on the team in scoring at 12.7 points per game.

Taig’s involvement with the Chester Biddy League, and the friendships he’s forged with many children his age from the Chester community, is influenced by his parents, who were basketball standouts. John played his high school ball at Cardinal Dougherty, where he later coached, for longtime coach Mark Heimerdinger. Marnie (nee McBreen) starred at Cardinal O’Hara and La Salle in the 1990s.

John and Marnie knew for Taig to develop and reach his potential on the basketball court, they had to expose him to some of the top talent in the area. They learned more about the Chester Biddys from family friend Brian Daly, the former head coach at Monsignor Bonner.

“I’m a Northeast Philly guy, so when I came here — with my wife, who is a Delco girl — we didn’t have any idea where to have our kids play basketball,” John said. “Over time I got to speak with Brian and he’s had such a great experience with his kids down there … that we thought we could take our kids down there, too. (Chester Biddy League president) Ralph Dorsey and I just hit it off. … We ended up just loving it down there. They took Taig in and he ran with it.”

Taig said he loved everything about his buddy Ny’Ques, including “his family, his parents. They are great people.”

“He never put anyone down,” Taig McErlane added. “He would always keep everyone up.”

Farlow-Davis was 13 when he succumbed to multiple gunshot wounds in the back yard of a home near 20th and Potter streets in Chester. Witnesses said Farlow-Davis was seen running and hopping fences to avoid the gunfire. He was on his way to basketball practice. Farlow-Davis was survived by his loving grandparents, Kyle and Roslyn, who raised him and considered him their own child. His grandparents were known to everyone as Ny’Ques’ mom and dad.

Kyle and Rosalyn Davis were married in July 2019. The McErlanes were among the friends they invited to share in the celebration of their big day.

“They’re great people and I knew that from the very beginning,” Kyle Davis said. “I know good people when I see them and they magnify that. I am not originally from this area but I’ve been here long enough to know what’s going on. … They are a great, great family.”

Kyle moved to Chester from Louisiana more than two decades ago. He attended college at LSU. Ny’Ques was born in the city of Chester and, as a youngster, cheered for his grandfather’s favorite football team, the New Orleans Saints. In 2014, the Daily Times wrote a story on Kyle and Ny’Ques in the week leading up to the Eagles-Saints first-round playoff game.

In the article, seven-year-old Ny’Ques was quoted as saying, “I want them to kick the Eagles’ butt.” The Saints won the game, 26-24.

Kyle Davis said his family has been touched with all the support they have received during these trying times.

“It pulls at the heart strings and we do appreciate everything,” he said. “The outreach that’s been going on and the attention, that is something I’ve been telling Ny’Ques since he was five years old, man. He’s the guy. People loved and looked up to him. He was golden.”

“I know my family and so many other people who had known Ny’Ques never went through any of this before. I would say that you can’t take any day for granted because you never know what’s going to happen,” Maeve said. “For Ny’Ques, he was going to a basketball workout and unfortunately that happened and he had no idea what was happening. What I am learning, I would say, is always take those moments with your family and your friends and take them to heart, because you never know when or if you’re going to see them again. That, to me, is one of the biggest things I’ve taken out of this situation.”

John and Marnie McErlane with Ny’Ques Farlow-Davis at the wedding of Kyle and Rosalyn in July 2019. (Submitted Photo/McErlane Family)

The McErlanes want to provide as much emotional support as necessary and to help Ny’Ques’ grandparents in any way possible.

“My dad has been there a lot for Kyle and we have been there a lot for their family. We’re still trying to figure out something to do for them, but right now we want to be there for them and to support them with everything they are going through,” Maeve said. “I would say that’s the biggest part right now. Me and my brother are going to play for Ny’Ques and work even harder because we don’t want his legacy to be let go. We’re going to work 10 times harder than we worked before Ny’Ques left, because he was going to be great and that’s what we want to do for him and in his memory.”

The homicide was the 17th in Chester this year. That horrid reality doesn’t take anything away from all the good that happens in the crime-stricken city. Maeve and Taig McErlane may live in Drexel Hill, but Chester is a huge part of their youth experience, a city that remains in their hearts and minds.

“I remember when I was a young kid, you would hear these things about Chester, like it’s not the best community. That’s not true,” Maeve said. “Once you meet every single person in that community, it really changes your perspective. With Ros, Kyle and Ny’Ques, they are some of the nicest, caring and kind people you can ever meet. You know, there’s always bad people somewhere, but the people of Chester are great people.”

The McErlane siblings speak glowingly about Ny’Ques Farlow-Davis’ talents in both basketball and football. In some ways, he was a sports hero to Maeve and Taig. They would watch in awe as Farlow-Davis dribbled, juked and scored. He was the best player on the floor, or on the field, every time he played.

“His ability to just do moves; you would be watching him and he would just pull this move out of his pocket and your jaw would drop,” Maeve said. “You would watch him and think, ‘Wow, how does an eighth grader do this?

“I remember the first time I watched him play six years ago, thinking, ‘Oh my gosh, look at this kid play. He’s going to be great.’ He just had the potential to do anything he wanted on the court. He had God-given talent and it was great. His ability, his moves, were insane. Watching him play was really fun.”

Today, Maeve and Taig want their late friend’s family to know, simply, they are thinking about them and will always love Ny’Ques.

“Ny’Ques’ memory will never be forgotten in our family and I’m pretty sure in every family that knew Ny’Ques. When you saw Ny’Ques, his dad Kyle would say that he is the chosen one, and I would have to agree with that,” Maeve said. “It was insane how great he was in football and basketball. I saw him going Division I in one of those sports because, honestly, he was that good that he could play both. I saw him going pro in either one of those sports. You just knew it.

“You don’t see that with kids that age, but that is how good Ny’Ques was.”