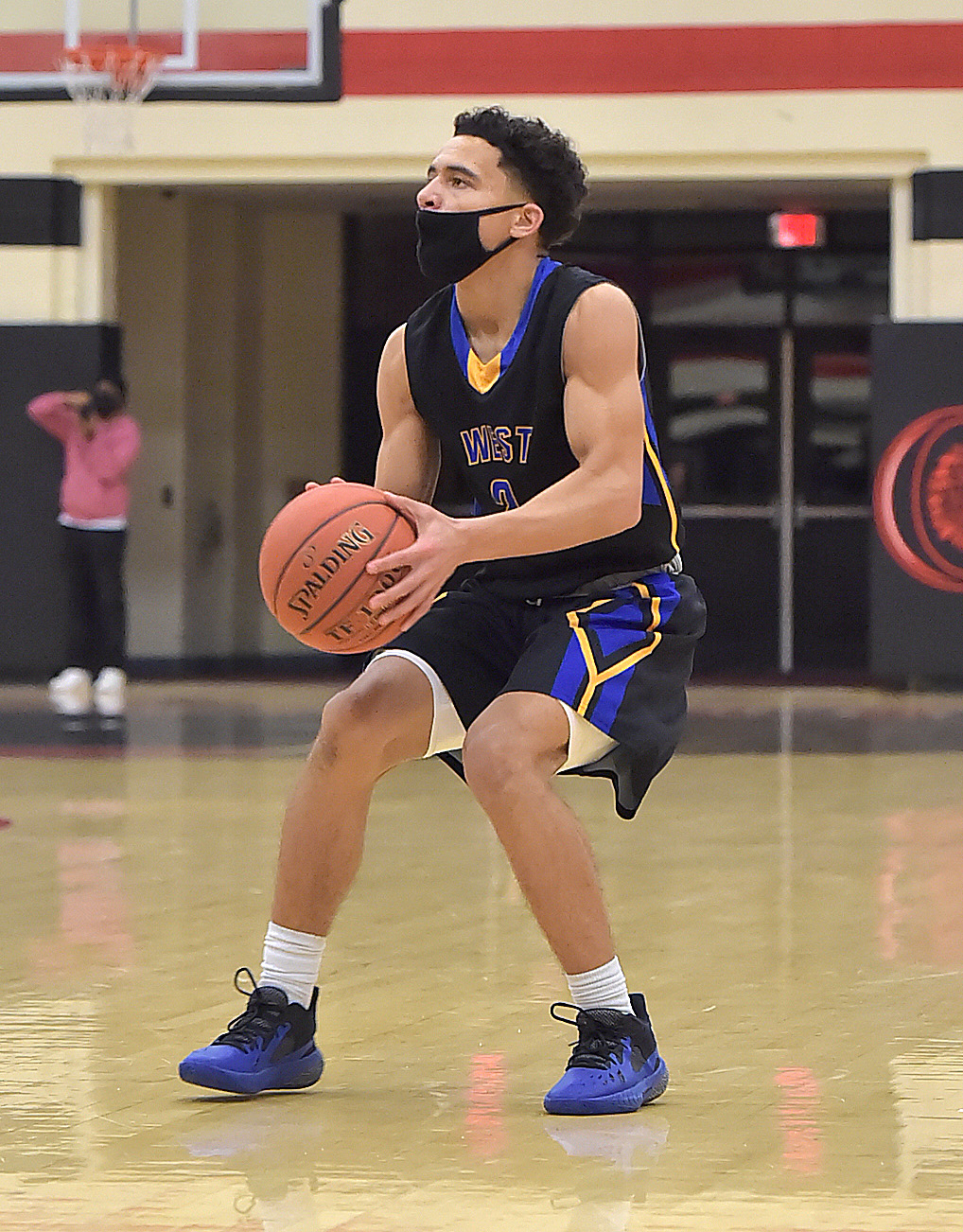 DOWNINGTOWN >> Coming into this weekend’s two-game set between the league-leading Bishop Shanahan boys basketball team and Downingtown West, the Eagles were undefeated and seem to have a firm grip on first place in the Ches-Mont League’s National Division race.

Monday night at Shanahan, visiting Downingtown West withstood a furious second half rally by the Eagles and held on for a very impressive, 67-59, Ches-Mont National Division win. The Whippets’ victory was the second for Downingtown West over Bishop Shanahan in three days.

Downingtown West (5-2 Ches-Mont, 5-2 overall) was led by sophomore Dylan Blair, who poured in 22 points, and 3-point shooting artist Sean Kaiser, who drained five treys and chipped in 21 points. Downingtown West had to also play the final 5:44 of the fourth quarter without 6-foot-9 center Jake Warren, who fouled out. Warren had just two points but pulled down 12 rebounds in his time on the floor.

“During that timeout, the coaches told us not to get down and that basketball is a game of runs,” Blair said. “And we knew we could bounce back. We ended the first half with a lot of energy and when they made their run we got that energy back.”

And the third quarter started like the Whippets were going to blow the Eagles out of the gym. Ryan Devers scored inside to make it a 33-24 lead, and when Kaiser drained his fourth three of the game, it was a 42-27 Downingtown West lead, and things seemed to be getting out of hand for the Eagles.

This seemed to wake Bishop Shanahan up as the Eagles went on a 7-0 run in the third quarter, largely on the scoring prowess of senior Zane Domsohn, who led Shanahan with 24 points, and who played brilliantly all night. But that only brought the Eagles within shouting distance, as Downingtown West had a 49-40 lead at the end of three quarters.

The Eagles started to turn up the defensive pressure in the fourth quarter, forcing six Whippet turnovers, and when Will O’Loughlin scored inside, Bishop Shanahan was within a point at 54-53 with 4:25 to play.

“They made their run at us and that is basketball,” Downingtown West coach Stu Ross said. “We like to think we are a resilient basketball team and we showed that tonight after they cut the lead to one.”

Devers drained a three for a 54-50 Downingtown West lead, and then the Eagles went cold from the field. Bishop Shanahan shot just two for 11 in the fourth quarter, and that, along with the foul shooting of Blair, spelled doom for the host Eagles. After Ryan Smyth hit two free throws with 2:12 to play and cut the Whippets’ lead to 55-52, West took over the game.

Blair made a beautiful no-look pass to Devers for a layup, and after an Eagles miss, Blair was fouled and he hit both from the charity stripe. Bishop Shanahan kept putting up shots, but they would not fall, and Blair finished the game nine-for-10 from the foul line. The win left the Whippets tied for first place in the Ches-Mont National with Bishop Shanahan.

“I am the point guard so I know the ball will be in my hands at the end of the game,” Blair said. “And I know free throw shooting is the difference between winning and losing games so it was nice to have a good night from the foul line tonight.’

Downingtown West has  won five games in a row after a season opening two-game losing streak.

“We need to work on things but I was proud of the effort tonight,” Ross said. “We are in a better place now as a team than we were a week ago but there is a long way to go.”