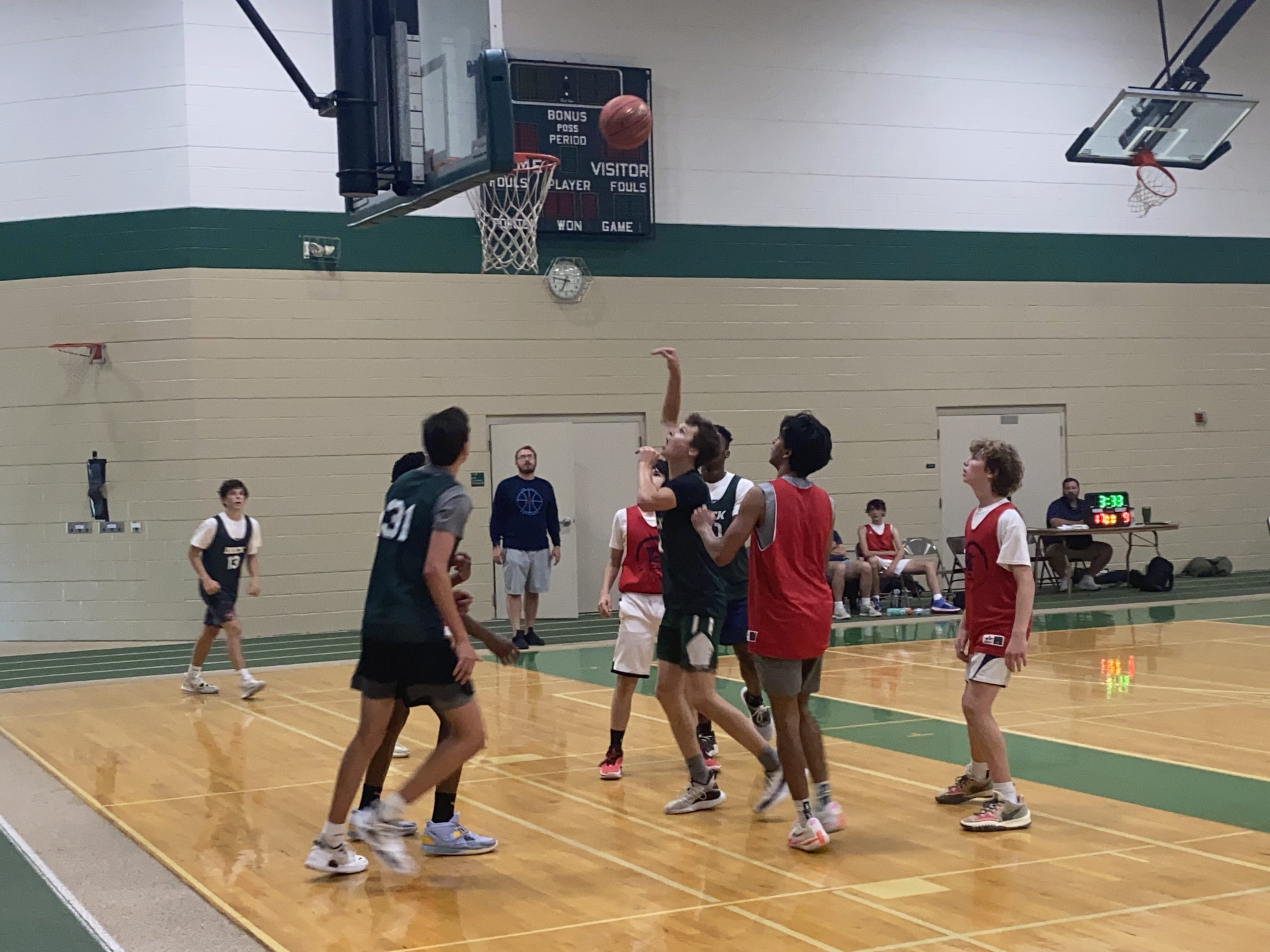 Earning a bigger role on the Pioneers boys basketball team requires putting in the effort in the offseason and Tuesday night that meant participating with a few other local sides in the Dock Summer League.

“I struggled last year with the confidence and I’m working on it,” Martin said. “And I’m getting better with my confidence in game.”

Tuesday featured a foursome of local programs in action – Dock, Central Bucks East, Hatboro-Horsham and Upper Moreland – while this season’s league consists of 16 total teams from four different leagues. After a break next week, play resumes July 11 and runs until July 26.

“It’s a great opportunity for us,” said Dock Mennonite coach Mike Fergus, who eclipsed 600 career victories last year. “It helps all the teams but I always feel like it helps us the most cause we’re playing 6A competition and we’re a [3A] school. And we compete with them, we held our own, we do fine. It really helps our program.”

For Martin, who provided depth in the backcourt headed last year by junior Nathan Lapp and senior Tomir Johnson, this summer is a chance to get in a full offseason with Dock after transferring into the school last fall.

“He can handle the ball, he’s starting to figure out how to run our offense better,” said Fergus of Martin. “It’s just a maturation process. People don’t realize that he transferred here, he started when school had started. He missed a whole summer last summer.”

Martin scored 18 points in a 96-51 win over Valley Forge Military Academy Feb. 1 and in the District 1/11-3A semifinals knocked down a 3-pointer in chipping in five points as the Pioneers outlasted Notre Dame-Green Pond in double overtime 78-75.

“Since we played as a team you felt like you made an impact,” Martin said “And it was not just one player doing everything on the team.”

The win over Notre Dame clinched Dock’s fourth PIAA tournament appearance in the last six seasons. Losses to Executive Education in the District 1/11 final then to eventual state champ Devon Prep in the PIAA-3A first round ended the Pioneers’ season at 20-6.

The Pioneers have kept busy beyond hosting their summer league, competing in a tournament at Penncrest and last weekend playing at Philly Live II.

“We’re coming together, we’re stringing some wins together – not that the wins are what we care about but we’re actually winning games,” Fergus said. “We’re playing a lot of kids and getting to run our sets. It’s fun, it’s good.”

Hatters’ Schlosser Keeping Busy >> A three-sport athlete at Hatboro-Horsham, it was not surprising to see rising senior Noah Schlosser competing in a fourth season with the Hatters boys hoops squad at Dock Tuesday.

“I like staying busy,” Schlosser said. “Keeps me out of the house so anything to keep me busy I like.”

Schlosser was an All-Suburban One League Liberty Division second-team goalkeeper for HH boys soccer last fall while this spring helped the Hatters baseball team win the Liberty title and reach the PIAA-6A playoffs.

In between, he earned All-SOL Liberty second team honors in basketball, which Schlosser said is the sport he is now primarily focusing on as he looks to play it on the college level. Schlosser said a few Division II and III programs have reached out to him.

“I have a Twitter account – a lot of coaches follow that which is huge, that’s where all the recruiting is now is on Twitter,” he said. “One kid I used to play basketball with a lot, his dad made an account for me and it’s really helped me out a lot, gotten a lot of looks from that.”

The Hatters had a tough 2021-2022 campaign in finishing 1-21 – their lone win coming against Quakertown Dec. 23 – and head into the upcoming season looking to end a 16-game losing streak.

“We’ve definitely improved I think,” Schlosser said. “We’re like 3-3 I’m pretty sure in this [Dock Summer League] which is already two more wins than we had in the regular season. But I think we’re coming together, everyone’s onboard this year. I think last year, we had a couple players that just kind of one bad apple ruins the whole batch, you know how it goes.

“But I think everyone’s just really in it – we’re like a family this year. So we should be hopefully [able to] contend for playoffs maybe but definitely feel a lot better this season.”

Schlosser said a focus from him this offseason has been to improve on his shooting.

“I feel like I can get to the basket a lot but teams start to pick up on that so I really got to find my shot which I’ve been trying to work on this summer for the most part,” he said. “But just doing that, having my guys when I drive and kick, want them to be ready to shoot cause that’s how we create a lot of points, we get a lot of opportunities from that.”