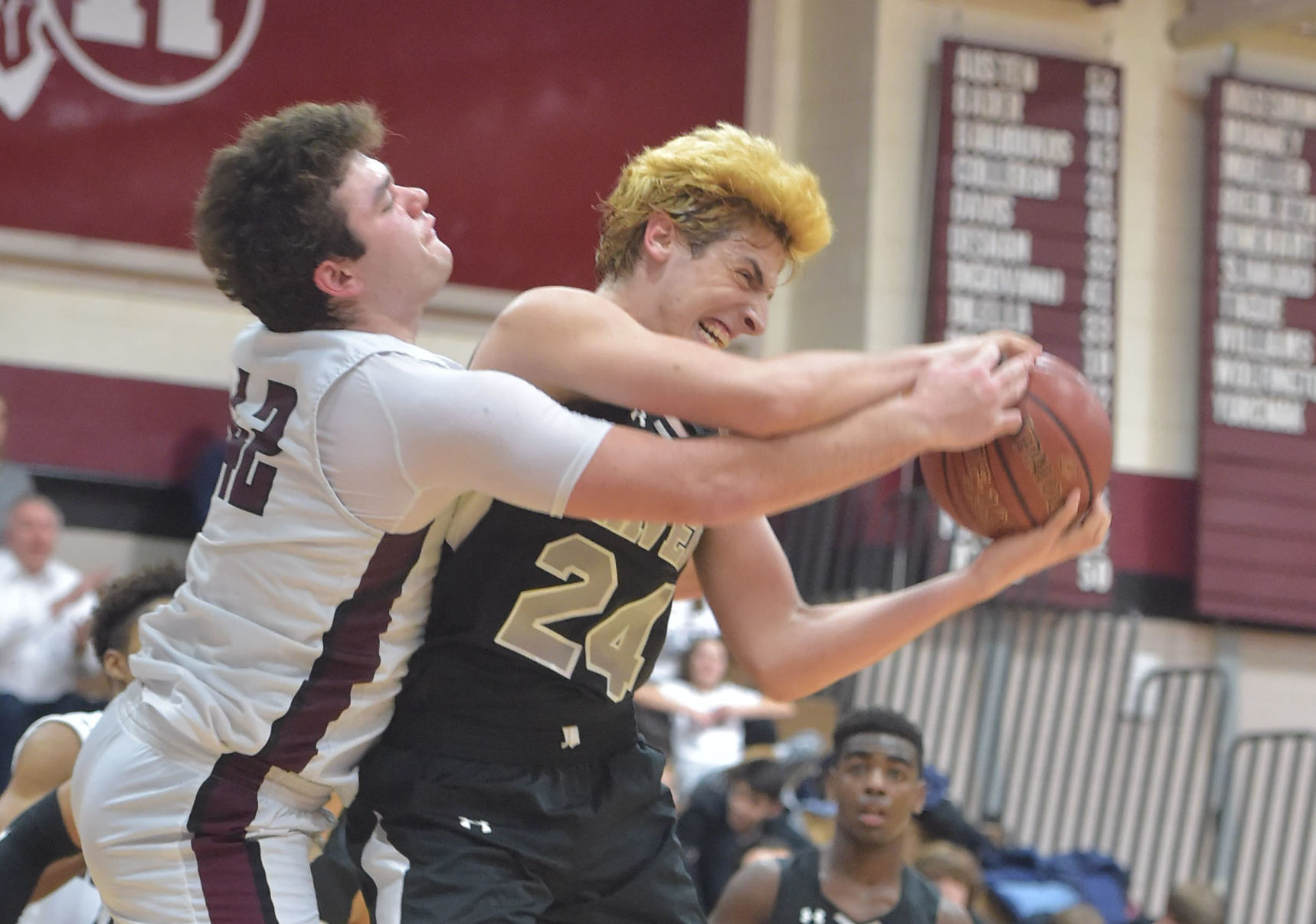 Radnor's Patrick Boujoukos, left, can't reach a rebound as Strath Haven's Robbie Guilday has possession in the fourth quarter. The Raiders hung on for a 48-46 victory. (Pete Bannan/MediaNews Group)

RADNOR — A year ago, the scoreboard at Radnor High School showed the same final score. But the teams involved could scarcely be in more different places a year on.

In the 2018-19 season finale, Radnor beat Strath Haven, 48-46, to clinch a District 1 Class 5A playoff berth. It paved the way for the Raiders to be dispatched by Unionville in the first round of the postseason and Haven to cap a moribund 3-19 season, leading to an offseason coaching change. Radnor’s Jahmir Dixon fires a shot against Strath Haven in the fourth quarter Thursday. The Raiders hung on for a 48-46 victory. (Pete Bannan/MediaNews Group)

Thursday night, Radnor wound up on top, again by a 48-46 margin. But where last year’s combatants combined for a mere 14 wins, the total this year stands at 29 and counting. Both are in position to host District 1 Class 5A playoff games. Both qualified for the first installment of the extended Central League playoffs, to start Saturday.

And both face incalculably brighter horizons now then they did a year ago.

“A lot (different), honestly,” Strath Haven’s Matt Shuler said. “Last year we were 3-19 and we had a lot of improving to do. It’s nice to be one of the top teams in the Central League and be competing this year.”

The matchup is the latest close-to-the-vest battle in the 40s waged by the teams this year. And it carried playoff intensity, fitting since these teams could meet a couple more times down the road.

Both teams clinched spots in the six-team Central League playoffs. Garnet Valley (14-2) and Lower Merion (12-4) are the top two seeds and receive byes. A win by Penncrest (11-5) granted it the third seed. Strath Haven (15-6, 9-7 Central) fell to the sixth seed, playing Saturday at 3:30 at Lower Merion.

Thursday’s affair was typically hard-nosed for a pre-playoff contest. The Raiders took the lead for good with an 11-0 run in the second quarter, a Josh Savadove 3-pointer sealing an eight-point edge at the break, 25-17.

Strath Haven threatened, getting within four early in the third before a 7-0 spurt by Radnor, then Haven nudged within three with a minute to play before Radnor did just enough at the line.

Jahmir Dixon the blow by with the right. He has 5 pts. Radnor leads Strath Haven, 9-7, after 1 quarter pic.twitter.com/gJY6iyk5At

The Raiders walked the line between slowing the game down too much and effectively killing clock. They attempted only 11 field goals in the second half and hit only one basket in the fourth quarter, a Lew Robinson leaner in the lane. Radnor managed not to squander the game at the line, going 9-for-16.

On a night where the usual suspects were quiet, Jahmir Dixon (nine points) stepped up to make a difference. Robinson scored 10 points, and Jack D’Entremont paired nine points with team-highs in rebounds (nine) and assists (three). But with the defense favoring those threats, Dixon found space to drive, scoring nine points.

“We knew that they were going to double-team Lew and Jack,” Dixon said. “So when I saw they were sliding to Lew and Jack’s side, it opened up holes for myself to attack and kick or go up for a layup.”

Haven’s offense had a similar ebb and flow. Luke Edwards scored 14 points, including seven in the third quarter to drag Haven back in touch. But Robinson, D’Entremont and Lane all took turns trying to shackle him, with Lane getting the final shift in the fourth quarter.

The result was just two shot attempts for the Panthers’ leading scorer. “We just had to stop 30 (Edwards) from shooting,” Lane said. “Make sure we stay with him and have him only take layups, no threes.”

Into the break stepped Matt Shuler, who scored 16 points. Thirteen of those came after halftime before Shuler fouled out.

“Shots weren’t falling, so coach says if shots aren’t falling, someone has to try to take over,” Shuler said. “So I tried the best I could to get open shots and create for my teammates.”

A tidy game that featured just seven total turnovers in the first three quarters descended into a press-addled chaos in the fourth, which featured 11 turnovers. That included Lane, after hitting two of four free throws late around a Justin Morris triple, stealing a late inbound pass, then coughing it up for a Robbie Guilday layup at the buzzer to set the final margin.

But those last two points were only for posterity, and a little symmetry from last year.

“Four years, I’ve been waiting for this night,” Lane said. “I’m glad it finally came. And I’m glad we played well and got the W.”

Marple Newtown 87, Harriton 81 >> Mike Tansey had 10 of his career-high 33 points in overtime as the Tigers got a vital win for their playoff hopes.