District 1 Class 5A Boys Basketball championship: Womack, from way back, helps bring title back to Chester 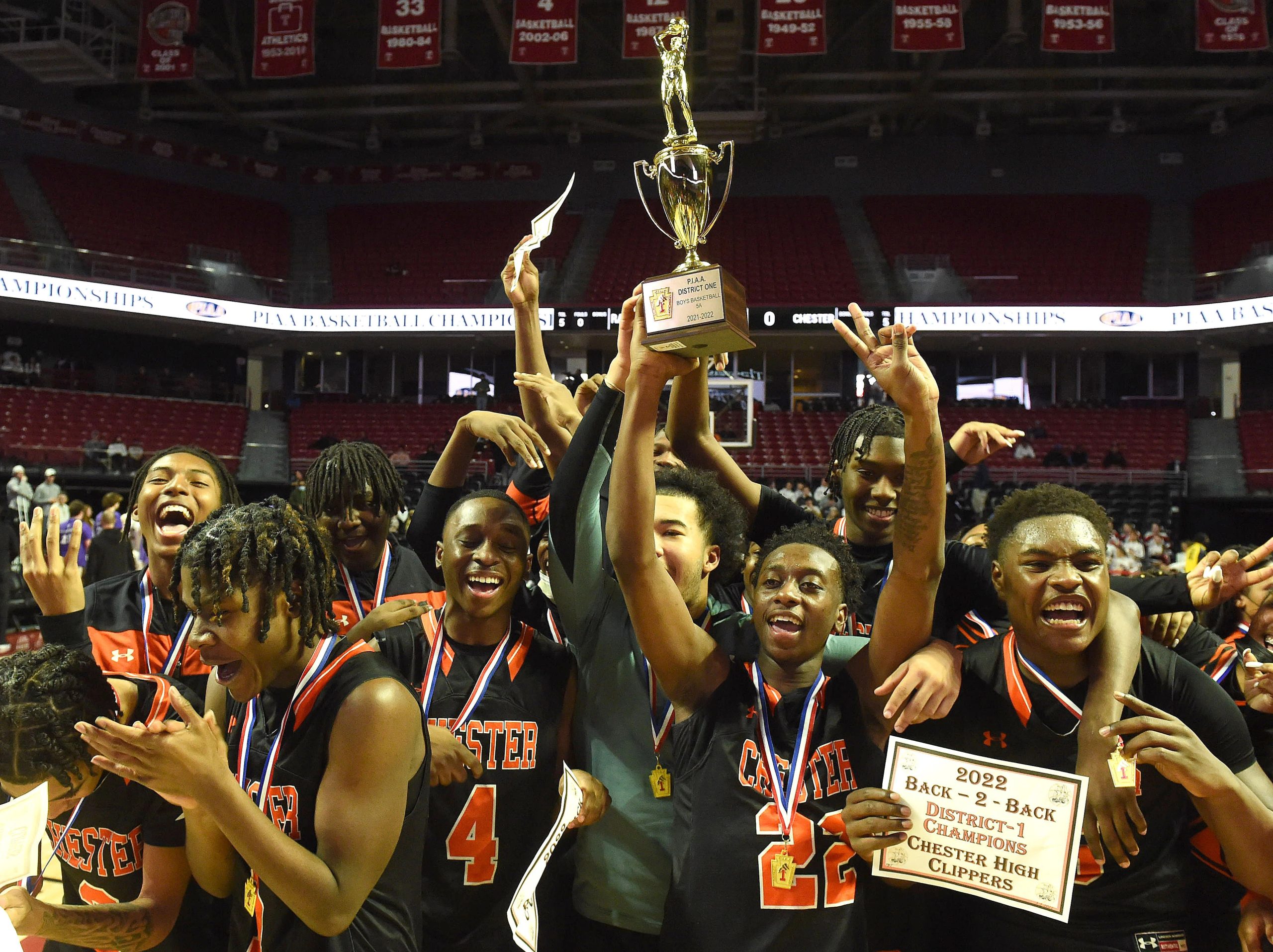 PHILADELPHIA — Chester High’s 25th District 1 basketball championship would not be a reality if not for the heroics of sophomore Kyree Womack. The 5-foot-5 guard drilled a miraculous 3-pointer as time ticked down in regulation Saturday to send the Class 5A championship game against Radnor into overtime.

The Clippers went on to defeat the Raptors, 66-65, for their second consecutive title. This one shall be known as the Kyree Womack game.

The diminutive Womack has an apt description of himself, consisting of three words, in his Twitter profile: “Heart over height.”

He showed just that Saturday afternoon at the Liacouras Center. When the Clippers needed a clutch basket, Womack didn’t disappoint. Chester coach Keith Taylor revealed what he was thinking as Womack lofted the 3-ball from the top of the circle.

What Taylor meant to say was “stuff,” right?

“You can put that in,” he said, laughing.

Womack’s shot hit the backboard and went in with 4.7 seconds left to force OT. In the extra session, the Clippers down a point, he dribbled inside, avoided three Radnor defenders, and made a one-handed runner to give Chester the lead with 7.1 seconds left. Taylor wisely called a timeout, forcing Radnor to go the length of the floor on its final possession. Jackson Hicke’s shot as time expired fell way short and the celebration was on for the Clippers.

Womack, who wasn’t in the starting lineup, produced a team-high 20 points on 7 of 15 shooting from the field. He converted all four of his free-throw attempts in the fourth quarter and OT.

“I knew I was going to make it,” Womack said of the 3-pointer, although he admitted he didn’t call backboard. “I’m a dog. Once I hit the overtime shot, I was telling my team, ‘I really want this win, we’ve got to get this win.'”

Taylor wasn’t surprised by Womack’s fearlessness and determination. As a freshman, Womack sank three foul shots with 10 seconds to play, giving the Clippers a 58-52 victory over Crestwood in the PIAA quarterfinal round last March.

Chester senior forward Isaiah Freeman, who transferred from Strath Haven after his sophomore year to reunite with his friends, supplied eight points, 11 rebounds, two assists and a pair of steals. The starting quarterback for the football team that advanced to the district playoffs for the first time in school history, Freeman has been a big part of some magical sports moments at The High over the last 12 months.

“It’s amazing, especially with a lot of young guys. There were a lot of people in the county and in the state who doubted us as a team. Our ranking was terrible, it was ridiculous,” Freeman said. “One of the things that kept us together, we’ve been playing together since the second grade, so we have chemistry. And with the young guys, a couple of them stepped up today. Kevin Rucker, Larenzo (Jerkins), Kyree Womack. … One of the key things was getting them to buy into what we were teaching them as seniors.”

The game itself was a classic. There were several lead changes late. At the end of the first half the Clippers held a 26-23 advantage thanks to a Jerkins buzzer-beater tip-in off a Freeman shot. Chester led by five twice in the third period, but Radnor kept coming. Hicke was outstanding as the junior forward scored 12 of this team’s 16 points in the third. He canned a 3-pointer early in the fourth to tie the score.

Radnor point guard Danny Rosenblum took over late in regulation. He made a lay up then got a quick steal off the Chester inbound pass and was fouled on the way to the hoop. He hit a free throw to give the Raptors a three-point edge with 50.5 on the clock.

Ultimately, foul shooting proved costly for Radnor. In the fourth quarter and overtime, the Raptors combined to miss 11 shots from the charity stripe. For the game, Radnor went 21 of 38 from the line.

Radnor played in its first district final since 1961. The Raptors will open the PIAA tournament against the fifth-place finisher from District 3.

“It was a great opportunity to compete against one of the best programs in the area,” coach Jamie Chadwin said. “We’re proud of that. We worked pretty darn hard to get here … and now we’ll have to try to regroup if we want to be one of the teams that plays on this level consistently. For us to be able to come back and close the book on this chapter, and start another chapter, that’s going to be our goal on a daily basis.”

Jerkins recorded 10 points and two blocks, while Qadir Lowrie posted nine points for the Clippers, who shot 26 of 57 from the floor and 8 of 11 at the foul line. Chester plays the seventh-place team from District 3 in the first round of the state playoffs.

“One of the things going forward for us,” Freeman said, “is pressure busts pipes and we can’t get our pipes burst.”

Lower Merion shows championship poise against Norristown to repeat as District 1 champion
De George: ‘Dog’ mentality returns home just in time to help win a game no one will forget