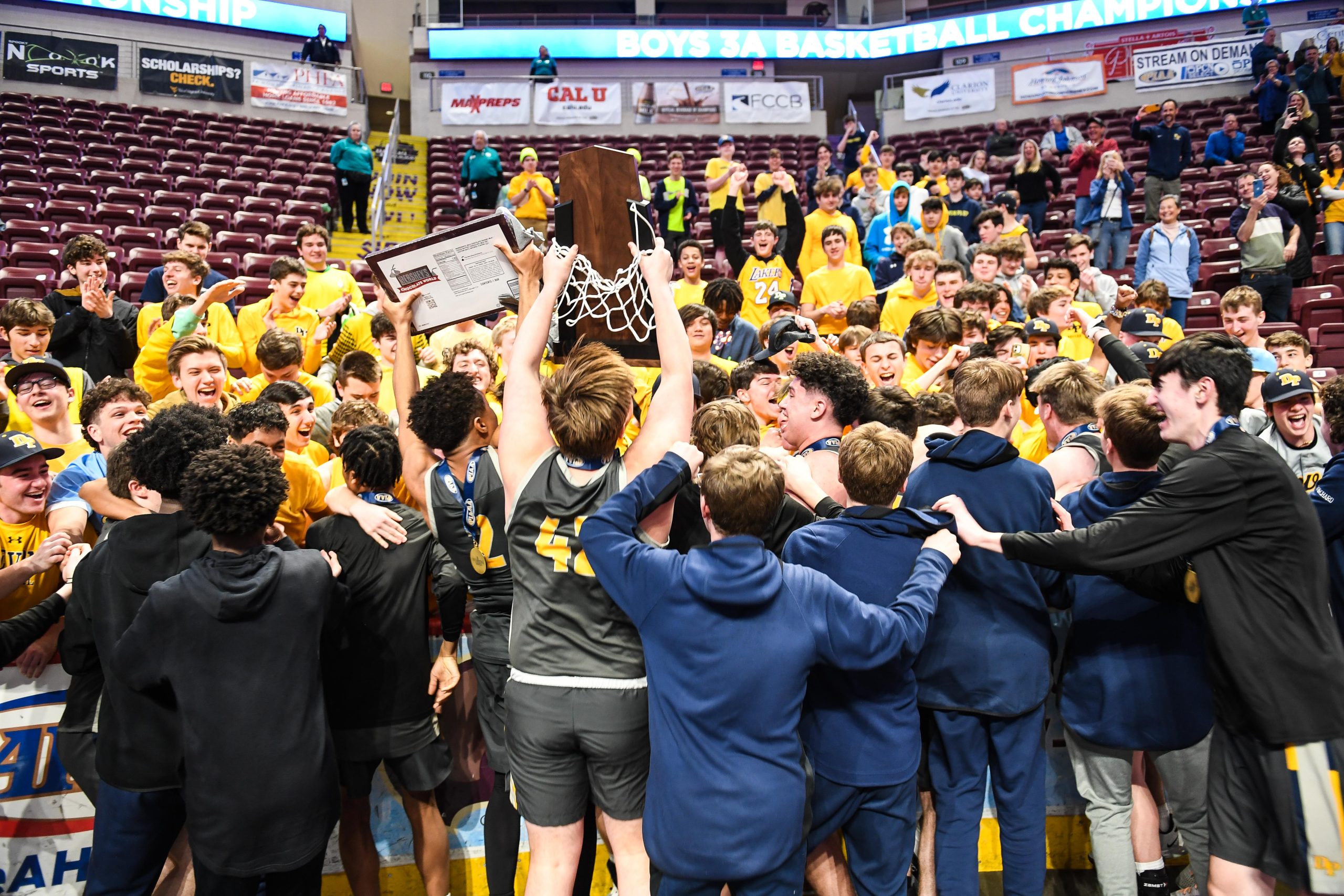 Hershey >> Just a few minutes after Devon Prep’s 76-58 win against Aliquippa in the PIAA 3A boys basketball state final Saturday, the victorious players carried their championship trophy over to the sizable section of yellow-clad Tide students in the Giant Center stands.
“We’re not a very big school, so for all those kids to show up today was a very big thing for us,” said Devon Prep junior guard Lucas Orchard, who led all scorers with 17 points. “They’re as much a part of our team as anyone, they’re always there at home games, away games. It’s a family here at Devon Prep.”
Devon Prep senior IV Pettit, who tallied 15 points and grabbed 7 rebounds against Aliquippa, said, “It was amazing to share that moment with our fans. It was an overwhelming feeling of excitement. They’re always with us at home games, at away games.”
“Seeing all those Devon Prep fans today was awesome,” said Devon Prep basketball head coach Jason Fisher. “The support from the students and the community this whole season has been unbelievable.”
And the Tide capped the 2021-22 season Saturday by capturing the school’s first PIAA basketball state title.
“When the [final] buzzer sounded, I felt relief and just an overwhelming feeling of excitement,” said a smiling Pettit.
Orchard added, “Winning this title for the first time is a dream come true.”
A 25-0 run by Devon Prep in the middle of the game helped make that dream possible. With the score tied 34-34 and a few minutes to go before halftime, the Tide exploded, finishing the first half on a 9-0 run then rolling to a 59-34 lead with 4:27 left in the third period.
“It [the 25-0 run] was our defense for sure,” said Devon Prep sophomore Ty Mishock, who contributed 13 points and four assists against Aliquippa. “We came out a little slow on defense early in the game, and we called a time out to talk about what we had to do to win. Coach Fisher called a 52 defense – double the ball on the first pass. They turned the ball over several times and we got easy looks at the basket.”
Fisher said, “The 52 defense is just a way to speed other teams up, and not allow them to be comfortable. In the first half, [Aliquippa] was getting comfortable, we were trying our zone defenses and a couple of their guys were making their shots, just catching [passes], looking and shooting. We had to force them to make shots where they were not comfortable.”
Devon Prep also relied on a balanced attack against Aliquippa. By the end of the third quarter, the Tides’ five starters – Orchard, Mishock, Pettit, senior Allen Cieslak and junior Jacen Holloway – each had scored in double figures.
Orchard said, “We all trust each other, and there’s not one player on our team you can key on, because then someone else will burn you. If I’m not scoring, IV or Allen or someone else will be scoring.”
Mishock added, “It’s been like that all season – the next man up mentality.”
By the end of the game, the Tide shot 26-for-50 from the field (10-for-21 from 3-point range).
Fisher said, “Our guys are not 7-foot basketball players, but they’re guys who can shoot, dribble and defend, and they don’t care who scores, if someone else [on Devon Prep] gets the points. They’re a really unselfish group that looks to get great shots every time and you saw that today.”
Devon Prep joined the Philadelphia Catholic League for the 2018-19 scholastic season, and Fisher believes the Tides’ move to that circuit sharpened their basketball skills.
“When we joined the Catholic League, it was to get better,” said Fisher. “And we set our goals in small increments – it wasn’t like we said, ‘We’re going to join the Catholic League to win a state championship.’ Our first two years in the Catholic League I think we had 4 wins. Playing in the Catholic League gets you ready every night, forces you to work differently and prepare differently – you need to be playing your best basketball every night, or you’ll get run out of the gym.”
While Fisher was speaking to reporters in the hallway outside the spirited Devon Prep locker room, the Tide players were celebrating their championship. Mishock reflected again on the Devon Prep student fans.
“I’m going to go over there and congratulate all of them,” said Mishock. “It’s an hour and a half drive [to Hershey], and they came all the way out here – I know all of our players appreciate them to the greatest extent.”