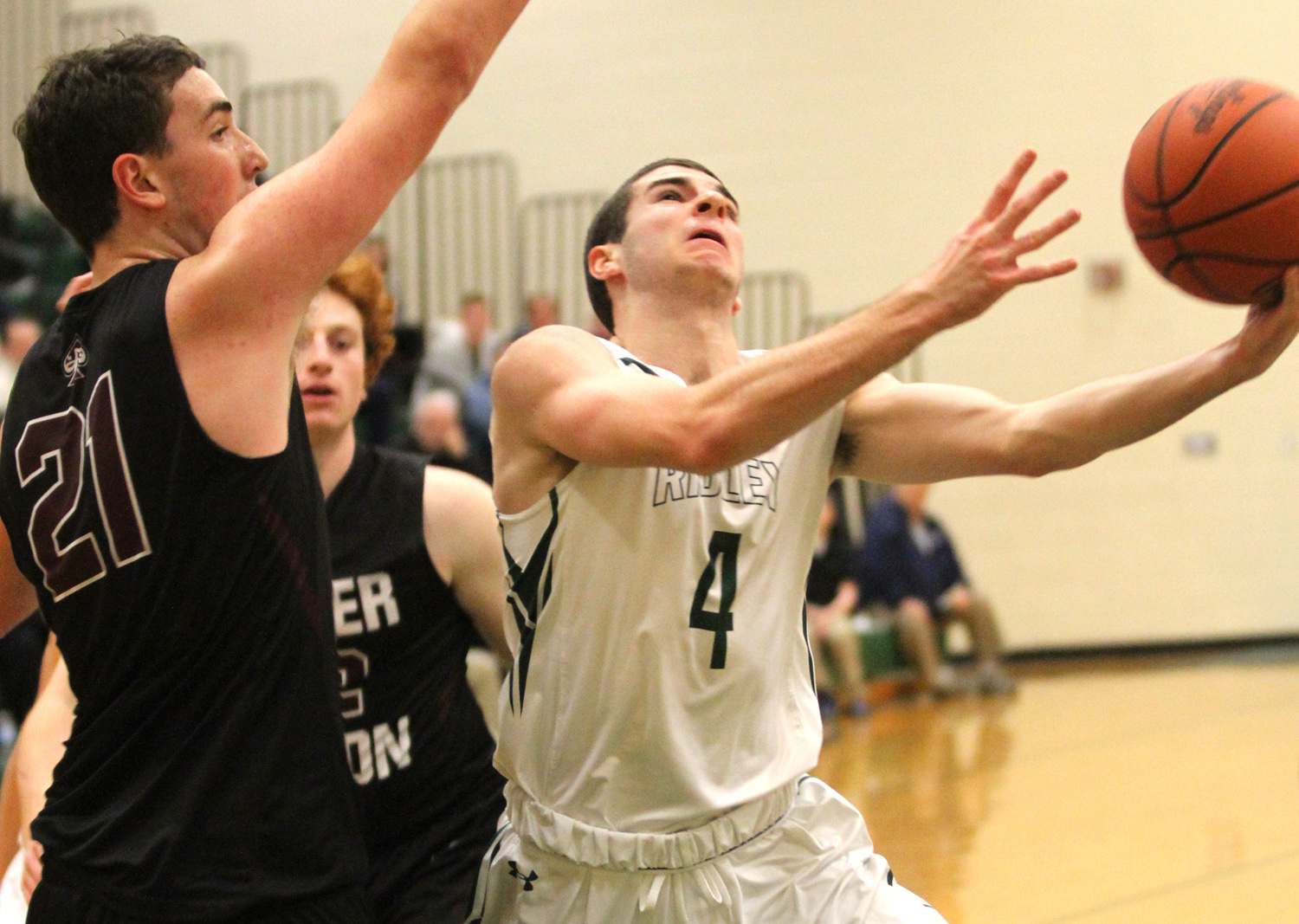 As the snowy winds whistled incessantly by this weekend, a thought occurred to a busy beatwriter squaring up his stat books: It’s possible that this season, Delco could lay claim to an illustrious and potentially unprecedented quadruple. Could Delco be the home of four league players of the year, as voted by league coaches?

The defending Central League player of the year (Brett Foster of Ridley) and Inter-Ac player of the year (Nick Alikakos of Episcopal Academy) have done little to indicate they might be usurped for those honors, and both have their teams contending for league titles. The Del Val player of the year is obviously from Delco, and I’ll withhold my thought of who it should be. Then there’s the Catholic League, where Ryan Daly of Archbishop Carroll is the leading scorer by a sizeable margin and Josh Sharkey isn’t bad either. Then again, the league coaches didn’t exactly pick the correct player last year. Given the scarcity of Haverford School’s hardwood success (which was until a decade ago Delco’s only Inter-Ac school) and the sheer heft of history in the Catholic League, could this be a first? We’ll see.

Anyway, the winterscape that afforded me such time to ponder also helped produce this Super 7. (Records through Jan. 25)

Ryan Daly , right, and Archbishop Carroll were denied by Vaughn Covington and Neumann-Goretti, but they remain atop the Super 7. (Times Staff/Robert J. Gurecki)

The Patriots can’t seem to banish that Neumann-Goretti albatross, and the differences between the Catholic League and PIAA Class AAA rivals were stark in Friday’s 98-75 Saints win in South Philly. NG plays so fast, so controlled and so efficiently with just a six- or seven-man rotation. They have five guys who can score at any time. Carroll has two, plus a rebounding-first post guy and a few occasionally hot wing shooters. Whether that’s enough to best Neumann-Goretti, their unquestioned measuring stick in the league and states, is hard to tell.

The Green Raiders aren’t just a great team; they have that knack for pulling out close games. Whether that’s Julian Wing hitting a late 3-pointer to pull out a 30-27 win over Penncrest or gutting out defensively to earn a 39-37 decision over a deceptively good Haverford team, the Green Raiders are 12-for-12 in the league. Surviving those granular tests don’t seem as impressive in isolation, but to flawlessly navigate each test and survive those ugly, slow-them-down games in the 30s is remarkable.

Look out for the Clippers, who have won nine of 10 and their first six league contests. The players have started settling into well-defined roles. Marquis Collins is the featured scorer, with Stanley Davis capable of doing the heavy lifting on certain nights. Jamar Sudan has stepped up in the lane absent consistent center production, Khaleeq Campbell is running the point steadily and there’s a passel of guards ready to shoot in the drive-and-kick game. Then there’s the defense: Only two of Chester’s six Del Val opponents have gotten out of the 40s.

The slip against Penn Charter appears to be an isolated incident, and EA can rectify that this week. Three straight league wins after three straight losses has EA at 3-1 in the Inter-Ac, even with Germantown Academy at the summit. Matt Woods and Conner Delaney are hitting just enough 3-pointers to bolster the low-post dominance of Nick Alikakos. They match up well with most of their league opponents thanks to Alikakos’ post presence. EA may well have what it takes to claim a title.

The Knights have a solid hold on second place in the Del Val after Penn Wood’s loss to Chichester. The game-changer for AP might be Khyree Temple, a Neumann-Goretti freshman transfer who has scored 59 points in three games. Any extra body allows the Knights to ratchet up pressure in the fullcourt press as more fouls to give. That he adds interior scoring to balance the Knights’ potent shooters is a major bonus.

Might as well echo most of what was said about Ridley. Haven has won nine straight, and after Lower Merion Tuesday, they have a relatively easy run to the finish (Harriton, Unionville, Marple Newtown, Radnor). The Panthers should grab a top-10 seed in districts. They’ve weathered the absence of Kyree Fuller, with Josh Singleton stepping seamlessly into the lineup and Cooper Driscoll providing quality bench minutes. The only concern is depth. They have five guys who score, full stop. If Alex Ischiropoulos is off one night or John Harrar is in foul trouble, can they establish a rhythm by other means?

I’d hoped that a comfortable win over Glen Mills Tuesday had sorted some things out. But then a buzzer-beater loss at home to Chichester sends them to a fifth defeat in seven outings. The pieces are there, just not always simultaneously. The good news is that Penn Wood hasn’t played its best basketball yet. The bad news is that their Districts seed may be so impacted that they face a sufficiently tough road that it may not matter.

Honorable Mention: Penncrest (9-9, treading water should be enough to get into districts, especially with AJ Taylor injured, and the finish to the season after Conestoga Tuesday is decidedly favorable); Garnet Valley (10-6, the Jags are four games over .500 and have, by my count, four winnable games on the horizon. Three straight double-figures games for Carl Tienabeso after the guard was stuck in single digits for six of the previous seven is a very good omen); Radnor (10-8, thankfully, injury setbacks to Vernon Harper and Mason Ressler were brief, putting the Raiders back on track with two straight wins. With Penncrest and Strath Haven waiting at the end of the season, they’d better not slip up against Springfield and Haverford); Bonner & Prendergast (9-8, inconsistency aside, the Friars score high on the gutsiness quotient, surviving four overtimes to beat Parkway Center City – which AP only edged by three – before being dragged to OT by La Salle in a 63-62 loss. The Explorers affair, against the presumptive second Catholic League AAAA qualifier, should allay any fear in the Friars’ PCL playoff draw); Chichester (10-6, the Eagles are the unofficial No. 8, winning three straight. We’ll see if they can knock off Academy Park Tuesday and, in the process, maybe unseat Penn Wood at No. 7?); Delco Christian (8-8, can the Knights get a break? Just when Jordan Parks and T.J. Tann get back into the swing of things, Devin Hill ends a 19-point first half against Church Farm with a hand injury. At some point, DC might field a full-strength team for more than a week.)