De George: ‘Dog’ mentality returns home just in time to help win a game no one will forget 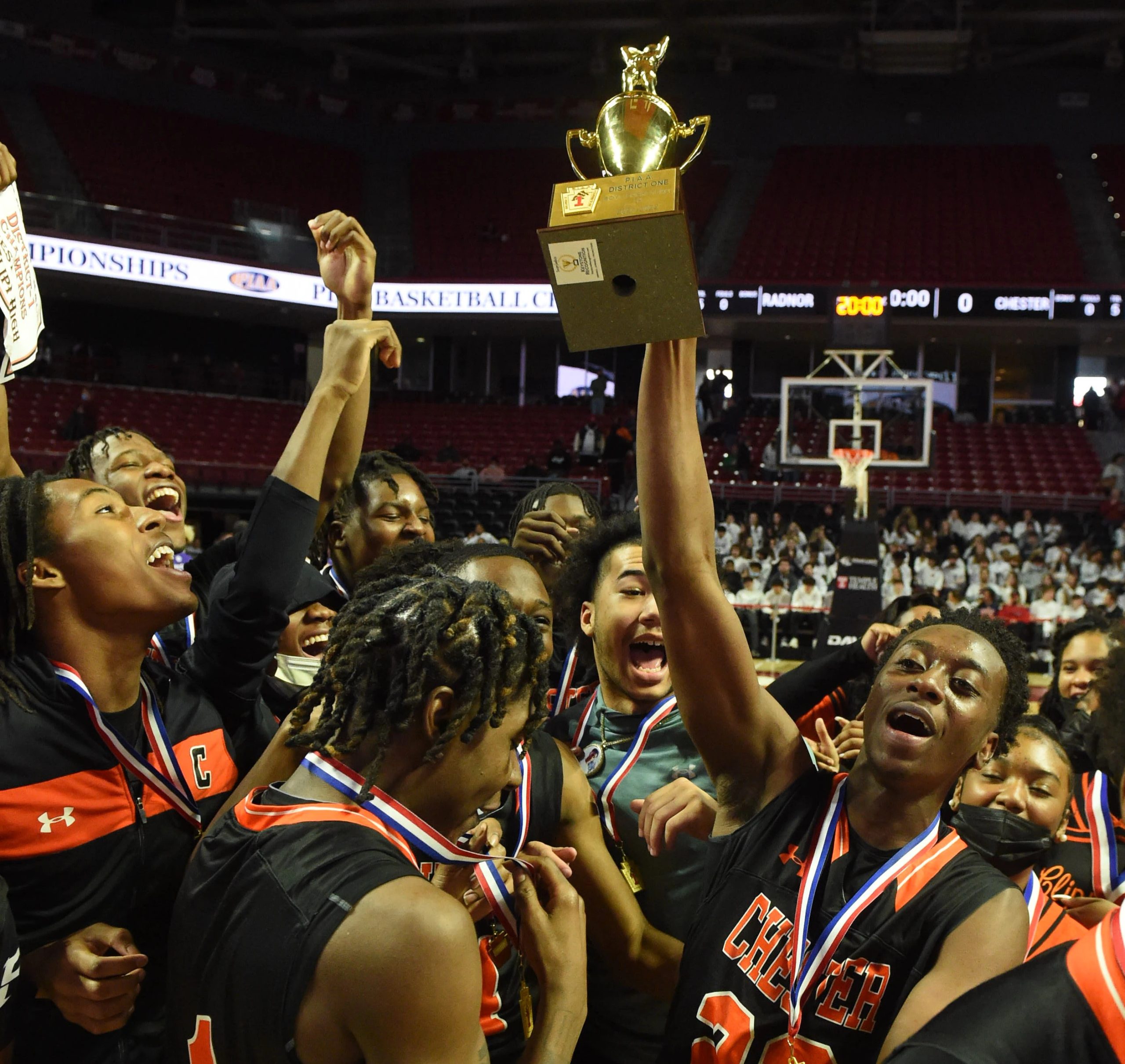 PHILADELPHIA — Kyree Womack received the inbounds pass with 11.1 seconds left Saturday afternoon, set his shoulders upcourt and knew exactly what he wanted to do. He jump-stopped 29 feet from the basket with the confidence of a player in the lane, coiled and let fly.

Three months ago, Womack didn’t know if he’d be in that position. The sophomore guard had contributed as a freshman to a District 1 title for Chester, but when an opportunity opened at Roman Catholic, he transferred to the Catholic League powerhouse.

That arrangement didn’t work out, though. So by the mid-semester break, Womack re-enrolled in Chester, waiting with his teammates through a four-week COVID-19 stoppage. As his mom wrangled the paperwork to finalize the switch and ensure postseason eligibility, Womack worked and hoped.

And when the moment was biggest Saturday, he rose to it. Womack hit the game-tying 3-pointer with 4.7 seconds left in regulation, then sunk the winner in overtime as No. 2 Chester outlasted No. 1 Radnor in a sensational District 1 Class 5A final, 66-65, at Temple University’s Liacouras Center.

What ultimately drew Womack back to Chester was the same lure that has powered the Clippers’ back-to-back crowns – what, for that matter, has fueled the historic season Radnor has assembled. Both teams share so much basketball DNA on the court, in how they attack and defend, with balance and a blend of athleticism and shooting that made them head-and-shoulders above the rest of the field.

But the foundation for each team is a sense of community that drives the on-court success.

Womack feels it acutely, in the pangs to come home from Roman and in the battle to be eligible to join his fellow Clippers at the season’s most important juncture.

“(My mom) snapped like, ‘Yo, you’ve really got to come out there and show out and play,’” Womack said. “I told her, I’m going to come out here and back my words. Actions speak louder than words, so I want to go out here and hit the big-time shot like I did last year, trying to go for back-to-back championships.”

Womack was massive for Chester (18-3). He scored 20 points, with 13 in the fourth quarter and overtime. He scored six of Chester’s eight points in overtime, the ball in his hands every trip down the court after Larenzo Jerkins opened OT with a bucket in the paint.

One of the coaches guiding Womack’s transition back to Chester knows from experience of the converse journey. Shep Garner grew up in Chester but plied his trade at Roman Catholic, on his way to Penn State and an NBA D League stint. Not until his playing days ended has he been able to etch his name into the Chester High proper history books.

So when Womack returned from Roman, Garner was more qualified than most to offer pointers, to help him understand the pressure of being tapped for stardom so young and having to discern the best pattern to fulfill that promise.

“I just told the kid, ‘Welcome home; enjoy the people that love you, that support you. Your family and friends are here,’” Garner said. “It’s a little different when you’re doing it with your brothers that you grew up with and the city that you live in, the city that you come in.”

“We’ve been together since (age) seven, eight; this is nothing new,” senior guard Isaiah Freeman said of Womack. “We’re tight as brothers. I call his mom, ‘mom;’ he calls my mom, ‘mom.’ We’re brothers, and this is truly a family, so no matter if anybody goes, we’ll forever be a family.”

Radnor’s continuity is why it has compiled the program’s most successful season in decades, and it’s perhaps why Saturday’s affair proved to scintillating. A team that starts four juniors has been together since middle school, their high school goals crafted then. They’ve lived up to so many of them, making states for the first time since 2006 and reaching a Central League final.

Their execution Saturday was rooted in the same principles – of unequivocal trust, of higher-level understanding on the court, of a true love playing together.

Radnor can leave Temple regretting a 21-for-38 performance at the free-throw line. But little else in the way in which they went toe-to-toe with Chester was anything short of superb.

“Games like this, and just every game that we play, we’re playing for each other,” forward Charlie Thornton said. “We just want to fight till the end. That’s through this whole program, from freshman through varsity. Everyone’s here to play for each other and play their hearts out.”

There’s one more thread to pull, pertaining to Chester’s unique sense of solidarity. Freeman pointed it out on social media Saturday, when in his pregame Instagram devotional, he reposted the memorial of Edward “Ricky” Harmon Jr., shot and killed two years ago this week, and Ny’Ques Davis, gunned down at age 13 in the summer of 2020. Both, Freeman never forgets, should be on the court with them for triumphant moments like Saturday.

“Something that we harp on is that we do everything for the guys. We have two teammates that should be here,” Freeman said. “… Same thing for football, same thing for basketball: Two two-sport athletes that would be here, and it’s sad, and it’s sickening and it hurts that they’re not here with us. But he was with us going into overtime.

“When Kyree hit the shot to end the game, they were definitely both with us.”

When you lose a brother never to see him again, perspective shifts. Freeman, who was at Strath Haven in that 2019-20 season, knows this. It also means that having a teammate spend a couple of months at a school 20 miles up the road is no big deal.

If any of that, of Womack’s undeniable talent on the court or his place in this episode of Chester basketball history, adds any pressure to his slender shoulders, it’s only the way the guard wants it.

“I’m a dog. I want everything,” Womack said. “I want to be one of those kids that make it out of Chester.”

For Saturday, at least, his name will make it far out of Chester.