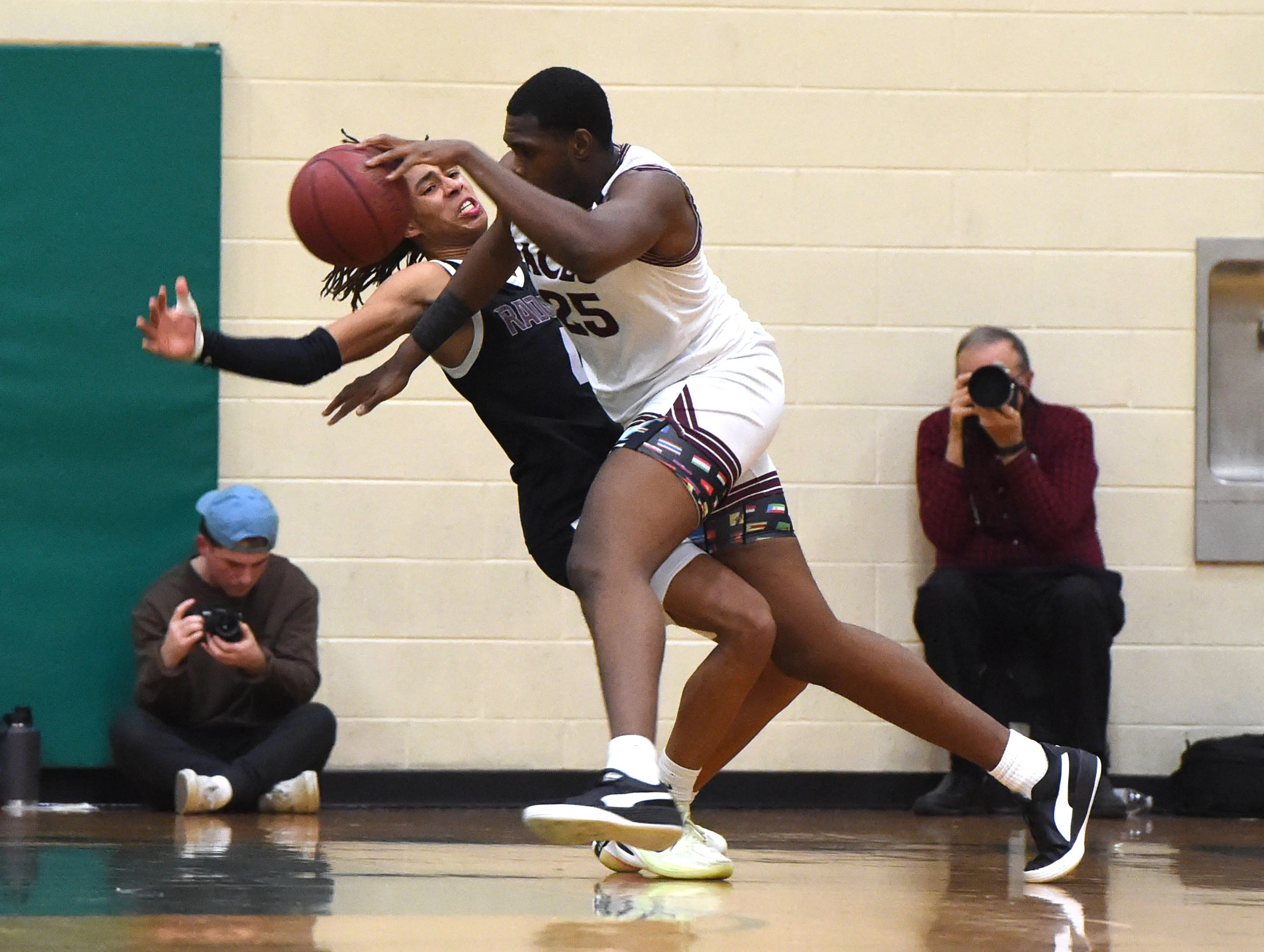 RIDLEY TWP. — The change in numbers felt right for Demetrius Lilley. He had come to love No. 35, chosen in part because it was one of the few in the Lower Merion storage closet that would fit his 6-10 frame. But when principal Sean Hughes died in a car accident in November, and a grieving Lower Merion community sought ways to memorialize their beloved principal, Lilley knew how he wanted to do that.

Instead of 35, the Penn State commit would don No. 14, for the 14 years that Hughes spent as principal, an on-court counterpoint to the “Hughes 14” warmups shirts and the shirseys coaches would sport on the sidelines.

Another change in number beckoned for Lilley Monday night, for a much less profound reason. But the sense of purpose behind his performance remained unflinching.

Wearing No. 25, the Aces blood jersey after a first-half cut on his wrist, Lilley scored 20 points and 17 rebounds, hauling top-seeded Lower Merion to a 59-49 win over a game Radnor in the Central League final at Ridley High School.

It didn’t matter if the 14 was on his back or not. That responsibility that the senior leader has shouldered all season was in his heart.

“I wore it just for him,” Lilley said. “I was going to play just for him this season. It’s been a very emotional season, but we use that motivation. Every game’s for him. Every huddle, we break out, we say, ‘Hughes.’ Every practice, every team lift, every stretch, we break out with, ‘Hughes.’”

Lower Merion’s basketball community has been no stranger to tragedy. Few programs have such an acute sense of their own history as the Aces, one they determinedly cultivate generation to generation, and that’s often been expressed sartorially. Whether it was the 2017 decision to protest the Muslim travel ban by the Trump administration with t-shirts that garnered national attention or last year’s collective mourning of the untimely death of its favorite son, Kobe Bryant, the Aces have embarked on long playoff campaigns carrying hefty emotional weights.

Even among those instances of adversity, the loss of Hughes hit close to home. For Lilley to literally wear the representation of that pain each night is an exemplary if natural extension of the leadership that he brings.

“That was a very mature and in some ways emotional thing to do,” coach Gregg Downer said.

In miniature, that’s how Lilley took charge Monday night. He was stymied through three quarters by a feisty Radnor defense. Though the second seed lack anyone above 6-4, the Raptors succeeded in frustrating Lilley around the hoop. They forced him into first-quarter foul trouble, with two infractions whistled in the game’s first six minutes. And though he had 10 points through three quarters, he was just 5-for-14 from the field, with the number change coming early after a cut opened on his arm from the harassment in the post.

“We knew they have shooters,” said Radnor forward Charlie Thornton, who did yeoman’s work on Lilley before fouling out. “… We didn’t want to leave them, so we were trying to play a little bit more 1-on-1 with him in the paint, try to get behind him. Offensively we were trying to make him foul us.”

“I think Radnor did an amazing job guarding me the whole game,” Lilley said. “They frustrated me a little bit. I just had to slow down my game, take a deep breath every time I get the ball and just go. Radnor definitely did a great job.”

The result was a tight game into the second half. Radnor trailed by six at the break, thanks to Cooper Mueller’s 3-pointer just before the horn. But they started on a 6-0 run out of the gates to tie it at 28. It was a one-possession affair as late as six minutes to play, at 40-37.

But that’s when Lilley took over. He’d already given the Aces breathing room in an offensive struggle of a third quarter, his offensive rebound of a missed free throw leading to a Peter Gribbin 3-pointer and a four-point possession at 28-all.

In the fourth, he took a pick-and-roll feed from Sam Brown to score off glass, then went off the bounce, then put back a missed shot by Jaylen Shippen.

That’s when things got emphatic, Lilley slamming home off a feed from Sam Wright on the wing to make it 47-39, then flushing when Gribbin, who had pocketed a steal, rewarded the big man for running the court to stretch the lead to 10 and finally break Radnor’s resolve.

Lilley has shone all year, even after such a devastating tragedy to being it. His role in all that, of a community healing and honoring Hughes’ memory on the court, was as clear on Monday night as ever.

“It just strengthens us,” Lilley said. “It makes us a better team, a closer team, a more motivated team. The Mamba mentality with Kobe, we use that for us to win. We stick together in those tough moments, and look at us, we’re Central League champions.”