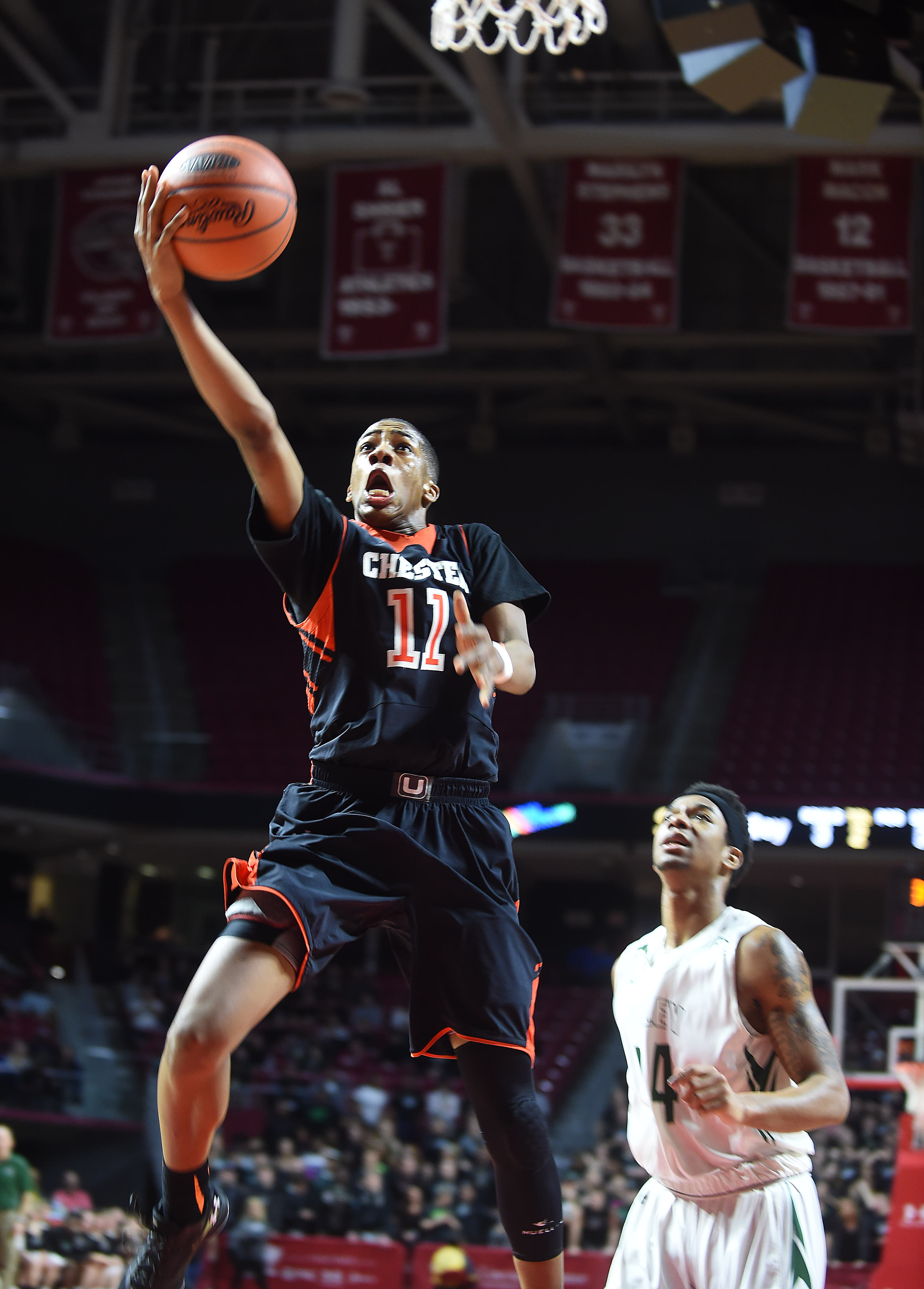 Without Khaleeq Campbell, who tore his ACL at Widener University Dec. 29, 2014, the Clippers were a rudderless ship, lacking a vocal leader and the true point guard to orchestrate an arsenal of talented but youthful talents needing on-court stability and direction.

Fast forward to the present — to a Chester team a day from renewing acquaintances with PW in Friday’s District One Class AAAA title game — and having Campbell sit the bench for foul trouble or a brief rest still isn’t viewed as ideal. But where last year Campbell’s absence invited chaos, this year, it’s just another sub in the 12-man rotation.

One major reason for that shift is Stanley Davis.

Davis’ ability was on full display Tuesday in No. 9 seed Chester’s 74-62 handling of No. 4 Ridley in the semifinals, powered by Davis’ 16 points and 10 rebounds. The game pivoted on a 10-4 run to finish the first half (part of a 19-6 spurt bridging the interval) that turned a tight game into one where Chester never trailed by fewer than eight. Davis fueled the distancing as Campbell sat with two fouls in a whistle-marred first stanza.

“Right now, he’s playing a little bit better with his head than with his heart, because he’s a Chester guy,” coach Larry Yarbray said. “He’ll give you 120 percent. He’s going all out, he wants to win so bad, he’s trying everything, and sometimes he tries to do it by himself. But he’s slowing down a little bit and making good decisions.”

Tuesday, that included some second-quarter drive-and-kick, displacing the Ridley defense for Deshawn Hinson to hit a pair of vital 3-pointers. In the third quarter, Davis furnished pinpoint passes to Hinson and Jamar Sudan in transition to expand Chester’s lead to its largest at 46-33.

Then there was Davis’ high-raising, one-handed slam off a lob from Campbell in the fourth at the Liacouras Center basket next to a Chester fan section whipped into a frenzy.

Davis, a rangy 6-foot-3 senior guard who verbally committed to Morgan State in January, is relatively new to the vagaries of the backcourt, his length plugging him into forward slots for most of his youth. Last year, when he averaged 4.5 points per game, he tended toward the reckless with the ball in his hands. For every measured drive to the hoop that resulted in an acrobatic layup, an out-of-control sortie for an offensive foul usually wasn’t far behind.

But Tuesday, Davis rode the line between aggressiveness and haste adroitly. He took few jump shots, instead contorting his lanky frame through and around defenders for lay-in or trips to the line. He was quick in attacking the Ridley defense but didn’t hurry the pace to error-inducing speeds.

“Play smart, just take our time,” Davis said. “Be aggressive but not too aggressive to get the reach-in call or the touchy fouls. We play smart on defense, we play smart on offense and we just finish the game strong.”

Yarbray emphasizes to Davis something that Campbell seems to innately master: Uncovering the mismatch. Where Campbell’s vision and shooting range compensates for the inherent limitations of his 5-foot-7 frame, Davis’ length and monstrous stride brings tremendous possibilities.

And that means on many occasions — barring the unlikelihood of an opponent having multiple guard-quick, 6-foot-something defenders — that he is the mismatch to exploit.

“Sometimes he’s got someone guarding him that can’t guard him, so we want to expose that because we know that if he turns the corner and makes a strong move, they can’t do anything but foul him,” Yarbray said. “He was getting by and making layups, he was continuing to put pressure on those guys.”

In true “Chester guy” fashion, Davis has produced his best basketball at the business end of the season. Since Marquis Collins went down with a shoulder injury, Davis has stepped up, averaging 11.0 points in the last eight games. For the season, his average has nudged up to 9.0 ppg.

Also representative of the Chester mantra, he’s just as focused on the defensive aspect of his game, an area of development powered by a chip on his slender shoulders.

“As I grew up, they say that I didn’t play defense like that, so I had to play defense because going to college, I’m going to be sticking guards,” he said. “So my first thing when I start the game is defense, and my offense will come.”

To see Yarbray administer a three-hour long practice session, you’d be hard-pressed to label him as laidback. But in this postseason run, as in past years’, he’s encouraged his players to relax. The message is to enjoy the ride and do what you can do: Play smart, team-oriented, high-level basketball, without pressing to do too much.

The flow of Davis’ game, epitomized by that alley-oop, indicates that he may be taking that message to heart more than anyone.

“Me, I’m a playmaker,” he said. “So I love to get my teammates involved. I love to score, too, so I’m a scoring point guard. And I just play my game.”