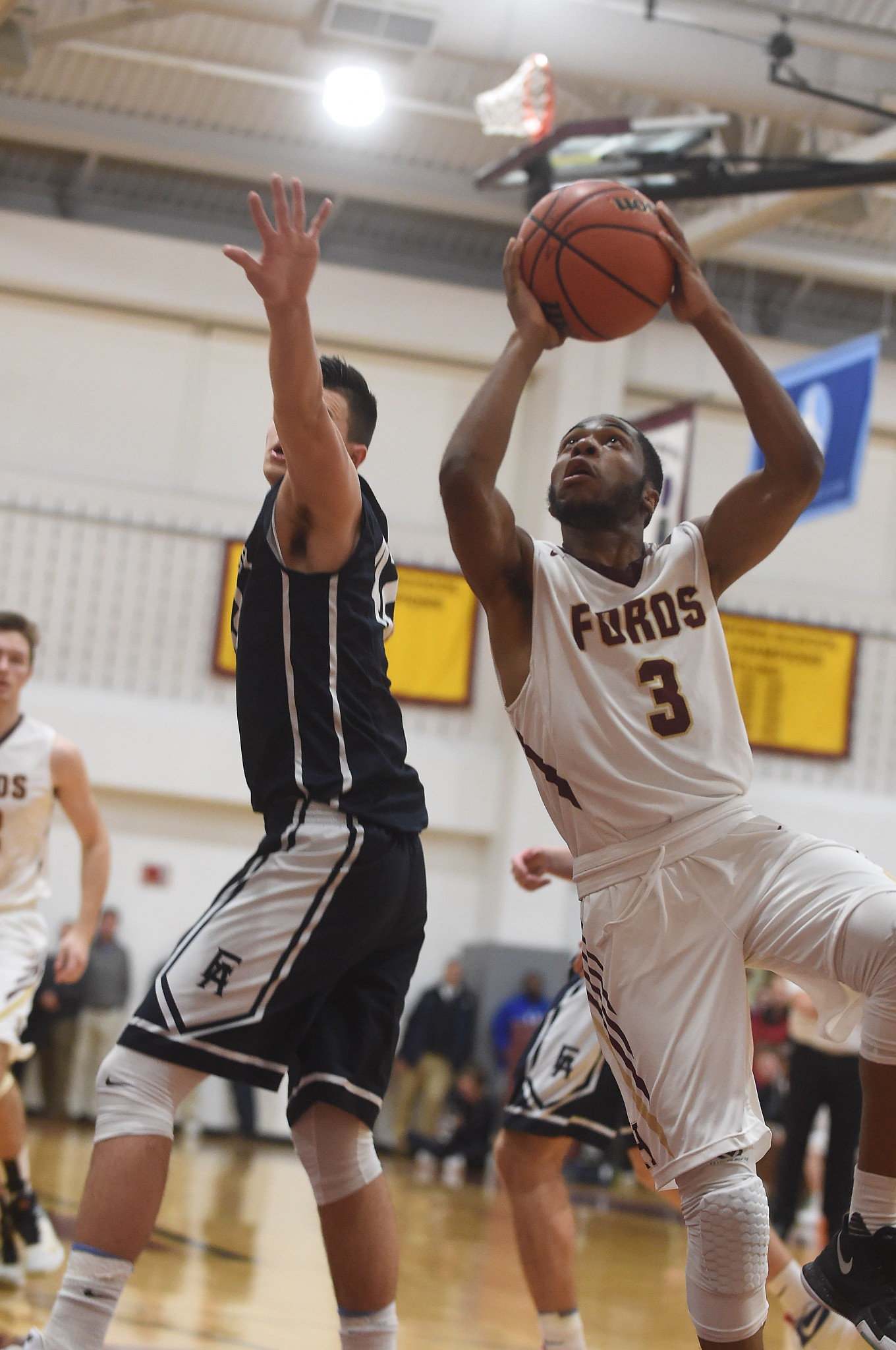 But on the macro scale, the encounter represented one of 13 prep sessions before the 10-game examination that is the Inter-Ac schedule, a rigorous set of problems that the Fords haven’t solved with distinction since 1999.

So being down four points after a woeful shooting first half … or stagnating against a 2-3 zone defense … or merely the banal challenge of bringing the intensity for an afternoon game (the likes of which dot the league slate) in a mostly empty gym, all those challenges assumed a dual meaning, with ramifications that extended well beyond 32 minutes.

The Fords used a steady second half, highlighted by a 17-for-18 fourth quarter at the free throw line, to outlast Phelps, 71-66. In the process, they further armed themselves for the Inter-Ac challenge ahead.

“That’s what they all are,” senior guard Kharon Randolph said. “All nonleague games are tests to prepare us for all those things that can happen and will happen in the Inter-Ac.”

The specific lessons shined through in the second half. Haverford School shot just 33 percent (9-for-27) from the field in the first, lulled to inaction by Phelps’ zone defense. It rectified that swiftly in the second half, launching a 6-0 run out of the gates with Randolph and Christian Ray getting to the basket, which in turn opened drive-and-kick lanes.

Ray scored 12 of his game-high 23 points in the third quarter, helping the Fords (5-1) whittle the deficit to two after three quarters and treading water while the shooters dialed in their range.

“We were playing zone and we weren’t covering the middle enough,” Phelps guard Manasseh Small said. “Christian Ray is a pretty good player, and they kept hitting him in the middle and it opened everything up for him to get opportunities, get fouls and get to the line.”

Randolph finally connected to start the fourth, as a slam by Carl Campbell extended the Phelps lead to its largest, 48-41. Randolph replied with consecutive 3-pointers, tacking on a free throw for a four-point play, to rally within 50-48.

“I feel like I was taking those shots all game,” said Randolph, who tallied 21 points. “First half, they weren’t falling. I kept taking them and they went in, in the second half. That was pretty much the difference.”

Randolph tied the game at 54 with a turnaround jumper off a Gavin Burke feed, then Burke canned a 3-pointer from the right wing off a Ray dime, putting the Fords up for good at 57-54. The sudden shooting fueled the game-turning 11-2 run.

Burke, who amassed 19 points and six assists, took control of the ball late, a perfect 8-for-8 from the line in the fourth. The Fords were flawless in their last 16 trips to the stripe, sucking the drama out of the final minutes.

“Definitely closing out games is a big focus,” Burke said. “Making foul shots and playing as hard of defense as we can. We’re really taking it game by game, trying to win each game at a time to get us prepared for the Inter-Ac.”

Randolph for 2. Tied at 54. pic.twitter.com/ADUCDzb18m

Burke, Randolph and Ray scored all 30 of the Fords’ fourth-quarter points. Jameer Nelson Jr. was Haverford’s next highest scorer on the afternoon with six points, six rebounds and three assists.

Phelps (5-7) battled in the fourth, with a late 3-point play from Zuri Peyton and a triple from Small allowing them to yo-yo between one and two possessions in the final minute. Small and Turkish forward Yagizhan Selcuk led the way with 14 points apiece. Peyton added 12 and Campbell 10 for Phelps.

In the race before the race, the Fords can add their names to league rivals like Malvern Prep and Episcopal Academy that have already gotten past Phelps. And with Thursday’s completion of another task on the early-season to-do list, they get a step closer to the business end of what they hope will be a memorable season.

“When we look back on it, that’s what we’re looking forward to most in games,” Randolph said. “We see in our nonleague games what we can do as a team, and we try to apply that to those 10 games because we know we’ll need it.”

Granberry is the eighth Chichester player to score 1,000 career points and the first since Rob Woods in 2005. He needed just three points coming into the game. Granberry is now four points from passing Allen Sack for seventh on Chi’s all-time scoring list and could soon pass both Barry Osborne (1,049) and Woods (1,050) to land in fifth.

Amiri Stewart added 15 points and nine assists, and Adam Sayed posted a double-double of 12 points and 12 rebounds for Chichester (3-1).