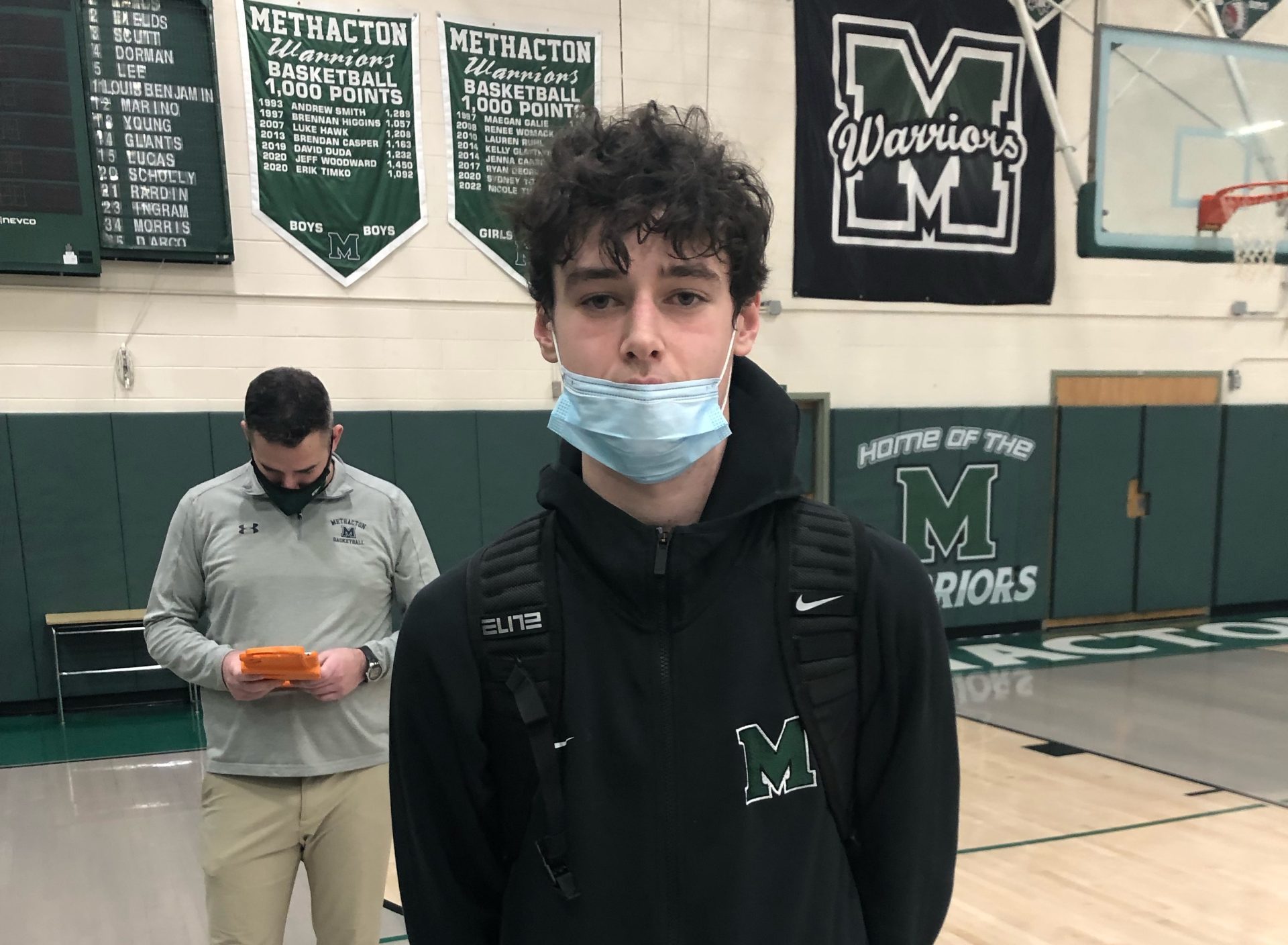 The Methacton junior didn’t do anything malicious, except keep raining in 3-pointer after 3-pointer, but it was enough to get more than a few people yelling to him among other things, stop losing him, stop collapsing off him and of course, stop letting him shoot. For Christian, it was just another day at the office where he again just did his job getting open and knocking down shots.

Thanks to a lights-out shooting display by Christian and some late defensive work by Cole Hargrove, the Warriors edged out the visiting Ghosts 55-50 in a very competitive game.

“They were sitting in a 2-3 zone, so when we got the ball in the middle, the perimeter was wide open,” Christian said. “That was basically the key to the game.”

Christian scorched Abington for 19 points, including a 5-of-7 display from long range as Methacton improved to 16-0 a night after grinding out an important PAC win over Spring-Ford. While Friday’s game was a slugfest, with the Warriors totaling just 31 points for the night, Saturday brought a much different slate of challenges as coach Pat Lockard noted with his team having 32 points by halftime.

BOYS BASKETBALL: @MHS_BoysBBall with great passing against the zone leading to @mattchristian35 drilling another three to open Q4 against Abington pic.twitter.com/0nRlwidSUk

The sharpshooting guard noted Spring-Ford also played a zone defense on Friday and the difference in the production was a byproduct of a better night shooting the ball. It also took him and his teammates a little while to wake up Saturday with Abington taking a 10-4 lead out of the gate and a 16-10 lead to the second quarter thanks to a Fhenyx Scutt buzzer-beater.

A putback by Connor Fields gave Abington a 21-16 lead and prompted a timeout from Lockard where he challenged his team. Brett Byrne found Christian for his first 3-pointer out of that stoppage and suddenly, the Warriors were awake.

“We just got into a rhythm, the energy was lacking in the first quarter and we got into it during that second quarter,” Christian said. “It was our third game in three days, that definitely played a part in it but we were able to find a rhythm.

“I think it goes a long way, we’re flexible, last night we struggled against a zone but today we handled it pretty well. If teams don’t want to guard us five-on-five, we can figure out how they’re going to defend us and how to score.”

BOYS BASKETBALL: @MHS_BoysBBall takes a 44-42 lead when @mattchristian35 catches all net on a three assisted by @colehargrove_ final seconds Q3 against Abington pic.twitter.com/w0JdfROkaa

The Christian three kicked off an 11-1 run, which the junior helped with another trey and by the end of the quarter, it was Methacton with the five-point lead instead at 32-27.

“We told him, in their zone, they can’t guard everybody,” Lockard said. “We needed Matt to step in and knock down some shots and not only was he shooting with confidence, he was moving well without the basketball.

“I started to notice last year, he was coming on toward the end of his sophomore season and breaking down the stats, on a per-minute basis, he was our leading offensive rebounder. He’s not the strongest or the fastest, but he knows where to be, where the ball is going to be and where the hole in the defense is going to be. It’s an innate natural ability to read the bend in the defense and the guys know if he’s open, he needs the basketball to let it fly for us.”

It was a good test on multiple levels not only for Methacton, but also Abington (7-6) which dropped its second straight after a four-game winning streak. Scutt had his best scoring game with a career-high 20 points, which Abington coach Charles Grasty said was exactly what the team needs from the shifty guard going forward.

BOYS BASKETBALL; @AbingtonBall Jimmy Marino hustles for the offensive board, setting up Fhenyx Scutt for the three to pull within 51-45 Q4 against Methacton pic.twitter.com/5y06WZSBMm

The District 1-6A runner-up last year, the Ghosts are still seeking some consistency this season but for the most part went toe-to-toe with the current top seed in the district.

“They were 15-0 for a reason, they play together and they’re unselfish, besides today, they’re fun to watch,” Grasty said. “We had our chances, a couple late rotations and they were able to get open. We’re still like everyone else, we’re trying to get healthy and the one thing we’re talking about is consistency.

“Right now, we’re too inconsistent and that’s a lack of varsity experience. I think we’ll put it together and this game will help us.”

Abington’s 6-foot-6 senior Derrius Lucas gave Hargrove a challenge with his ability to handle the ball out to the perimeter, drive and shoot while the Ghosts’ energetic forwards and guards presented some looks the Warriors haven’t seen a lot of this season. Lockard appreciated the opportunity it was for his team to adjust and liked the way it did after a much slower-paced game on Friday night.

Hargrove, who scored nine points but stuffed the rest of the box with 12 boards, three assists, six blocks and plenty of other altered shots, credited the coaches for making the right defensive adjustments throughout the game. When it came down to it and Abington cut the lead to three points with 2:38 left, it was still up to the players to execute and Hargrove did just that by coupling a few stellar defensive stands together in a row to maintain that lead.

“At halftime, with my matchup, the coaches said to force him left and I thought it was a great choice because I was really able to key in on that and stop him,” Hargrove said. “Our gap defense, help defense and even the weak side, it all has to be played up to perfection. Today showed us that we’re able to adapt well from a personal standpoint and from a coaching standpoint and being able to win different types of games is a great trait to have.”

Christian opened the third quarter with a three but was Abington, behind some solid shooting by Scutt, that owned the period and had a 42-39 lead with a minute left. Byrne got a putback to close within one, then Christian sank another triple with 2.8 left on the clock, drawing a few more groans from the Abington fans and sticking the home team to a 44-42 lead.

While Christian isn’t Methacton’s only shooter, he knows that his teammates are always going to be looking for him off a drive or, like Saturday, a zone defense happens to collapse into the lane. He doesn’t run a marathon like some other perimeter snipers do, but the junior has a knack for being in the right spot which he just chalked up to a lot of work behind the scenes with the rest of his team.

“I don’t get full of myself, I stay grinding every day basically,” Christian said. “I’m getting shots up every day so I can have that level of consistency. We work on things like teams collapsing on Cole and us communicating they’re going to double so we can build that awareness on the court of when the double comes, someone’s going to be open.”

In total, it was a 10-0 run spanning the end of the third into the fourth quarter for Methacton but back-to-back treys by Scutt got Abington within 51-48. The Ghosts wouldn’t get another point until a Fields stickback with 6.5 left thanks to Hargrove, who blocked two shots and used his size to force Abington into a couple very difficult shots while on the other end, Cam Chilson knocked down 4-of-4 at the line to seal up the win.

“I’m confident in us being able to adapt and fight back in games,” Hargrove said. “It’s one of the best aspects we have as a team.”

Abington’s postseason run last year was kicked off by its win over the Warriors at the end of the regular season, something Christian was well-aware of heading into Saturday’s tilt.

“All these teams, PJP beat us, PV, we felt like we owed all these teams a game, so it was great to be able to give them one back,” Christian said. “We had four games this week and came out of it 4-0, that’s the biggest thing for us right now.”