Chester’s leaders are there when it counts 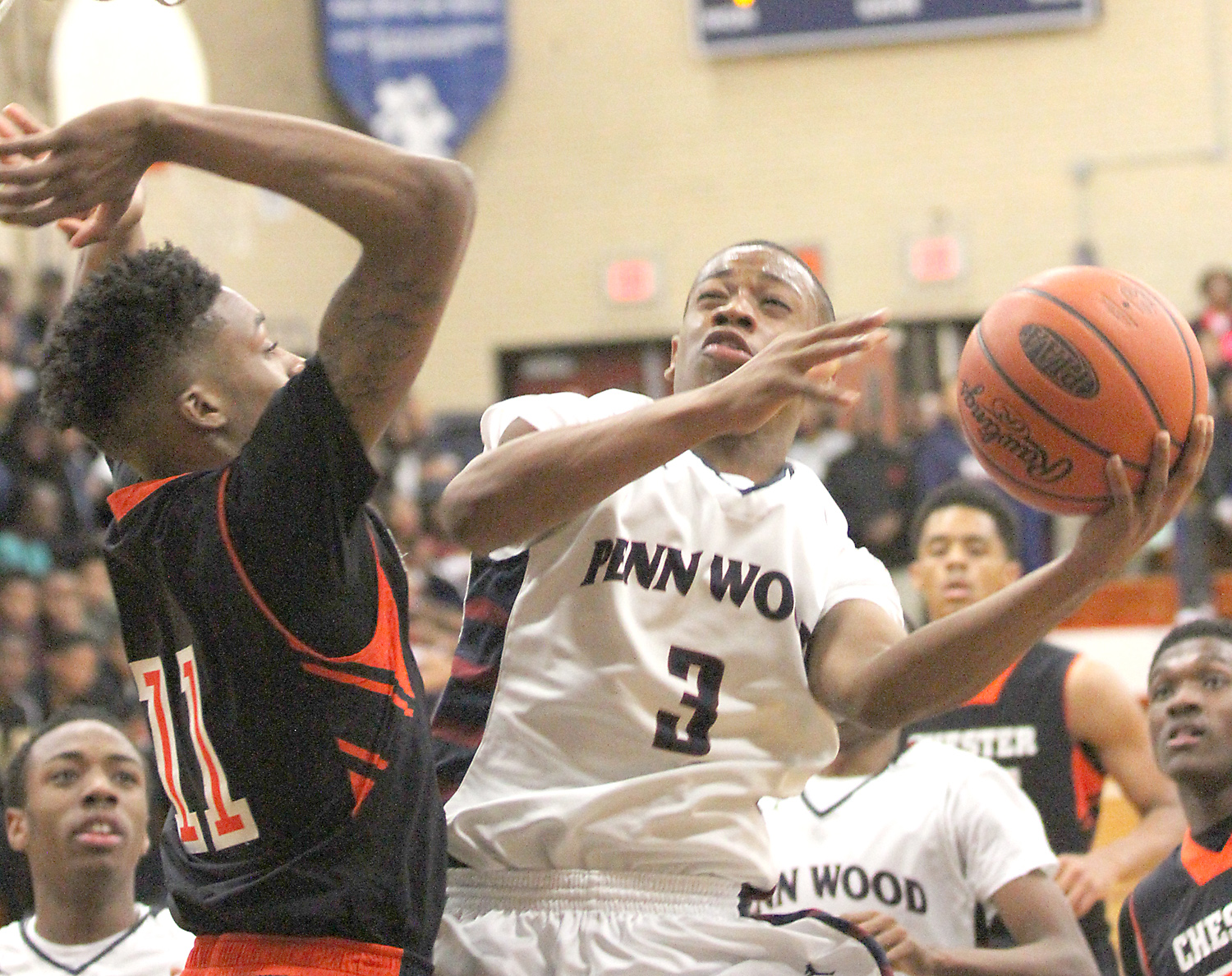 LANSDOWNE >> When the crowd gets rowdy towards the ends of games at Penn Wood High School’s gymnasium — fondly called the Shoe Box in some circles — the building takes on a claustrophobic feel. Patrons sit mere feet from the court on all sides. Their yells increase, the room grows deafening and opponents sweat out the final minutes.

Chester felt the phenomenon once again Thursday night as they squeaked out a 54-47 win over the rival Patriots. In the second quarter, the Clippers led by as many as 16. They held a 10-point advantage in the third. But Penn Wood refused to go away. With 1:58 on the clock, Jordan Johnson hit a turnaround bank shot to tie the game at 47 and the walls started to close in on the visitors.

“When you play your rival in your league, they’re not going to give up or quit by any means,” said Chester coach Larry Yarbray Sr. “Our guys got a little unfocused, got a little careless with the ball.”

Marquis Collins, for one, wasn’t intimidated. On the Clippers’ possession following Johnson’s bucket, the senior forward collected a wayward pass at the baseline. He coolly stroked a jumper to restore Chester’s lead.

“I’m a leader of this team,” said Collins who scored seven of his 13 points in the fourth quarter. “I wanted to find the best way to get my team the lead, go home with a ‘W.’”

Another senior, point guard Khaleeq Campbell, ensured they would. After a defensive stop, Campbell went to the line for a one-and-one. He sank both.

“I just had to knock them down to win because I missed one earlier,” Campbell said. “Ice the game, take us home.”

He added a layup as time expired for good measure. The Clippers could breathe a sigh of relief.

Or maybe a second. Chester could be accused of getting complacent following a dominant opening 12 minutes. The

Clippers raced out to an 18-6 lead after one and pushed it to 26-10 midway through the second. At that point, careless errors derailed the rout.

“I think we got a little comfortable on defense like we didn’t get into our rotations,” said Collins. “We made lazy passes on offense so they could get in our passing lanes.”

“It was little breakdowns on our side that helped them get back in the game,” added Campbell.

The Patriots also settled in after a frantic, somewhat reckless start. They made just one field goal in the first quarter and five in the half, while turning the ball over with abandon. It was the look of a team trying to make a lasting impression against their fiercest opponent.

“It was a little nervous energy early with the shots we were missing that we normally make,” said Penn Wood coach Clyde Jones. “The early jitters.”

With a little help from a lax Chester group, Kairi Jones drove the comeback. He knocked in two baskets in the second, then drilled two 3s in the third to swing the momentum to finish with a game-high 14.

“My coaching staff has been saying all along as he goes we go,” said coach Jones said of his junior point guard. “We play off his temperature.”

The Clippers (5-5, 2-0), on the other hand, continued their enigmatic trend. They showed glimpses of the stifling defense that defines their program, while showcasing enviable depth. Three players hit double-digits for Chester led by Collins’ 13. Campbell chipped in 10, while Stanley Davis poured in 11. And yet, there was that mid-game collapse.

“Our defense was playing so good that they weren’t getting transition buckets or wide open looks. But then they get some steals, they get some layups, they get some momentum, the crowd gets into it then our guys get a little tentative,” said Yarbray. “You can’t play to lose. You got to play to win. Stay in attack mode, stay aggressive. We have to learn from a game like this.”

Then he, like his team at the final buzzer, relaxed.

In other Del Val League games:

Academy Park 88, Chichester 62 >> Nakim Stokes had 32 points and Academy Park ran away with the game in the second half, blowing out Chichester for its seventh win of the season.

Wali Sabree added eight points in the effort. Sun Valley was down 10 at the half and never recovered. It is now 4-8 overall, 2-3 in the league.

Delco Christian 62, Valley Forge Military Academy 55 >> Devin Hill and Wyatt Harkins each had 18 points and Grant Fischer had 13 as the Knights earned the overtime victory.

Harkins’ 3-pointer tied the game with 17 seconds left in regulation. Delco Christian got the win in overtime with strong defense and timely free throws. It also had six players with two or more steals.

Jordan Parks returned to the court and dropped nine points.