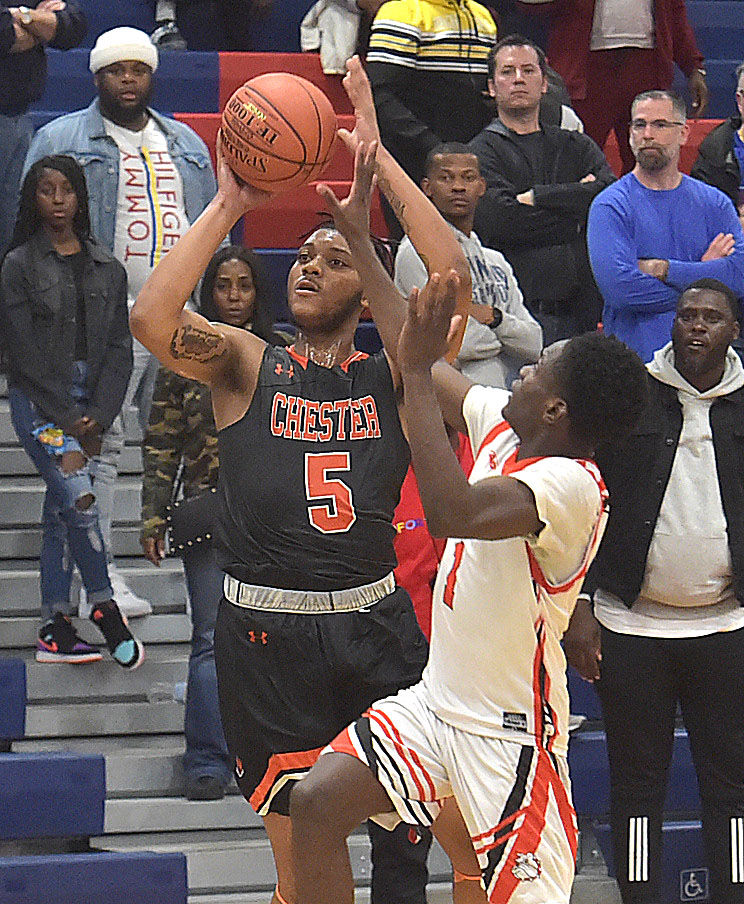 Chester's Zahmir Carroll hits the winning basket as time expires in a PIAA Class 6A playoff game in March. Simon Gratz's Edward Harris defended on the play. Carroll was one of three Clippers on the All-Del Val first team. (Pete Bannan/MediaNews Group)

Chester’s third straight boys basketball season without a loss in the Del Val League was duly rewarded in all-league voting, with the Clippers earning half of the first-team spots in the All-Del Val League team, released Thursday.

Watkins, the 2019-20 Daily Times Boys Basketball Player of the Year, averaged 19.9 points and 12.6 rebounds for the Clippers, who made the PIAA Class 6A quarterfinals before the season was cut short due to the coronavirus pandemic. Watkins was a second-team All-State.

Taylor averaged 14.4 points per game to earn All-Delco recognition. The Kutztown commit was a third-team All-State pick in Class 6A.

Carroll hit the game-winning shot at the buzzer in Chester’s comeback win over Simon Gratz in the second round of states. He averaged 9.5 points per game, third most on the team.

Also on the first team is the Penn Wood duo of Shamir Baynes and Jerry Flynn, which led the Patriots to the District 1 Class 5A final and a states berth. Baynes, a second-team All-Delco, was the Patriots’ most consistent scorer, the combo guard leading the way at 17.8 points per game. Flynn, a junior forward, added 10.8 points per game and was a regular double-double threat by the postseason for a 16-win squad. Flynn was a third-team All-Delco.

Rounding out the first team All-Del Val is Academy Park guard Derrick Northern. Despite missing seven games early in the season, Northern was one of AP’s most consistent performers, averaging 16.1 points per game.

Note: All-Del Val teams are selected by league coaches. The Daily Times has no input whatsoever in the process.