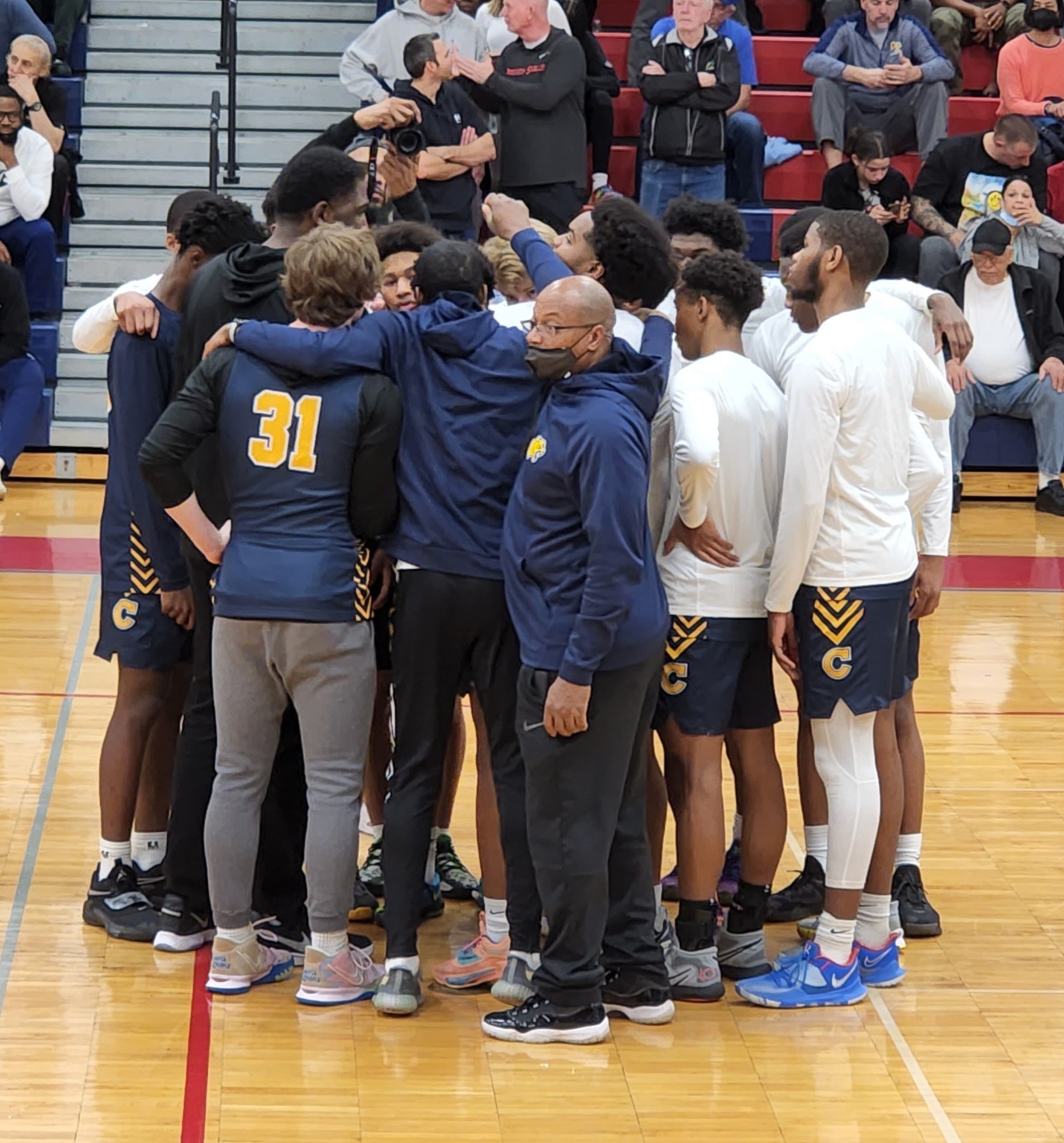 SPRINGFIELD >> The game was over.

Cheltenham trailed Roman Catholic by 17 points at halftime and the deficit grew to 22 less than 70 seconds into the third quarter.

Nobody told the Panthers it was over.

The Suburban One League Freedom Division champions scored 17 straight points and got within five three separate times in the second half of their PIAA-6A state quarterfinal against the Philadelphia Catholic League power, but that’s as close as they’d get.

Trailing 48-26 early in the third quarter, the (1-3) Panthers started chipping away at the deficit. Rasheem Dearry and Brandon Bush each hit a pair of free throws while Justin Savage made two baskets and Nasir Edens made one for a 10-0 spurt to get within 12, 48-36.

A carry call, the second of the game against the Panthers, wiped away a mid-range jumper before Dearry got his side within five and completed the 17-0 run, 48-43.

“I’m just very proud of the guys and how they fought,” Cheltenham coach Pat Fleury said. “We got down early. I think most people were thinking it wasn’t going to be too much of a game… but we fought back with a 17-0 run. We were able to make pushes, but I could’ve put them in better positions to overcome it and I didn’t. That’s something – I’ll take that, but I’m beyond proud of them. They are my family and we look forward to growing with them moving forward with whatever they do in their next stage of life and our younger guys just stay on them and continue to build.”

“Mentally, get stops on defense and stay in the game,” Savage added on the halftime message. “Don’t worry about our offensive mistakes, don’t let them transfer to defense.”

Xzayvier Brown ended the drought for (12-1) Roman with a layup before Toby Ojukwu split a pair of free throws to get the lead back to eight. Hutson responded with a three to end the third quarter and send the game to the fourth with a five-point difference, 51-46.

Roman’s Dan Skillings and Cheltenham’s Dearry traded baskets early in the fourth to make it 53-48, but that’s when the Cahillites (22-4) pulled away. Khalil Farmer made a layup and Skillings threw down a transition dunk after the Panthers missed four free throws to extend the lead to nine, 57-48, with five minutes to go.

Farmer added an old-fashion three-point play and Brown converted a layup to make it a 9-0 Roman run and 62-48 game.

Cheltenham responded with six straight points to get within eight with 1:45 left, but Roman went 9-for-10 from the free throw line down the stretch to close out the 75-62 win and advance to a semifinal matchup with (1-1) Lower Merion Saturday.

Dearry led Cheltenham with 17 points while Hutson added 15 and Savage 14.

The loss ends Cheltenham’s season with a 30-2 record. The Panthers won the SOL Tournament before reaching the District 1 semifinals and state quarterfinals.

“They’re 30-0 and I’m 0-2,” Fleury said. “This team is our first four-year class, so they obviously mean a lot – not that ’19 or anything like that didn’t mean the same, but I’ve watched them since they were in elementary schools this group. Obviously it’s not the ending that we want.

“My biggest thing is to bring the state championship home. That’s going to be our goal next year. It’s going to be our goal every year. For me, I’m super proud of them. They surpassed the school (wins) record for the boys… I’m super proud of them. I love them to death. Obviously I wanted to deliver them a different outcome, but everybody that’s been a part of our program I’m just so grateful – players, managers, everybody – they were just so amazing and I’m blessed to have them, know them and work with them.”

“It’s very hard (to see the season end) because of the relationships,” Savage said. “Not even on the court, just seeing our guys in the hallway during school and of course playing basketball against some of the best players like Dan Skillings, Khalil Farmer, anybody.”

Skillings, a Cincinatti signee, led Roman to an early lead. He scored 10 points of his 16 points and grabbed six rebounds in the first quarter while the Cahillites built a 25-10 advantage.

Farmer, a Hofstra commit, finished the first half with 13 of his game-high 23 points. He hit his first four three-point attempts in the first half – the final one at the end of a long possession to halt Cheltenham momentum and give Roman a 16-point lead, 33-17. The lead grew to 41-24 at halftime.

“We were very close we just weren’t converting in the first half,” Fleury said. “There were four or five layups that just spilled out for us. That cost us. When you have a good team like (Roman), that will cost you. For me, I just tried to harp on why we are here and what our goal is. They were able to come together (in the second half), get some stops and close it out with some rebounds, pushout and convert.”