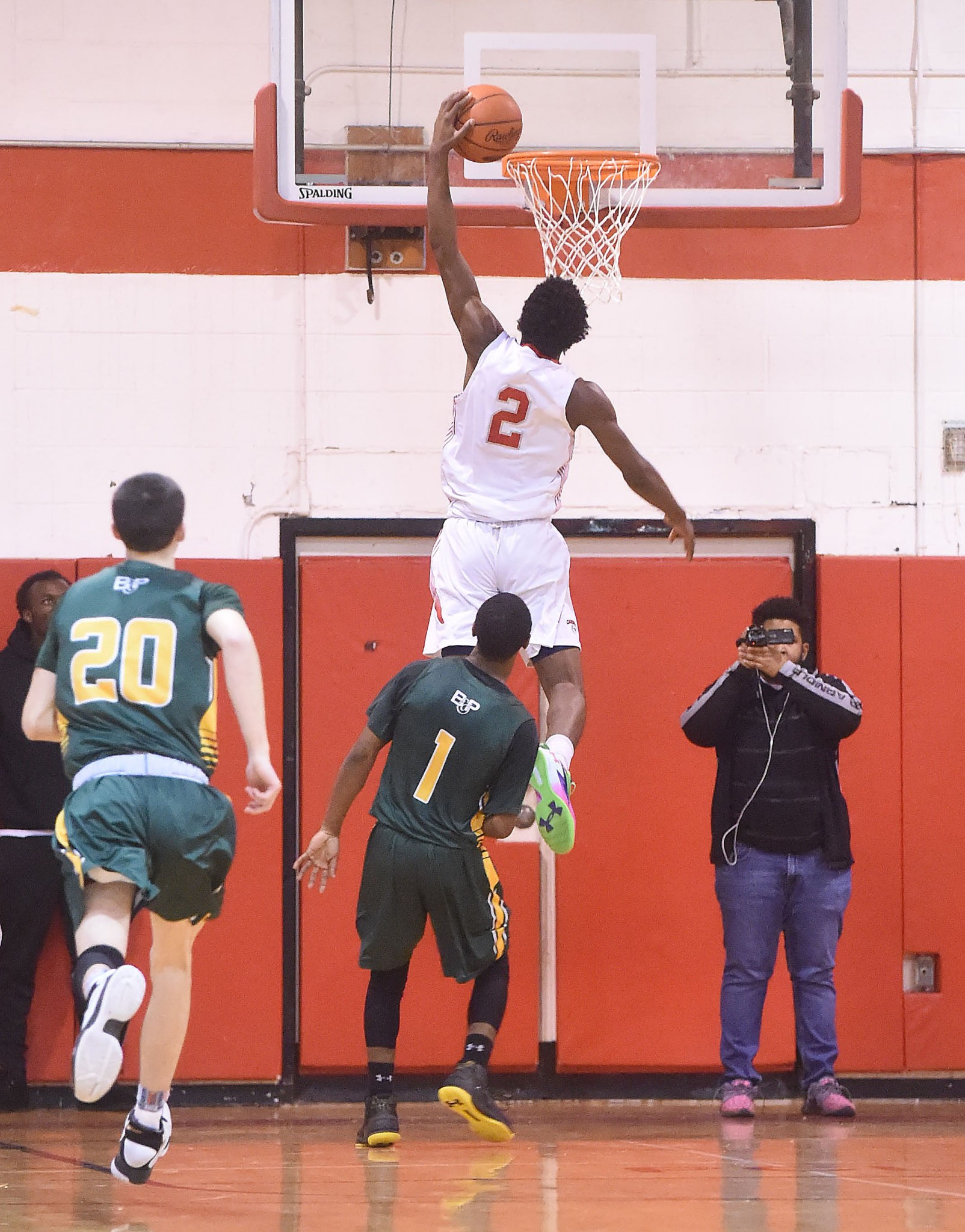 RADNOR >> Colin Daly didn’t give a second thought to his routine after missing the first of what he thought to be two free throws early in the fourth quarter Friday night.

Nonchalantly, with Daly assuming a second attempt was coming after he was hacked under the rim, the Archbishop Carroll senior guard calmly took two steps into the lane, grabbed the carom off back iron, unhindered by the players in the blocks. Instead of returning the ball to the ref, Daly casually flicked his wrists, sending the ball into the hoop.

About the time the shot swished home, everyone else on the court realized that Daly’s post-shot drill was with a live ball, and that he had cashed in a free offensive board and second-chance bucket offered by a Bonner & Prendergast team caught unaware.

“I think the announcer said two shots or I don’t know why I thought it was two shots,” Daly said. “So I was just doing a practice shot to make the second one, but it was one-and-one so it counted. No one boxed me out.”

It was that kind of night for the Patriots, a 73-50 demolition of their Delco rivals. For a team that had stomached plenty of hardship late in close games, a backlog of breaks avalanched Carroll’s way, and they gratefully accepted those bounces by pushing the tempo and blowing Bonner off the court before the end of the third quarter.

Daly scored a dozen, one of four seniors granted starts. But the star of the senior soiree was Khari Williams, marking his 18th birthday.

Williams scored 19 points, shooting 7-for-8 in the first three quarters. He was 5-for-5 at halftime, contributing three 3-pointers as the Patriots (14-7 overall, 6-6 Catholic League) shot 6-for-10 from beyond the arc in a lethal first half.

“It was unreal,” Williams said. “The key word is unreal. The student section was in it. It was a silent night, so when we scored the 10th point, that’s when they erupted. The atmosphere was just so warm, Carroll vs. Bonner, and I knew everyone had to play well and I had to bring my team’s intensity up.”

Friday’s game represented the complete performance against a quality opponent that had eluded Carroll. They’d come close — losing by two to St. Joseph’s Prep, three to Roman Catholic and at the buzzer to Father Judge — but Friday had the feel of a turning point for a young side approaching the postseason gauntlet.

“I think we all have been wanting just to play well as a team,” Williams said. “And when we get into that flow, everyone can feel it coming through each and every one of their bodies. And it’s like magic.”

“It’s a huge confidence booster because they’re talented,” Daly said. “They’ve had a couple of close losses like us, but they’re talented. It was a big game, we were both hyped. We were just all amped up, and we need to keep it rolling.”

Carroll so comprehensively dominated that it mattered little that leading scorer Justin Anderson didn’t hit a basket until the fourth quarter. The Patriots hit shots from the outside, orchestrated by another outstanding effort from freshman point guard A.J. Hoggard, the lone non-senior starter.

Archbishop Carroll’s Khari Williams celebrated his 18th birthday by scoring 19 points, including this drive to the basket in the first quarter, as the Patriots routed Bonner & Prendergast, 73-50, Friday night. (Digital First Media/Pete Bannan)

Devon Ferrero stepped outside to hit a pair of first-half 3-pointers on the way to eight points. Jimmy Lake, the deep-reserve thrust into the starting five for senior night, provided defensive energy. Jesse McPherson (10 points, six rebounds) and Keyon Butler (five points, seven boards) got the better of Bonner big man Ajiri Johnson in the low post, as the Nigerian tallied eight points and 11 boards before sitting much of the second half.

Bonner coach Jack Concannon called most of his starters to the bench for good midway through the third after a thoroughly ineffective showing. The Friars (14-7, 6-6) shot 38 percent from the field (19-for-50) and were outrebounded, 39-25. Only Tymir Cooper (10 points) got into double-figures from the usual rotation.

The only saving grace in a game whose spread climbed to 30 points in the fourth was a little window dressing, thanks to 12 points from reserve Donovan Rodriguez and a pair of 3s from Mike Perretta.

But this was a night for Carroll and its seniors. That was obvious in the final two minutes of the first half when McPherson and Williams flushed home dunks on consecutive possessions, then Daly followed with a running floater to beat the buzzer and send Carroll into the break up, 37-23.

“This is wonderful,” he said. “I had fun. That’s what I always try to do when I step on the court. Pop a little joke, say to everyone on the court to have fun.”

McPherson makes this dunk. Then Khari Williams adds a slam. 30-21 Carroll, 2:02 to half. pic.twitter.com/humWwLfvbH