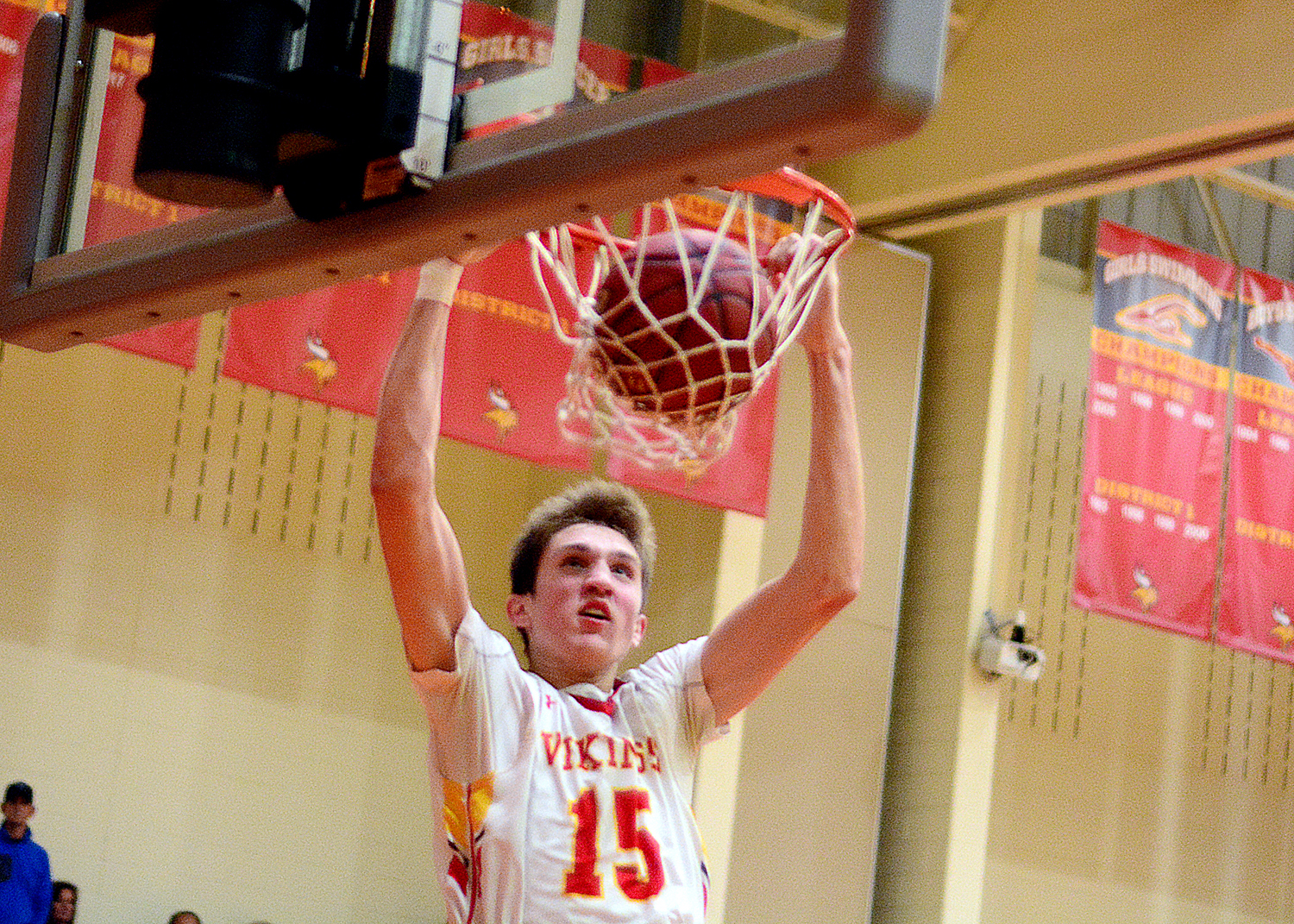 WEST GOSHEN—Top-seeded West Chester East jumped out to a big early lead against No. 8 Radnor, then cruised to a decisive 68-48 victory in front of a capacity home crowd Saturday in the quarterfinals of the District 1, Class 5A championships.

With the win, the Vikings (22-2) move on to the semi-finals against Rustin, a 62-51 winner over No. 4 Unionville, and guarantee themselves a return trip to the state tournament.

“I’m a senior, so for my last season, I really wanted to get another chance to play in states, so to know we’re going feels great,” said the Vikings’ Tym Richardson. “We also still have a shot at a District title, and after losing in the finals last year, it shows the kind of work we put in in the offseason to be in a position to get back to the finals. Winning one this year as a senior would be a great way to go out.”

Richardson had a great night, matching his jersey number with 21 points, 18 from the field and a perfect 3 for 3 from the line. But for Richardson, it was the job he and his teammates did on the other end that spelled the difference.

“We work hard on defense,” said Richardson. “We believe that defense turns our offense. We knew we had a size advantage, and we took advantage of it.”

Behind that defense, the Vikings opened the game on a 17-2 run, and led 19-7 at the break. They never looked back.

“Getting out to that kind of start is always a great thing,” said Vikings’ coach Tom Durant. “It lets the kids relax a little and just play. Our seniors really stepped up and brought it today. But it is all about the defense—like you said, it was only two points for most of the first quarter.”

The big story, in every meaning of the word “big” was the night from East’s 6’10’ senior forward Andrew Carr. Blocking shots and pulling down rebounds on one side of the court, Carr was even better on the other side, hitting just about every shot he took, from long range and short, little jumpers and bug dunks. By game’s end, Carr alone had nearly as many points as Radnor, finishing with 40, including a trio of threes, along with a 7 of 9 effort from the charity stripe.

“I’m just happy it came in a win, and there’s no way any of it happens without my teammates,” said Carr. “We got a lot of stops defensively, and that gave us the opportunities offensively. It’s huge to know that we are going back to states.”

It was the kind of performance coach Durant is almost accustomed to.

“Andrew can do it all,” said Durant. “They say you can’t coach size, but you can try to coach him to be able to use that size and make things happen. And he makes things happen. He can shoot outside, he can be a ball handler, and he can post up. And even when he is scoring a bunch, he is totally unselfish and willing to pass to a teammate. How many kids can you say that about?”

Lost in the shadow of the 61 point outburst from the two Vikings’ stars was a pretty solid night from Radnor. Once they go past that rough first quarter that saw them get in foul trouble in addition to the deficit, the Raiders put together a pretty solid night, cutting the lead to nine with a three pointer from Lew Robinson early in the third.

Robinson led the Raiders with 17 points in the game, and was one of three Radnor players to reach double digits in scoring, along with Jack d’Entremont and Danny Rosenblum, who each had 11.

“Getting in foul trouble the way we did early changed the way we played the game,” said Radnor coach Jamie Chadwin. “We really struggled to get going, and then the fouls on top of it– you just can’t do that against a team as good as West Chester East.”

Radnor isn’t done, however, and can still make their way into the state tournament, but now will have to do so the hard, way, coming back through the play back bracket.

“One of our goals was to make states, and that goal is still in our sights,” said Chadwin. “And this is the kind of team that can put this one behind us and get right back to working on our goals. We still have season left, and this group of kids has a unique toughness.”

The Vikings, meanwhile, will go up against a familiar foe and a crosstown rival.

“We know them, and they know us,” said Durant. “Hopefully it will be a fun game like last time. It is really good for the Ches-Mont as a league that we have so many teams still going with a shot to make states.”