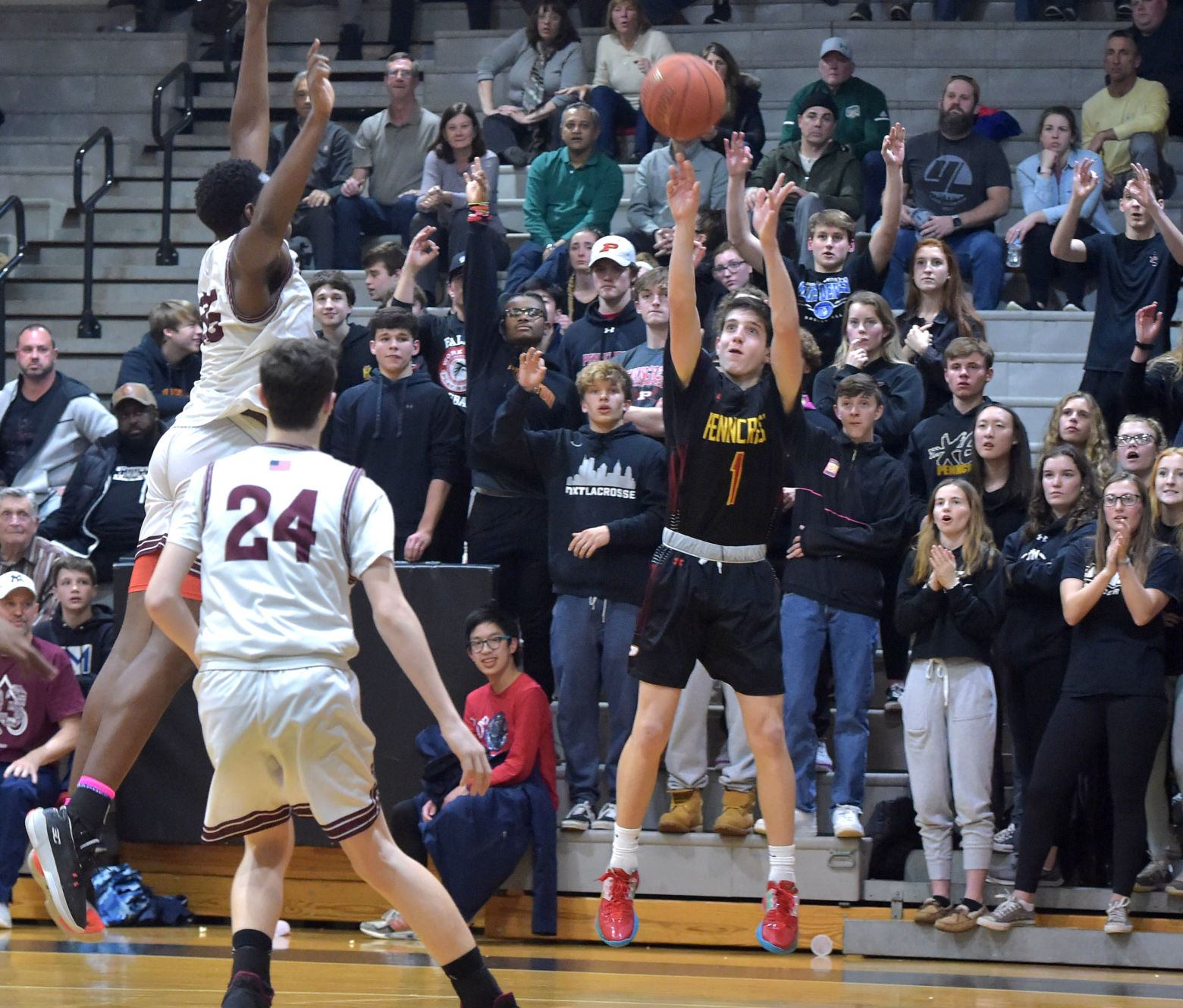 Penncrest's Ben Stanton hits a 3-pointer against the defense of Lower Merion in a game in 2020. (Pete Bannan/MediaNews Group)

Then again, it also didn’t include being down 10 points straight out of the gate, being without two starters by coach’s decision or fielding a lineup of four juniors, two in their first varsity starts. For all that didn’t go to plan, Cage’s smothering defense more than made up for it.

Cage was the key to Penncrest deploying a clinical box-and-1 defense to nullify Strath Haven’s Luke Edwards much of the way, helping the Lions rally for a 54-53 Central League win.

With Cage as his shadow, Edwards went from six points in the first quarter to three field-goal attempts in the final three frames combined. He tallied a team-high 17 points, including a 27-foot 3-pointer with 15 seconds left to tie the game at 53. But on balance, Cage succeeded in making it a 4-on-4 game, face-guarding Edwards out of it.

“When my name’s called to guard someone like him, that’s awesome,” the junior said. “He’s a great shooter, never stops moving. He’s like Klay Thompson. It took a lot of energy but I loved doing it.”

The box-and-1 was a late installment in practice the day before, a freshman modeling Edwards’ role, as a contingency. The 10-0 start 4:38 into the game made it a necessity.

Cage executed with aplomb. Edwards’ three shot attempts – a made 3-pointer off a screen, a missed putback on the glass and the late triple, with Ben Stanton switched to him – were miniscule given his usual impact. They came with Cage trailing him baseline to baseline, Edwards unable to shake him even as an in-bounder.

“I revert back to football because I’m a cornerback,” Cage said. “I’ve got to guard the receiver. I’m basically like, he’s a receiver and he can’t get the ball.”

Strath Haven’s offense never coped with the disruption. All eight Panthers who played scored, including seven in the first half. But they hit just two of their first 16 attempts from 3-point range and overall didn’t adapt.

Edwards still almost had his say, though the conclusion of a confusingly officiated affair was anticlimactic. Penncrest (4-5, 4-5) went up by as many as eight in the fourth. Haven (5-2, 5-2) wouldn’t go away, Edwards hitting four straight free throws with under a minute to play to get it to one possession.

After Luke Edwards’ three splashed home, Jack Edwards was called for a blocking foul 70 feet from his basket with 7.7 seconds left. Stanton hit the first free throw, then missed the second after a Haven timeout. Luke Edwards got the rebound, but a 3-pointer by Jaden Jauregui clanged out at the buzzer.

Stanton’s final free throw was fitting, since he had jolted the Lions to life. His 3-pointer 6:10 into the game was Penncrest’s first basket, on the way to just a 13-11 deficit after one quarter. At half, Penncrest had a 27-24 lead, with Stanton scoring 13 points, including a triple at the horn, and Saahir Lee 11.

“When Ben starts going, that gets us all going,” Lee said. “He’s the quiet one, but when he gets hyped, that’s when the whole team is hyped.”

Where Strath Haven failed to adjust, Lee had Penncrest’s offense constantly whirring through the gears. Denzel Atkinson-Boyer had two shot attempts in the first half. He had that many on the Lions’ first two trips of the third quarter. All eight of the Lions’ points in the frame came from Atkinson-Boyer, who tallied 12 points and eight rebounds.

“Even before the game, we were telling him, he’s the best center in the league. No one can guard him,” Lee said. “When he gets the ball, he has to go up. Sometimes he’s going to put his head down and think he’s doing bad, but we tell him, ‘next shot. Turn the page. Keep putting the ball up.’”

Edwards for 3!!!
We are tied pic.twitter.com/DqffUIGOkW

Lee made all four of his shots in the fourth. It included a runout layup when Stanton pocketed a steal on Haven’s first possession, then Lee pilfered the inbound pass and laid up for two and Euro-stepped to a basket on the next trip, a personal 6-0 run to put Penncrest up, 41-33. He was also 4-for-4 from the line, tallying a game-high 23 points. Stanton scored 16 points. Cage had the other three, all from the line. The Lions played just five guys until Chase Wilson, the other varsity debutant, fouled out with 2:53 left.

Behind Luke Edwards’ 17 points, Robbie Guilday had 13 and Shuler 12 for Haven.

The ability to rally has been a theme for Penncrest, fresh off a beating by Marple Newtown and an uncharacteristically spotty start. The lesson of Tuesday’s resilience is what they’re trying to apply to the campaign.

“It’s going to let us know that even if we start off bad and start off rough, for our record (on the season) and in games, that we know what we’re capable of and we can beat teams,” Lee said. “This win is going to get guys ready and get focused.”

Garnet Valley 68, Lower Merion 52 >> Justin Langan scored 15 of his 20 points in the first half, and Carl Schaller added 15 points as the Jags scored 28 points in the fourth quarter.

Ryan Wooten had 11 points, and Gannon McKee added 10 for the Jags.

Radnor 58, Harriton 37 >> Jackson Hicke scored 13 of his 18 points in the third quarter to help Radnor pull away. Lewis Robinson led Radnor with a game-high 21 points.

Chester 85, Interboro 31 >> A 29-point outburst in the first quarter got the Clippers off to a fast start. Karell Watkins led the Clippers with a game-high 21 points. Fareed Burton pitched in with 19 points. Jameel Burton (15) and Qadir Lowrie (10) also reached double figures.

Will Delaney led the Churchmen with 17 points.

Delco Christian 50, Bristol 23 >> The Knights rode a strong defense that held the Warriors to single digits in each quarter.