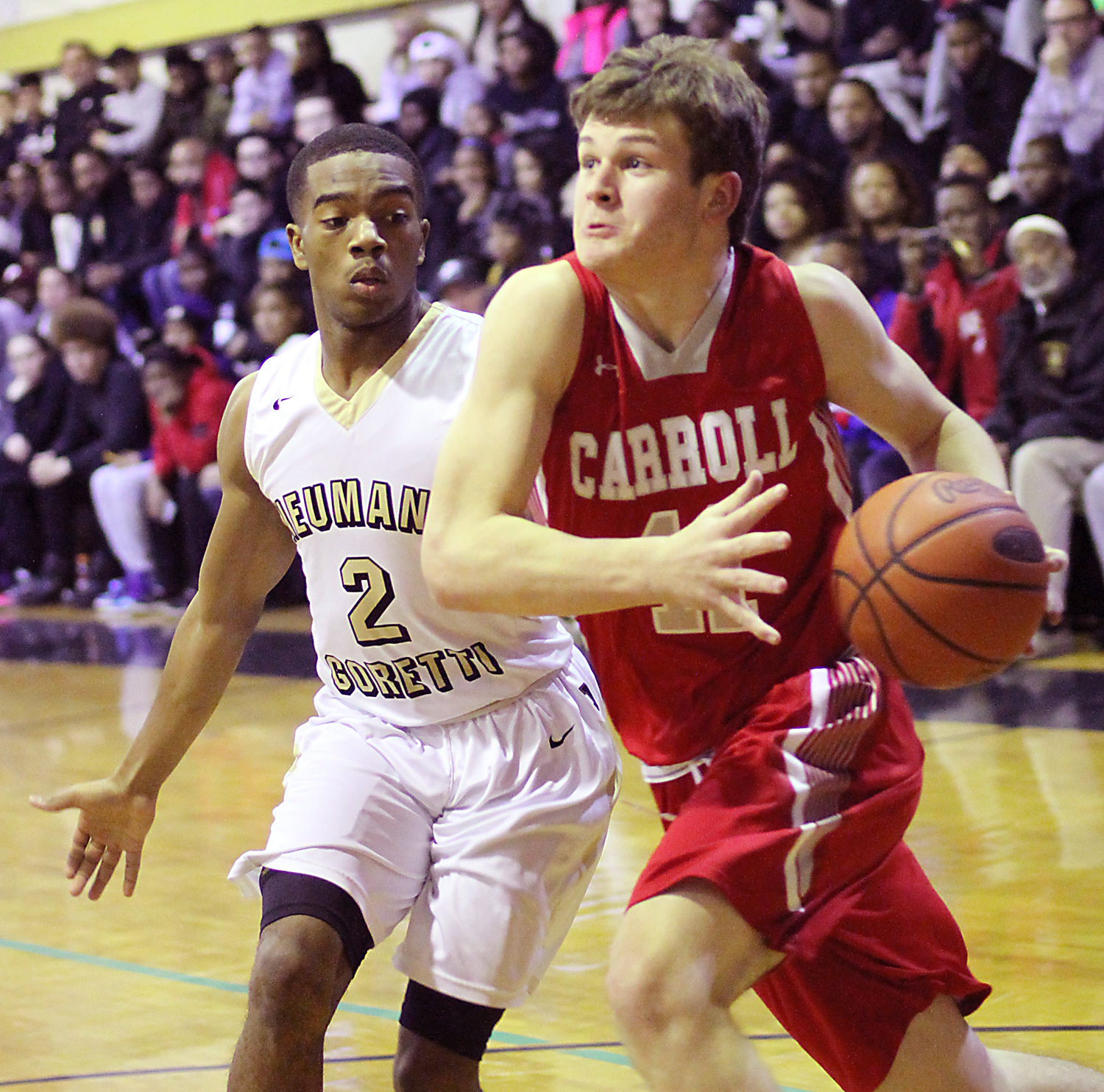 PHILADELPHIA >> In the swirl of recruit-rating stars and blue-chippers that has defined Neumann-Goretti’s storied program for the last decade-plus, it’s easy for a senior guard with just two Division I offers to fly under the radar.

Friday afternoon, though, there was no underestimating Rasheed Browne.

Archbishop Carroll’s Josh Sharkey dries to the hoop for two of his 17 points, but the Patriots fell to Neumann-Goretti, 98-75, Friday. (Times Staff/Robert J. Gurecki)

Browne scored 20 points, including three second-half 3-pointers, to distance Neumann-Goretti from Archbishop Carroll in a 98-75 win.

On a Saints team with well-known weapons like Zane Martin, Quade Green and Vaughn Covington, opponents may overlook the shooting threat posed by Browne, more known for his defensive tenacity.

But on an afternoon where defense more or less went out the window and Browne was saddled with early foul trouble, he had to find other ways to contribute.

“My teammates look for me. I was in foul trouble in the first half, so I had to come in stronger, play harder,” said Browne, whose Division I interest is from Morgan State and Florida-Gulf Coast. “… That’s what I knew I had to do this game, shoot more, because I wasn’t scouted for shooting, I heard. So I came in looking to shoot the ball more.”

Browne canned his first triple in a 12-3 Saints run to open the half, punctuated by Dhamir Cosby-Roundtree’s alley-oop in transition. That spurt burst open what had been a three-point halftime spread in a contentious battle for Catholic League supremacy and a repeat of last year’s PIAA Class AAA final.

Browne then hit a pair of long balls on a 10-4 run to start the fourth, the last one stretching the lead to 80-62 and banishing any hope of a Carroll comeback.

“It makes it easy for all of us, because we all look for each other to shoot the ball,” Browne said. “That’s why we’re hard to guard.”

“He’s been a glue guy for us,” Neumann coach Carl Arrigale said. “He’s been rock solid. He gives us that extra shooter. He’s a good ball-handler, so we have four guys to break the defense down, and if they don’t have four guys who can defend the dribble and we have a lead, we’re hard to catch.”

But Browne’s efficiency at 7-for-9 from the field and 4-for-6 from 3-point land stood apart. In a game played at breakneck speed yet remarkably mistake-free — each team committed just nine turnovers — Browne’s halfcourt execution was a valuable contrast.

Part of Browne’s offensive contributions sought to rectify his less than stellar defensive day. He was one of those tasked with slowing Ryan Daly, which no one did with much effectiveness. Daly poured in 33 points, but he slowed after halftime and converted just two of 10 looks from 3-point range.

The issue wasn’t so much Daly tiring as the lack of other options. Josh Sharkey played through foul trouble admirably, broaching a triple-double with 17 points, nine rebounds and nine assists. Miks Antoms provided a boost after halftime, scoring the Patriots’ first six points of the third quarter en route to 12 points and seven boards. And John Rigsby added 10 points.

But as both Daly and Arrigale illustrated, that math didn’t compute for Carroll (15-2, 7-1). Wing players Colin Daly and Alex House combined for just one field-goal attempt, a missed two.

“They have five guys on the floor that can score the ball,” Daly said. “When they have that, there’s going to be mismatch problems all over. …

“If you’re not ready, sometimes it’s 5-on-4, it feels like, if they leave or double someone. They play great defense, and we weren’t ready for it today.”

Carroll battled to keep it close, getting as close as 46-44 in the final minute of the first half on a pick-and-roll from Sharkey to Antoms. But the Saints wrested control after the break.

As is often the case in this one-sided rivalry, Carroll can take solace in the possibility of another shot at the Saints, either in the Catholic League tournament or PIAA playoffs.

If they get there, the lesson to glean from Friday is clear.

“We didn’t play good defense at all,” Daly said. “We couldn’t contain them. Credit to them, they hit a lot of shots. They hit clutch shots. They were good from 3-point range. We’ve got to play better defense.”

Chester 78, Chichester 55 >> Marquis Collins posted a double-double of 12 points and 15 rebounds, scoring 10 points in the third quarter as the Clippers (11-6, 6-0) dominated the boards to pull away late.

Maurice Henry added a double-double of 10 points and 10 rebounds, and Khaleeq Campbell scored 13 for Chester.

Ridley 39, Haverford 37 >> Brett Foster did most of the damage for the Green Raiders with a game-high 20 points.