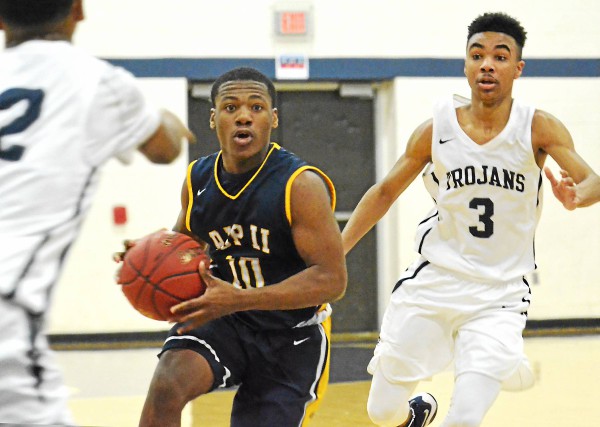 POTTSTOWN >> Early in the fourth quarter Friday night, Anthony Brown put up a free-throw attempt that caught nothing but the backboard.

Unfazed, he took two steps back, collected himself, then stepped back up to the line and drained his next attempt.

After what began as a dreadful shooting night for the Pottstown junior, Brown hit the biggest shot of the game — a game-tying 3-pointer with 19 seconds left to force overtime where the Trojans pulled out a 67-63 win over Pope John Paul II.

“I was struggling in the beginning, but my coaches, my teammates told me to just keep shooting,” said Brown, who scored nine of his game-high 20 points during the fourth quarter and overtime period. “My confidence got up higher and higher as the game went on.”

Brown knocked down a key 3-ball with just under two minutes to go in regulation as the Trojans rallied back from five down to end the quarter on an 8-3 run and push overtime at 53-53.

“That’s his game,” said Pottstown head coach Cal Benfield. “We told him, ‘Keep shooting, keep shooting.’ He was off, but we know what he’s capable of — he’s a clutch player that can beat you in a lot of different ways.” Behind Brown, the Trojans picked up a much-needed win, thus ending their five-game losing streak that had extended all the way back to Christmas week. Pottstown moves to 2-3 in the Pioneer Athletic Conference’s Frontier Division and 4-10 overall.

With the loss, Pope John Paul II drops to 3-2 in the Frontier Division (5-9 overall), as the Golden Panthers have now lost seven of their previous eight.

PJP trailed most of the way before picking up their first lead of the night on a 3-pointer from Aidan McCarthy to make it 37-35 with four minutes left in the third. The Golden Panthers ended the quarter with a 46-41 lead, aided by McCarthy’s put-back layup just before the buzzer sounded. Pottstown never went away quietly, though. After PJP’s Tyshere Malachi opened the fourth quarter with a hard-fought bucket in the paint, the Trojans went on a 12-5 scoring run capped by a bucket from Tyshaun Harvey to tie it up at 53-53 with 1:40 remaining.

“We’ve got to do a better job of closing out games,” said PJP head coach Matt Rafferty. “We had them in a good spot late, but we couldn’t put it away.”

Pottstown sophomore Tre Bass opened the overtime period with a hard-fought bucket in the paint, then later added a left-handed lay-in to give the Trojans a 60-59 lead, one they wouldn’t again let slip away.

Bass finished with 13 points — five during the overtime period — while point guard Floyd Dashiell added a steady 11 points on the night and Harvey had nine. “We fought back and kept fighting against a good team,” said Benfield. “When we were down (five) in the beginning of the fourth quarter, we just kept telling our guys to just keep fighting. Three baskets — the way we shoot and the way we can get up and down, we can go on a run and get that in a matter of a minute.”

It was a night of missed opportunities for PJP. The Golden Panthers finished 6-for-14 from 3-point land, but didn’t knock them down when they needed it most. PJP worked a wide-open look from deep but couldn’t convert just before the end of regulation. “This one’s gonna sting a little bit,” said Rafferty. “I didn’t think we played well. We’ve got to have our best practice of the year when we get to it on Sunday.”

La Salle has no answers for Archbishop Wood’s defense
Dixon scores 31, powers Abington past Cheltenham in second half