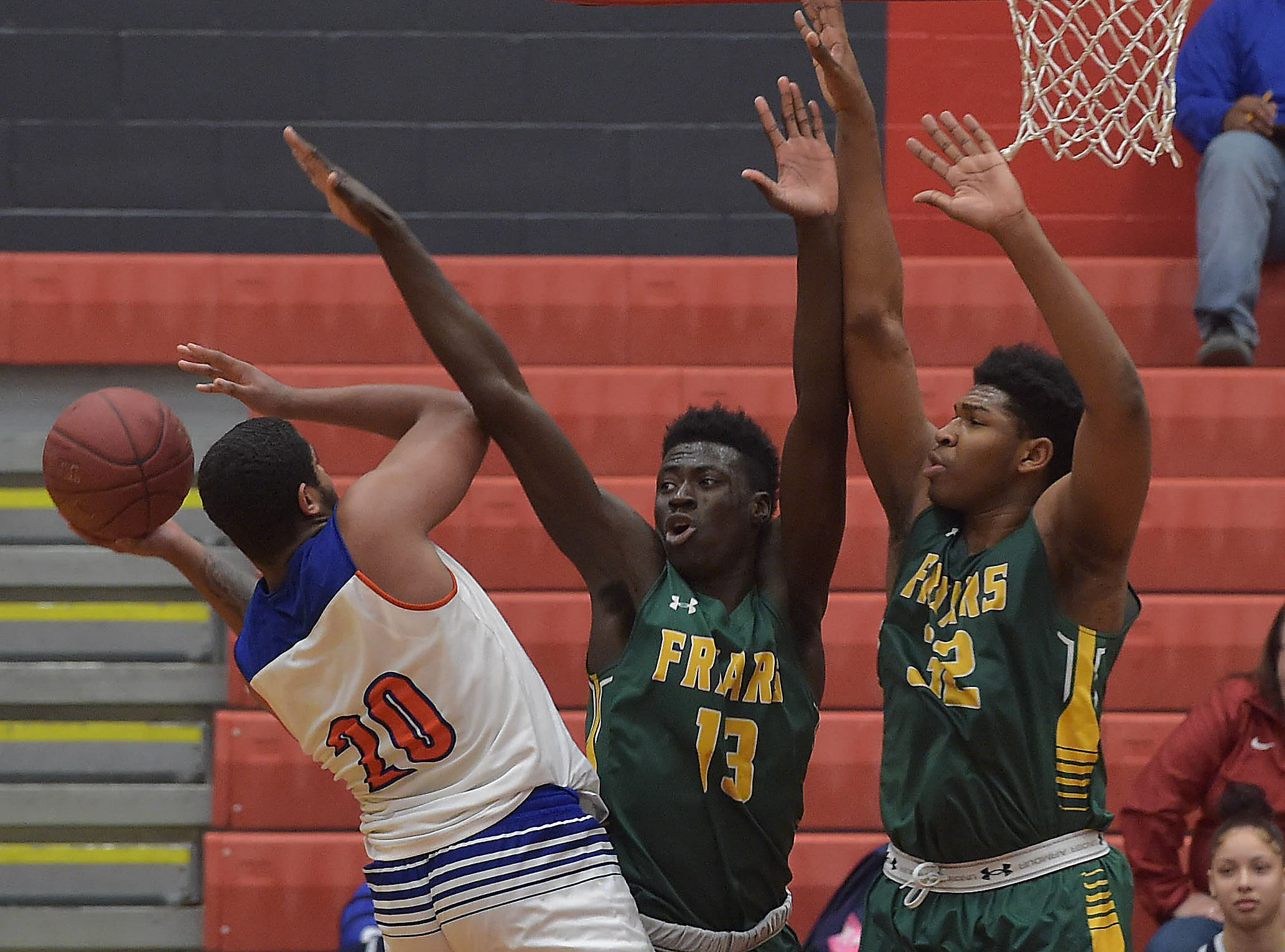 READING >> For the first half Friday night, even as Bonner & Prendergast owned the distinct height advantage, a smaller, scrappier Allentown Central Catholic team held court in the lane.

It might have cost the Vikings plenty of fouls in a physical PIAA Class 5A quarterfinal encounter, but as the teams recessed to their locker room, the Vikings could feel good about the seven combined points allowed to the Friars’ imposing duo of Ajiri Johnson and Tariq Ingraham.

As they regrouped at Reading High School’s Geigle Complex, the Friars talked about renewing the fervor in the paint. When they did it, they finally created space on the scoreboard.

Johnson and Ingraham rebounded for a strong second half, and the finishing of Isaiah Wong at the line ensured that the District 12 champions marched on, 71-61.

“Before the game started, doing the stats, coach told us the game is going to be won inside with the big men. And he was right,” Johnson said. “We needed to get their bigs into foul trouble because they had nobody to guard us down there. They were good offensively, but defensively, they weren’t as strong.”

Johnson tallied 15 points and nine rebounds, with Ingraham shrugging off a 1-for-6 shooting first half for 11 points and eight boards. Each player contributed five points in the third quarter, as the Friars (25-4) never trailed but had to fend off the game District 11 champions.

Most importantly, Johnson and Ingraham shot a combined 16-for-22 from the line, as Bonner & Prendie went 35-for-44 at the stripe in the face of 24 Allentown fouls, including six mistakenly allotted to ACC big Keeshawn Kellman.

In the first half, though, Kellman was the one who ruled the paint. The senior — very generously listed as 6-8 — had five points and three blocks, including consecutive rejections of Ingraham on one possession. But the Vikings (25-5) are thin in the post, so when he — and wing Jordan McChristian, and backup forward Kevin Kern — were each saddled with two first-half fouls, Bonner saw the opportunity to attack a weakness until it became a strength.

“Our big men are fantastic,” Wong said. “Just to get our bigs going and get their big in foul trouble with all those foul calls, it was going to give us the win easy.”

“With us big men, it’s just to get that first bucket to get you going,” Johnson said. “Once I got my first foul to shoot free throws and knock it down, after that I got in my groove. I started going straight at the bigs, getting fouls, going to the line, making foul shots, just create my own baskets and keep myself going to keep my team going.”

It’s a good thing the Friars did, because the longer they let the Vikings stay around, the more danger they posed. B&P scored the game’s first eight points and never trailed from there. But ACC tied the game in the third and got within one early in the fourth quarter. Every time the Friars threatened to run away, the Vikings had an answer.

B&P stretched the edge to 29-16 just before halftime, but ACC scored the last seven points of the frame, aided by a Dat Lambert triple. Another Lambert trifecta tied the game at 29 in the third. Bonner & Prendie promptly answered with six straight, then five from ACC.

It appeared the Friars had the edge when Wong drove to the hoop to make it 46-40 after three quarters. But ACC didn’t give up, thanks in large part to 17 points on four 3-pointers from Jay Vaughn and 17 bench points from Chad Kratzer. It was only when Wong beat them into submission that they finally tapped out.

“In the fourth quarter, I was thinking, ‘it’s too close of a game.’ I was thinking, ‘I don’t want to end the season like this,’” Wong said. “So I took the ball and tried to take as many high-percentage shots as I could.”

Wong scored 18 of his 27 points in the second half, including 13 in the final quarter. He was 14-for-16 from the line, including 11-for-12 in the fourth, taking control of the ball and never letting ACC back in.

“It’s amazing because he can knock shots down, knock free throws down, so there’s nothing you can do to stop him,” Johnson said of his junior point guard. “It’s not like you can foul him and he misses foul shots. He’s going to knock them down so you’ve got to play him honest. Most times, the guards on the other team, they can’t really guard him.

“So we just give him the ball, space out, take the time off the clock and you either foul him or he’s going to get his basket. Either way, it’s a plus for us.”

Wong added seven rebounds, three assists, two steals and two blocks. He sparked the 8-0 run in the fourth quarter that put the game out of reach and kept it there with his near-flawlessness at the line.

All of which leaves the Friars, in their first states appearance, two wins from a state title.

“It’s amazing,” Johnson said. “I’ve never been to states before so this might be my first time. It’s amazing because the whole school is talking about it, the whole community. We had some fans out here that drove two hours to watch the game. … Everybody’s hyped about it, so that’s good for us.”

Top photo: Bonner & Prendie’s Ajiri Johnson, middle, and Tariq Ingraham, shown during a Friars win over William Penn York Tuesday, combined to take over inside the paint as the Friars ousted Allentown Central Catholic Friday night in a PIAA Class 5A quarterfinal game.