Bollinger’s big threes are a key for Ridley 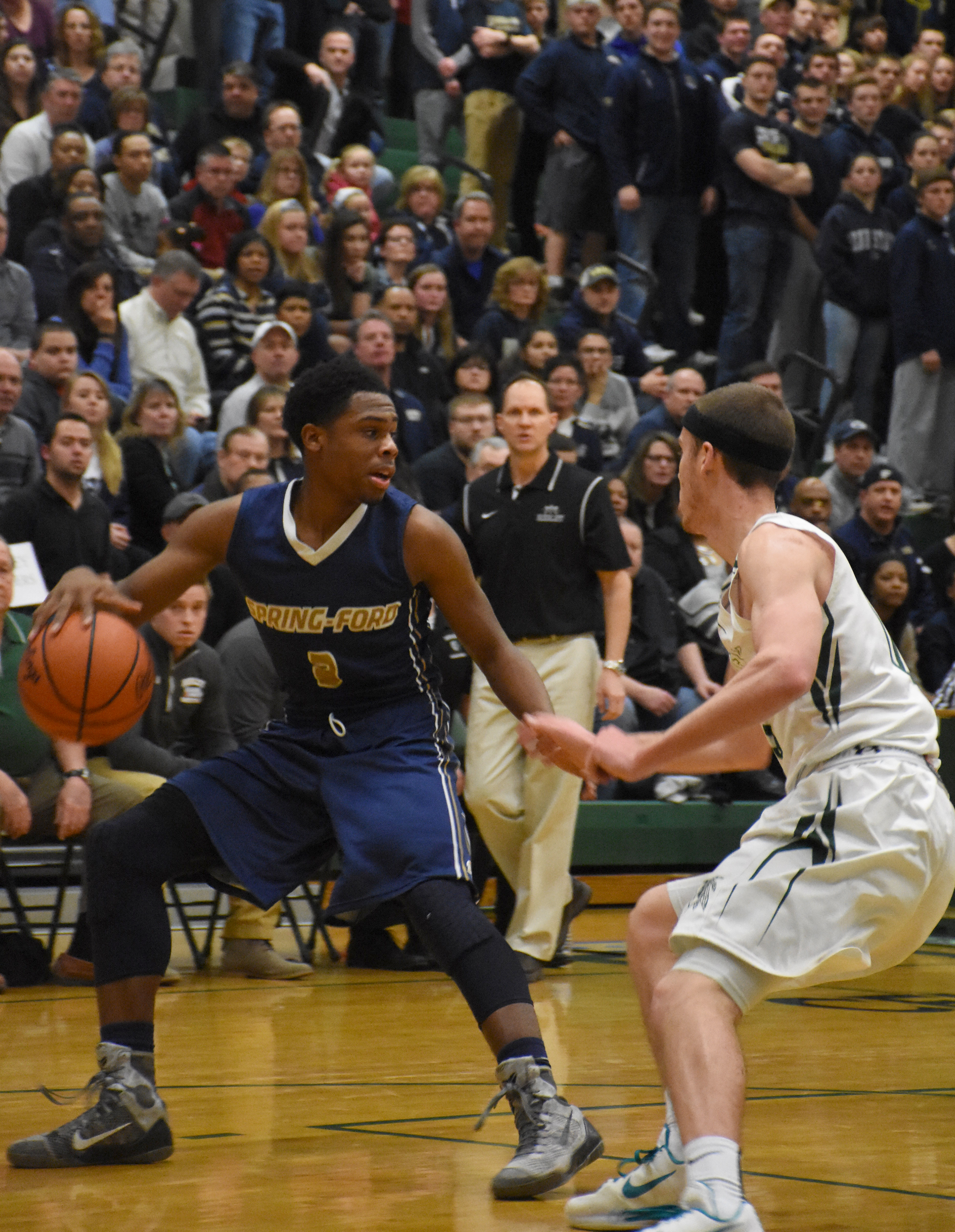 udes a quiet confidence when he’s on the basketball court.

The Ridley senior doesn’t need to say much, he just lets his play do the talking.

Bollinger’s quick wrist was a destructive force in the fourth quarter of Ridley’s 54-50 victory over No. 12 Spring-Ford in the quarterfinal round of the District One Class AAAA tournament Friday night.

The fourth-seeded Green Raiders advance to the district semifinals for the second consecutive year. A showdown Tuesday night with No. 9 Chester at Temple’s Liacouras Center awaits.

If it wasn’t for Bollinger’s cool delivery from beyond the arc, who knows if the Green Raiders survive the Rams, who returned from the dead after a woeful start. The visitors stormed back from a 17-2, second-quarter deficit, eventually grabbing a pair of short-lived, one-point leads in the final stanza. And the only reason they couldn’t build on their advantage was because of guys like Bollinger, who came through in the clutch.

Bollinger’s first 3-pointer of the fourth quarter gave Ridley (25-1) the lead to stay. Liam Thompson swished one from long distance moments later, and Bollinger’s second trey with 2:20 to go was the dagger.

“It’s huge,” Bollinger said. “None of us can be nervous when we’re taking shots, but we have to be confident. Every time we hit them, it’s a huge momentum swing because the crowd goes wild and we get ourselves pumped up.”

The long ball was the Green Raiders’ ticket to the district final four. Never mind that All-Delco Brett Foster was magnificent, particularly in the first quarter, when he scored 10 of his game-high 20 points. In the first half, Foster accounted for five of his team’s nine field goals. The low point for Ridley was an anemic second quarter that turned what could have a been a blowout into something far more exciting and nerve-wracking for the Ridley faithful. Spring-Ford didn’t go away, Foster cooled off a bit and there was some doubt that Ridley could hold off a furious comeback by the Rams, who trailed by three points going into the fourth quarter. And the primary reason Ridley was in front to start the final period was because of Julian Wing, who ignited the barrage of 3-pointers with two of his own in the third quarter.

“Every time we hit a 3, it gives us energy,” said Wing, who had 11 points, four rebounds and two steals. “We work on our 3s every day at the end of practice. It’s a lot of hard work… and when we’re in the game, we just have to keep trying and staying with it.”

Seven of Ridley’s final nine baskets were from long distance.

“We know it’s a game of runs. We made our run and they made their run. So, it came down to who hit shots when it counts,” Foster said.”Big ups to the people who knocked down the 3s. They gave us the momentum to start back up and give us the lead again.”

It’s in Ridley’s DNA not to get rattled. When things get tough, the Green Raiders find a way to rise through the pressure. Friday night, it was their collection of sharpshooters that pulled them from the jaws of defeat.

“It’s kind of their personality,” Ridley coach Mike Snyder said. “We might go through a whole practice and some of the kids might not say three words. They’re pretty mellow. We just don’t think they get nervous or panic in some situations. For Ryan, this is second year on varsity, (and) he’s played in a ton of (big) games. Julian and Brett have been playing varsity games since they were freshmen. They’ve all been around and have a lot of games under them.”

Bollinger doesn’t care where he gets the ball. He drilled both of his fourth-quarter trifectas from near the corner.

“I believe I can hit them from anywhere,” he said. “I’ve been camping down there.”

Bollinger said he learned to trust his shot simply by playing and being more involved in the offense. He finished with 11 points Friday night.

“Last year we went on a big run, so that helped a lot,” he said. “It was fun last year, we played in front of big crowd every night. So nothing really fazes me right now. Every time I shoot the ball, I’m confident and feel I can overcome anything and not be nervous.”

That could mean bad news for Chester.